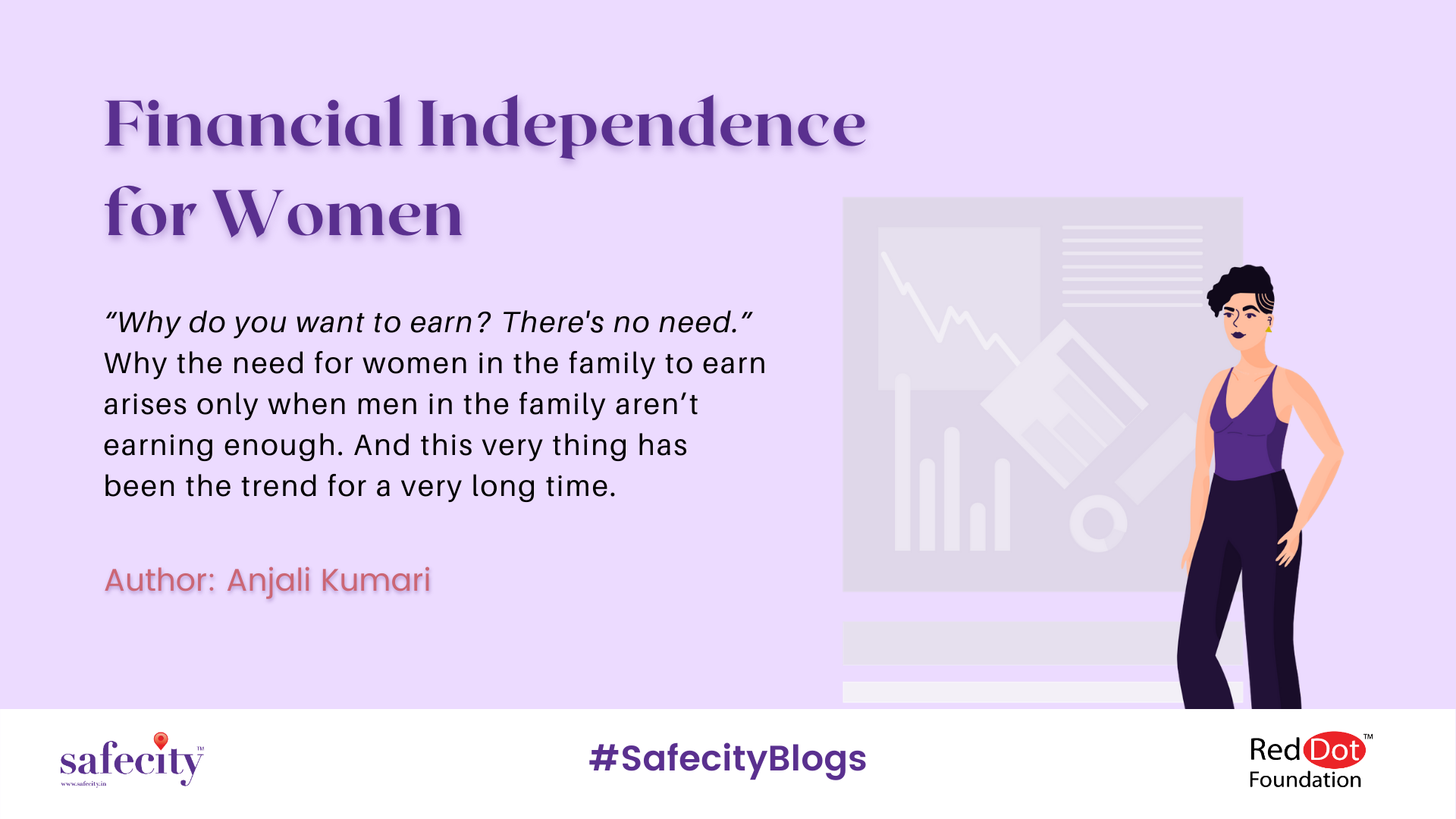 Finance & Women, Safecity Blogs
Comments are off for this post

“Why do you want to earn? There’s no need.” Why the need for women in the family to earn arises only when men in the family aren’t earning enough. And this very thing has been the trend for a very long time. “Just because you are earning does not imply you have an upper hand”, “You are not doing us a favour”, few of the common rants a specific gender is told. While as much as we can recall, in a patriarchal society, the gender who earns did have an upper hand and was doing a favour to the other gender. And yes the earning one should preferably be a man because that’s what the ‘man of the family’ does. The structure has so been designed that a man should head the family. Yes, we know women who head a family, but they are more often than not called the “man of the family”, making it more satirical than ironic. So you can’t be the woman of the family and still head the family. Not in favour of these heading trends but yes this trend is quite too gender-specific. “Don’t try to be the man of the house!” Ahem. Women often are told this for being opinionated irrespective of the fact if they earn or not. Because having opinions and taking decisions are in the man of the family department. And we call earning and opinionated women ‘proud’, which obviously is a compliment because a woman should be. Our attitude towards women who aren’t financially dependent is so sick, that even if they start earning that doesn’t change much, but obviously can boost up their confidence. Of course, it is a woman’s choice, if they want to earn or not, but in society, men do not have the same options, and the financially dependent woman can be called a parasite anytime, crushing her self-worth. We are progressing but still, these developing society challenges exist.

Why should women be financially independent? So that they do not have to rely on others for their basic needs, so that they can decide for themselves, can be confident of their existence, and do not have to compromise. And because a woman should not just get married because it’s her age, but because she actually wants to. Even if genders are equally dependent on each other, our society has been made such that financial dependence on gender has resulted in age-long oppression and compromise. In the patriarchal set up, if a man is earning, he just earns, but if a woman is earning, she still manages the household and kids along with earning without expecting any help. To what extent is this system justifiable? And just so that women never raise this question or ask men to help, they have simply been denied the right to be empowered and know that they are allowed to get educated, earn and be opinionated. The idea has been infused in their minds for so long that they belong to the second-class citizen group, that they do not even question the credibility of men and have themselves instead become the watchdogs of this patriarchal system. There are still many earning women who are not empowered and do not question the man of the family, because of this infused mindset. This does not qualify for financial independence. This patriarchal setup has not just resulted in the oppression of women but also men, we as a society have come so far in deciding roles that we impose on both men and women oppression of specified responsibilities, making one the victor and the other the victim, oppressing both the genders. Financial independence is important for a woman so that she can be independent and empowered without depending on the mercy of the other gender she is dependent on.