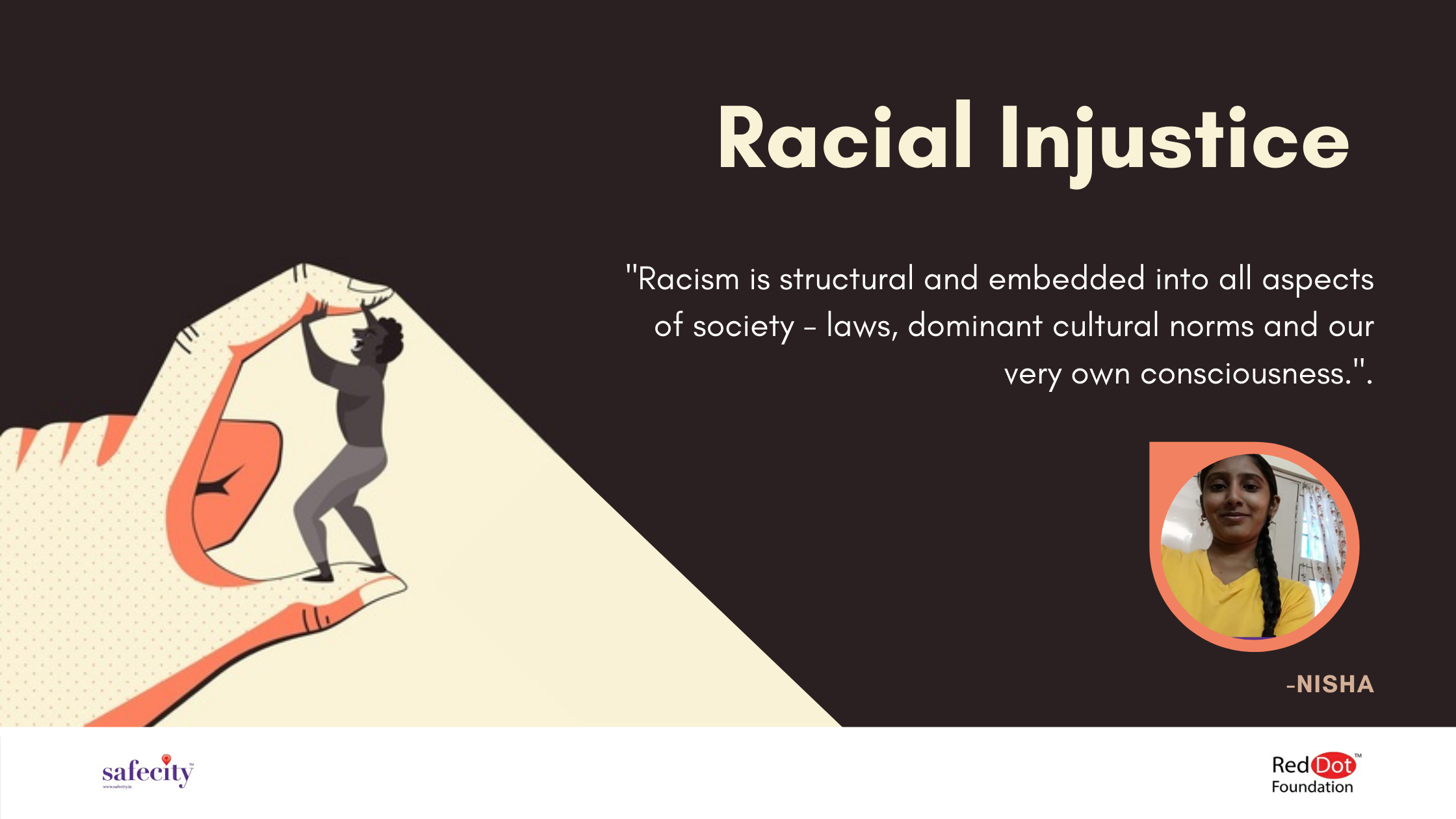 Nisha is a feminist who believes that small things make a big difference. She is passionate about singing and dancing and is someone who has always wanted to chase her dreams. She pursued a course in Humanities and when most of her friends had gone to work in IT, Nisha, who had strong feelings to do work for social causes, was constantly searching for a platform to give back to the community. Working with Safecity as a social media and blogging intern has taught her punctuality, responsibility, time management, and the importance and joy of working in and as a team.

“Racism is the belief that a particular race is superior or inferior to another, that a person’s social and moral traits are predetermined by his or her inborn biological characteristics. Racial separatism is the belief, most of the time based on racism, that different races should remain segregated and apart from one another”.

Racial discrimination is any discrimination against individuals on the basis of their skin colour, racial or ethnic origin. Racial boundaries can involve many different factors (such as ancestry, physical appearance, national origin, language, religion, and culture) and may be set in law by the government or may depend on local cultural norms.

There are many similarities between racial and caste oppression. Racial inequality in America is much the same as caste inequality in India. Historically, both race and caste have been used to divide society in many ways to the unfair advantage of certain groups over others. The plight of African Americans is equivalent to that of India’s Dalits who still continue to be known as “Untouchables” in certain rural areas.

At this moment, let us take up the example of George Floyd and Rayshard Brooks. On May 25, 2020, George Floyd, a 46-year-old black man, was killed in Minneapolis, Minnesota, during an arrest for allegedly using a counterfeit bill. After the videos that were made by witnesses and security cameras became public, Floyd’s death triggered demonstrations and protests in many U.S. cities and around the world against police brutality, police racism, and lack of police accountability. With the increasing and ongoing “Black Lives Matter” protests and demonstrations, it is truly sad that a fortnight later, Rayshard Brooks, an American 27-year-old black man was shot and killed by an Atlanta Police Department officer on June 12, 2020. Brooks failed a sobriety test and the officers attempted to take him into custody. Following a tussle with a taser, in which Brooks grabbed and aimed at one of the officers in self-defense, he was shot by the officer.

Racism is structural and embedded into all aspects of society – laws, dominant cultural norms and our very own consciousness. We need to understand how individual acts of racism are a reflection of structural racism. Also, it is our responsibility to teach our children that racism is innately wrong.

In my opinion, all of us could be better allies by learning to keep our minds open, educate ourselves and those around us via social media, books, articles, movies, TV series, podcasts, TED talks. We could also donate to organizations and support businesses. It is also time that we stopped encouraging racist jokes.

We are living in a world of chaos, trauma, oppression, and injustice. It is high time to step up to dismantle them. In the coming years, no one should be discriminated against on any such racial grounds. Let the change begin with ourselves.