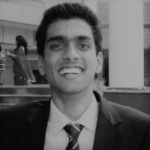 Rohan. S. Nadagouda is pursuing his Masters in analytics course. Previously, he worked as a Software Engineer with Cognizant Technology Solutions. He specialized in enterprise resource planning, software testing and data analysis. His great passion is to utilize data to make smarter decisions and drive performance. Apart from work, he is a football fanatic and is tech-savvy.

My interests apart from wrangling data are watching and playing Football, I might as well call myself a fanatic. I wanted to make a career jump to Data Science, so I was keeping an eye out for relevant fieldwork.

It was then that I got acquainted with Abhijith Asok through a social media group. After expressing my desire to work on analytics to gain some hands-on experience, he told me about the internship program at Safecity. I quickly got myself enrolled to work with their Data Analytics Team.

My initial mentor, Vihang Jumle, helped me with my first baby steps on working with datasets.

My first Project revolved around working on Facebook data. I analysed the data to map the time-pattern in which the videos and messages were posted on the Safecity Facebook page. The resulting analysis was useful for optimising the posting behaviour on social media.

My second project was in regard to geographic locations. With the help of Safecity’s crowd-sourced data, I created a heatmap to visualize hotspots of sexual harassment from 2012 to 2017 for targeted cities including New Delhi, Mumbai, Gujarat, and Hyderabad. The data visualization was used by Safecity team for conducting audits.

My third project involved text mining of tweets sent to and by the Safecity account to identify the most common words used by the Twitter handles. I also performed tweet analysis on the #GES (Global Entrepreneurship Summit) tweetchats that Safecity conducted as a part of the event for a span of three days, in the interest of comprehending the number of active participation of users, and the number of retweets and likes generated for each tweet.

The experience that I acquired through various projects helped me learn how to work with raw data and make relevant information out of it. I utilize this knowledge to build up more on my analytical skills as I pursue my higher studies in analytics. Working with Safecity has also helped on a personal level as it raised my awareness of sexual harassment, learning about this matter based on accurate statistics was an addition to my personal values and understanding of the social environment we live in.