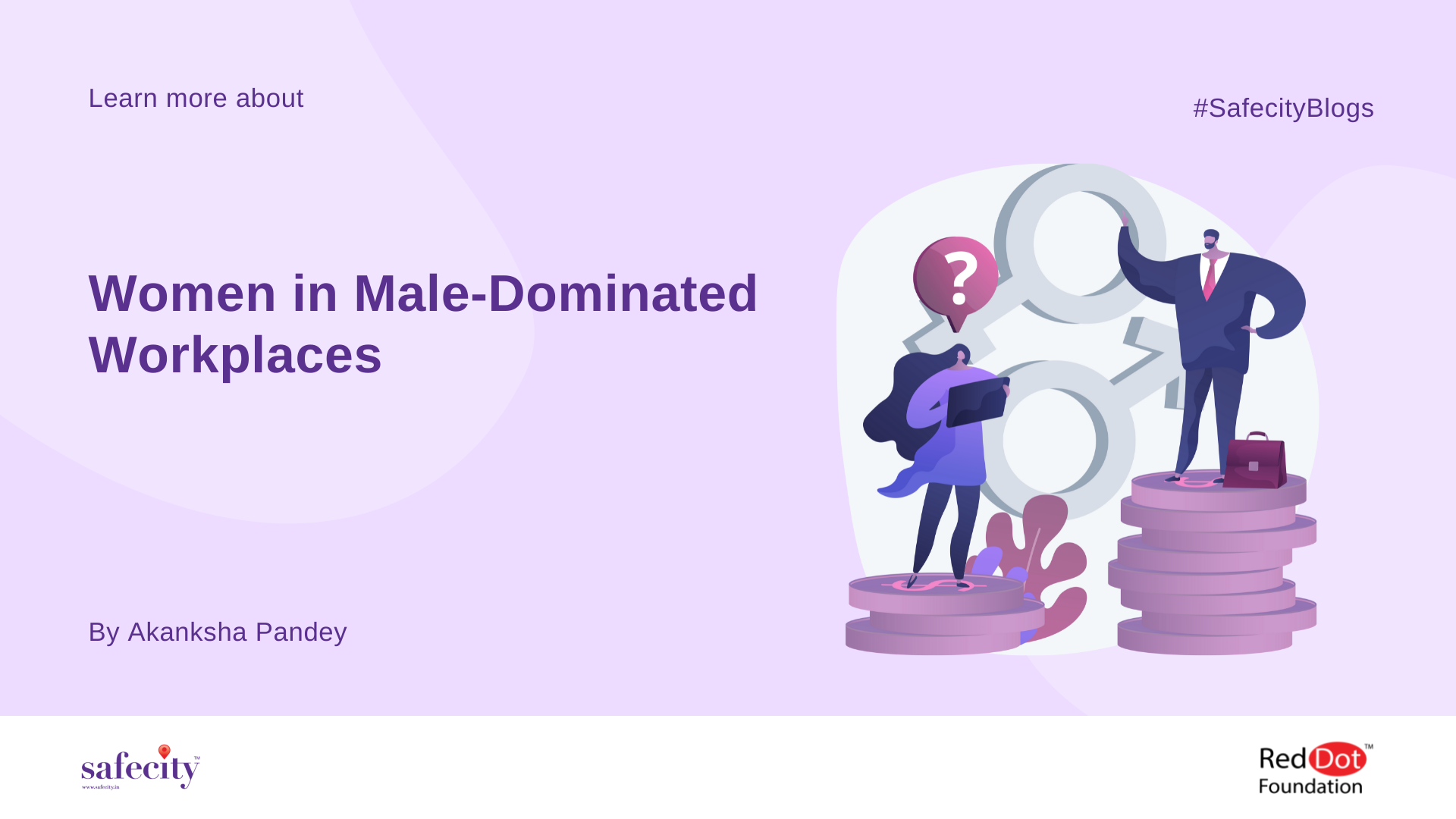 For eons, the egregiously gendered segregation of work across cultures dissuaded women from venturing beyond the socially deemed prudent role of a “caregiver” at home, in the manifold avatars of a mother, wife, daughter or a sister. Her mobility curtailed (both literally and metaphorically), even her recreational pursuits didn’t escape this gendered winnowing. And while the cacophony of “man advancing by leaps and bounds” grew stronger, the purported universality of the phrase ceased to gain any traction with the woman as she grappled with disparagement, unacknowledged domestic labour, systematic disenfranchisement  and sexist prejudices.

Today, as the woman gradually unfetters herself for a life beyond the confinement  of those four walls and traverses hitherto unchartered territories, she finds herself overlooking a rugged terrain. Clearly, the road’s slightly rougher when you identify as she. Women today are blazing trails across professional bastions that were until now the sole reserves of menfolk, but are their endeavours equally lauded? Aren’t their accomplishments belittled because of their gender? Aren’t they viewed as token representatives hired not for their professional competence but for amplifying the organization’s gender parity reports? Doesn’t the convoluted capitalist definition of what constitutes  productive labour conveniently downsize the magnitude of unaccounted labour women frequently indulge in?

According to a report published by the International Labour Organization, women’s global labour force participation rate at 48.5% remains 26.5% points below that of men, thus inevitably enlarging the fiefdom of “male-dominated workplaces.” Traditionally stringent divisions between soi-disant “feminine” and “masculine” works  based entirely on physical grounds steadily degenerated into gendered classification of intellectual labour, fuelling the nefarious propaganda of the supposed paucity of scientific temperament among women. The much neglected dialogue from the movie Titanic sums the chauvinism adequately, “Like I said, women and machinery don’t mix well!” No wonder STEM remains one of the most notoriously sexist fields with only 30% of researchers being women, according to a UNESCO report published in 2017.

Owing to the institutionalization of such appalling stereotypes, male-dominated workplaces often become the potential nidus for the perpetuation of misogynistic work culture. Besides, the absence of a significant women workforce further tends to bolster the otherwise unsubstantiated claims. Doubts about the leadership abilities of women anchored in the patriarchally conditioned stereotype of women being emotionally erratic, hence their propriety for subordinate ranks, insinuations of professionally successful women having “slept” their way to the top, deliberate cold-shouldering by male colleagues on grounds of alleged ineptitude and prevalence of sexual harassment substantially contribute to the tribulations of women working in male dominated professions.

According to a study spearheaded by American developmental psychologist Anita Raj, women in male-dominated occupations were more likely to report harassment or assault by a supervisor than those in predominantly feminine workspheres. The watershed #MeToo movement popularized in late 2017 when women resoundingly vocalized their hitherto muffled experiences as sexual harassment survivors empirically validates the enormity of abuse notwithstanding the constitutional safeguards guaranteed against the same.

Additionally, an inherent inferiority complex worsened by a hostile and sexually homogenous work environment afflicts many a woman with the dreaded “Impostor Syndrome”. It is essentially a psychological pattern triggering self-deprecatory feelings, disbelief in one’s own achievements and an internalized fear of being exposed as a “fraud”.  According to clinical psychologist Emily Hu, we are more likely to experience Impostor Syndrome if we don’t come across people sharing common denominators with us visibly succeeding in our field of work. No wonder, women with their unjustifiably severe self-censure often end up toiling longer than men exclusively to prove their potency, not merely to the workforce they lead but to themselves as well.

According to Lean In, a prominent US based organization focusing on women in the workplace, prevalence of chauvinistic dogmas ensures that the probability of women being hired and promoted to managerial positions in the corporate world remains comparatively low. Also, a workspace void of adequate participation by women is less likely to empathise with their social and biological concerns.  Traditionally, labour norms, productivity and routine across nations have evolved primarily from the perspective of the male body. Hence, their blatant disregard for women-friendly policies manifesting most evidently in the non-cognizance of menstrual labour as a form of productive labour. Interestingly, female government employees in Bihar have been availing monthly period leaves since 1992, a constitutionally validated right that still remains a pipe dream for menstruating employees across the other Indian states. In 2020, Zomato, an Indian food delivery company grabbed headlines for its laudable decision to grant 10 days of paid period leave to the menstruating employees who would like to avail it. The initiative elicited ambivalent response, while some endorsed it as a benchmark decision, others viewed it skeptically over alleged violation of “non-discriminatory workplace ethics” on grounds of sex and an attempt to strengthen biological determinism which might counterintuitively impede the realization of workplace equality. That the very definition of equality remains exclusionary in the sense that it is moulded around the notion of enforcing homogeneity as opposed to embracing diversity, still awaits public introspection.

All this is further compounded by the financial insecurity stemming from a conspicuous inequality in the average wages between men and women across countries. As per a UN report, women only make 77 cents for every dollar earned by men. Similarly, according to the Monster Salary Index (MSI) published in March 2019, women in India earn 19% less than men. The survey also revealed that the median gross hourly salary for men in India in 2018 was ₹242.49, while it was ₹196.3 for women. What particularly debilitates women both physically and psychologically is their persistent efforts to juggle domestic and professional obligations with equal ardour in conformation to the conservative societal expectations that views household chores as an exclusively feminine specialization. Women working especially in sectors that do not provide creche facilities and similar maternity benefits are not infrequently compelled to prioritise their maternal imperatives over personal ambitions which inevitably has negative repercussions for their career advancement. According to another Lean In report, 43% of highly qualified women are leaving their jobs or off-ramping for a period of time.

Although India’s maternity laws entitle working women with 3 months of paid leave and job protection, as per reports, India’s labour courts received more than 900 complaints alleging non-compliance on part of the employer to these norms. Despite the Himalayan impediments posed by the rigid system, women have never ceased to prove their mettle across professional bastions. From Flt Lt. Gunjan Saxena (Retd), former helicopter pilot in the IAF accredited with being the first woman to fly in a combat zone amidst the raging war at Kargil, grappling with the absence of something as rudimentary an amenity as separate washrooms for women during her tenure to Hungarian scientist Katalin Kariko, the pioneer whose proposition of leveraging the mRNA molecule for facilitating the manufacture of specific proteins that would generate precise antibodies for combatting particular antigens, a technique that has substantially augmented global vaccination efforts against the SARS-Cov2 virus was derided and rebuffed by the scientific community at the outset. These groundbreaking women have had their fair share of tussles with an environment blatantly skewed in favour of men, but they jostled through the thicket of patriarchal stereotypes to carve a niche for themselves.

Therefore, to better the present state of affairs and eradicate the existing discriminatory provisions on grounds of gender, it is imperative that organizations attempt to engender an inclusive workspace, carry out gender sensitization campaigns to facilitate stimulating conversations between men and women employees. This’ll go a long way in significantly fostering mutual cooperation, instituting gender friendly policies such as paternity leave to encourage equal parental participation in child rearing and establishing proactive sexual harassment complaint cells for efficient addressal of untoward incidents in workspaces. It is only when organizations reward merit irrespective of its gender identification can we truly achieve the potential output in any sphere.