Vital Voices was co-founded by Hillary Clinton in 1997 as a platform to advance the rights of women in three thematic areas – increasing political participation of women, encouraging economic empowerment of women and ending all forms of violence against women. They believe that communities can progress through the leadership, education and economic empowerment of women. 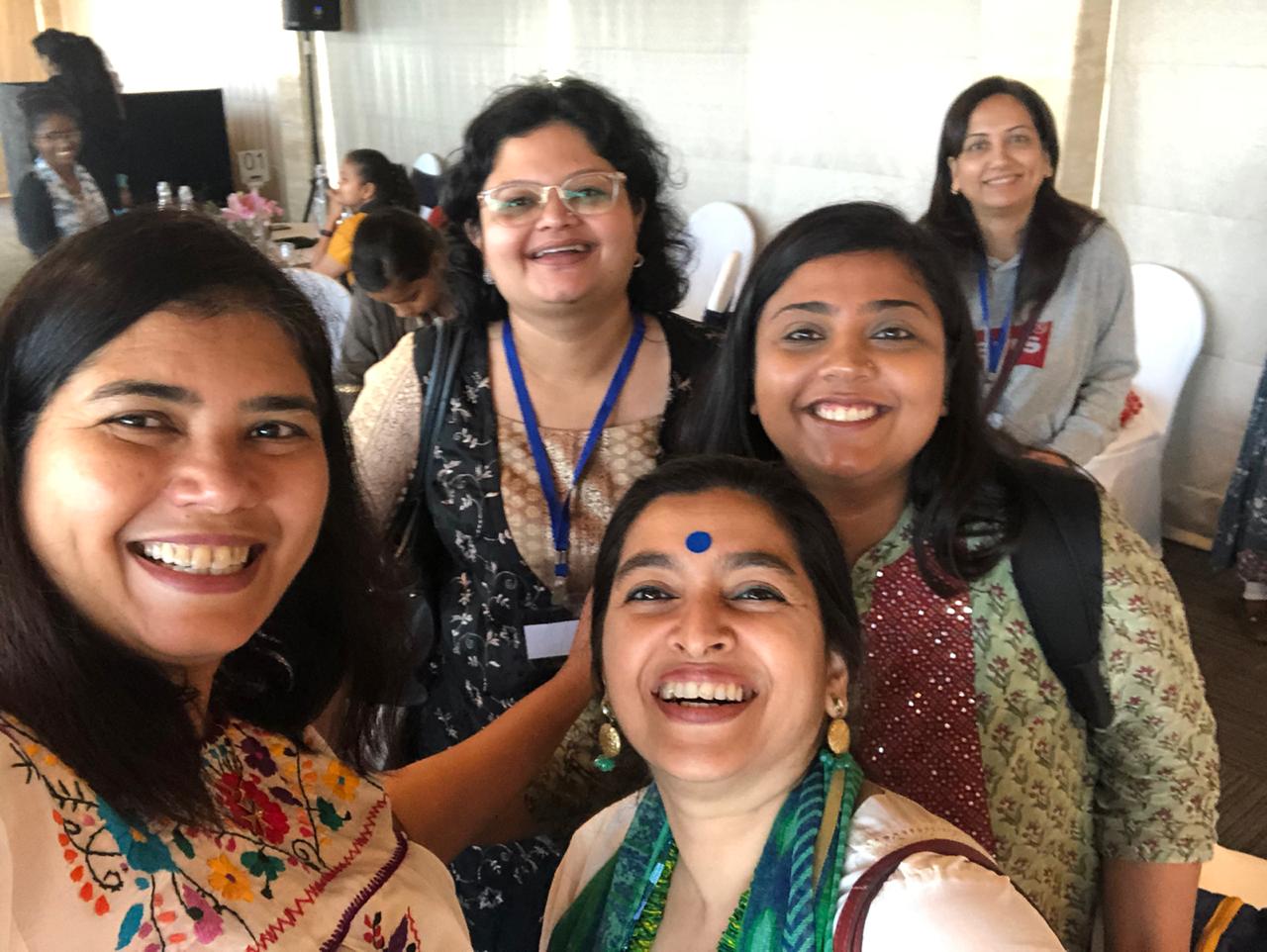 ElsaMarie DSilva, Supreet K Singh from Red Dot Foundation and Priti Patkar from Prerana Anti Human Trafficking Centre are Vital Voices fellows. Each year, around International Women’s Day, fellows from the Vital Voices network host a Global Mentoring Walk as a way to pay it forward. The idea for the “walk” originated when Geraldine Laybourne a business leader associated with Vital Voices encouraged young women to spend a mentoring hour with her during her morning walk. It was an efficient use of her time in a busy schedule, whilst supporting emerging women leaders. The walk being symbolic, continues to this day with Vital Voices members hosting over 150 walks each year in over 60 countries.

This year was the fifth edition of the Vital Voices Global Mentoring Walk in Mumbai. The Mentees were young women from the Prerana Anti Human Trafficking Centre, Save the Children, Sneha and Reality Gives. The Mentors ranged from Business leaders, entrepreneurs, journalists, architects, Diplomatic corps and development sector professionals. The 31 pairs were matched based on the mentee’s goals and aspirations and the mentor’s skill sets. Everyone felt they were perfectly matched, thanks to the tireless efforts of our team members who believe in the power of mentoring. 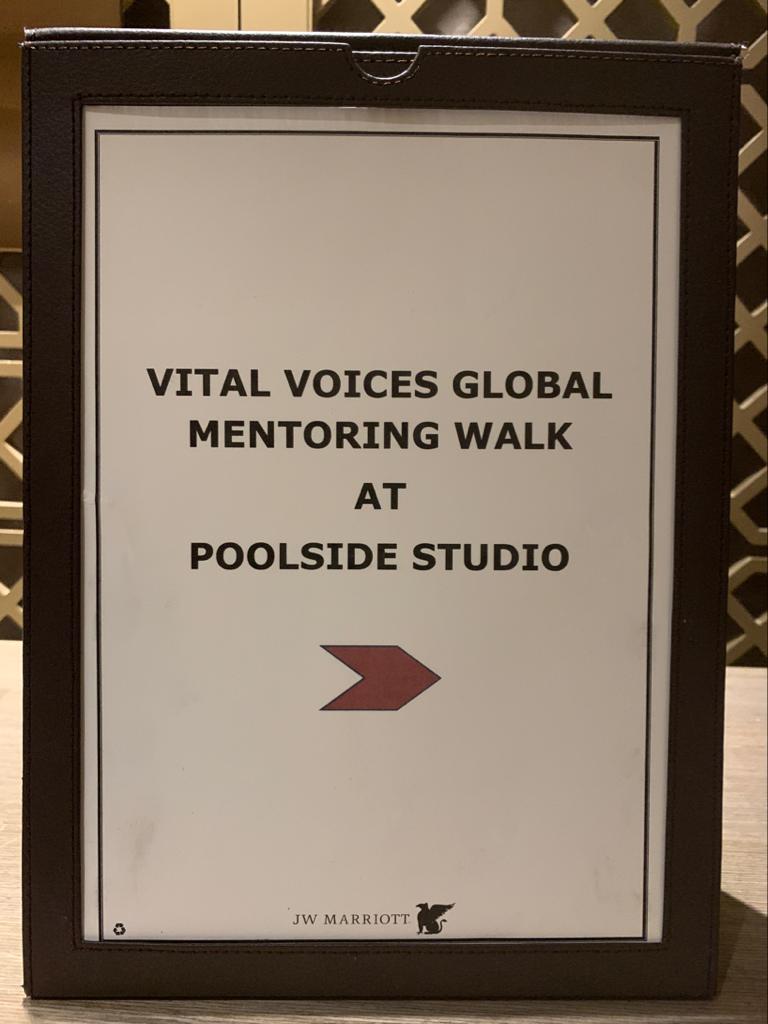 Set amidst the peaceful oasis of the JW Marriott Sahar poolside, it was heartwarming to hear the stories of both, the Mentors and Mentees, some, who had already been exposed to the previous mentoring walks that we had conducted.

It was incredible to see that one of the girls from the first mentoring walk is now on track to start her own NGO, while another has completed her Master of Social Work and is now going to pursue her PhD! Some others were wanting to pursue careers in Art, Science, Inclusive Education and Computer Science, among other fields. A majority of the Mentees expressed their interest to learn to speak English fluently and engaging with their Mentors gave them confidence and inspiration to speak it more often. 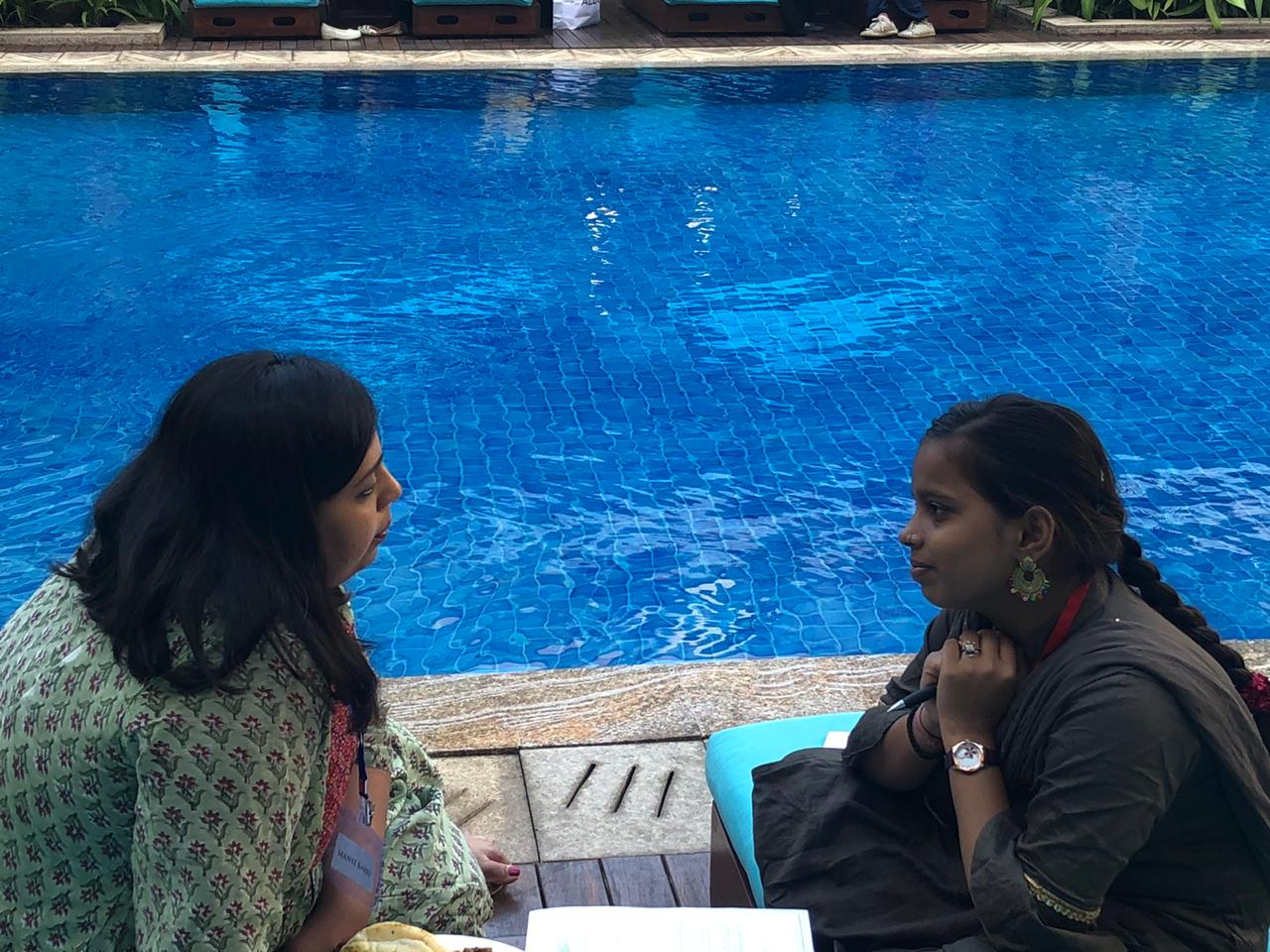 “I speak Hindi at home and Ma’am said I should start speaking English slowly. She said that I should not listen to those who discourage me from speaking. She said, “If you want to speak English, you speak it”.  – Mentee

It is through events like these, that we become aware of the resilience that is inherent in these young girls and how motivated they are to achieve their goals. Many Mentors remarked at how moved they were to notice that their Mentees didn’t look at restrictive families or financial constraints as barriers to them reaching their full potential. One of them stated,

“It was mostly among us Mentors that we were addressing these challenges. These girls on the other hand, didn’t speak at all about challenges. It is amazing to see how they don’t see any kind of challenges in their lives. And when one doesn’t see them as challenges, that is the best way to transcend them.” – Mentor 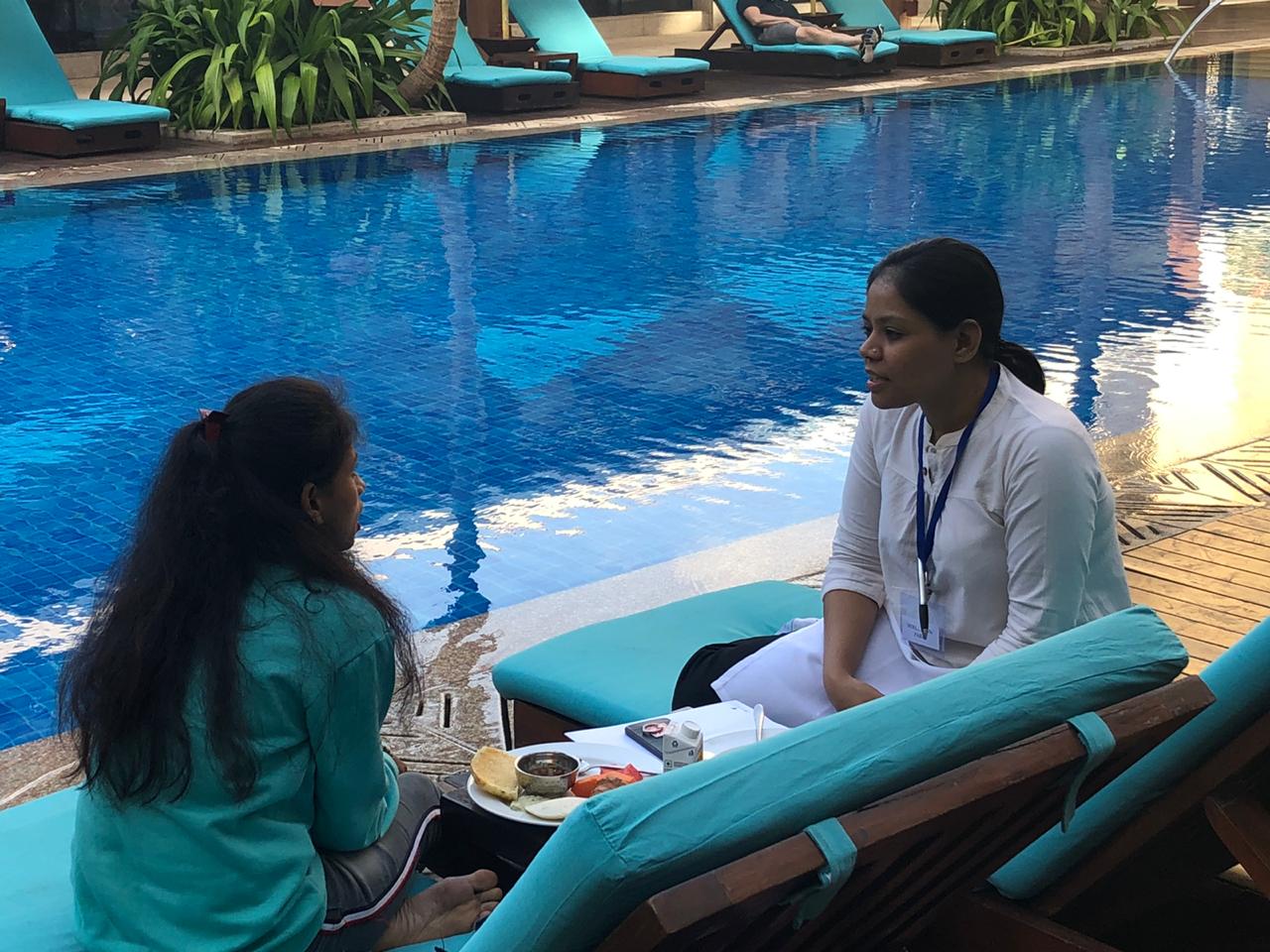 Worldwide, it has been found that when asked to quote their expected salary, women are more likely to quote a lower amount than men (Lipman, 2018). One of the reasons behind this is women’s lack of confidence in their abilities. Many of the Mentees and Mentors remarked that this was the common issue being addressed – how to present oneself, how to talk about one’s interests, how to speak with confidence.

“My Mentee and I have faced similar challenges. When I was younger, my hands would start shaking whenever I would start speaking in front of a large crowd. But she has such confidence and I told her that this confidence will take her a long way. All of them have made whatever hurdles they’ve experienced in their lives, their strength and want to bring their family with them through their successes. They don’t want to depend on their brothers or family members and are determined to achieve success by themselves.” – Mentor 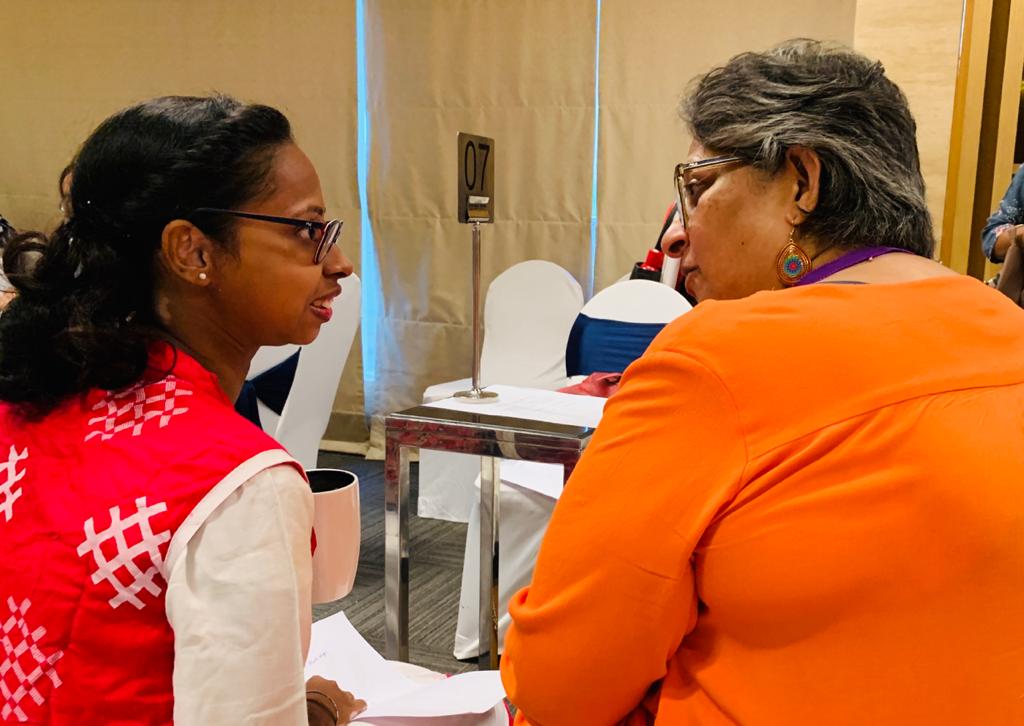 It was interesting to talk about the means by which the patriarchal system is ingrained in the wider context, in ways in which we can scarcely fathom. As Gayatri, a Mentee highlights,

“I was reading this book that says that women in Urban Design or in general, whenever designing anything are more of an afterthought. In scientific research they say that women are not included in medical trials because they think that menstruation will ruin the results. But at the end of the day this is 50% of the population that you are trying to serve.”

Even through language, male pronouns are used in abundance when referring to population in general. Mere coincidence? 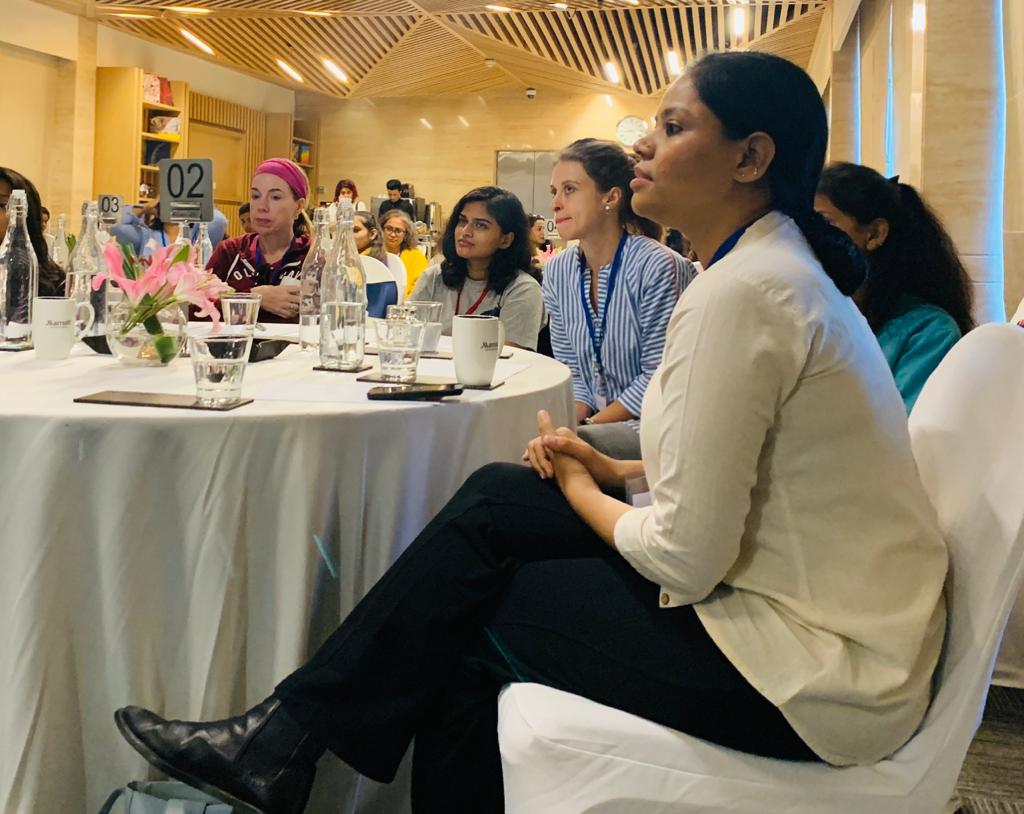 The day was filled with positivity and encouragement. In a space where women are encouraged to be themselves, to be bolstered by each other, the importance of female solidarity was strongly emphasized. Perhaps we can adapt the conventional saying to ‘Behind every successful woman, are successful women”. Below are some quotes by Mentors and Mentees on their experience:

“With my mentor, I feel that with the help that she has provided, I know that I will definitely achieve  my goal.” – Mentee

“My mentor told me that no, you need to be different. Everyone does the same thing, people need to believe that you’re different, that you can do things, that you can become someone. There needs to be that quality within us that others will look at and want to be like. It is important to speak and inspire others to speak with confidence as well.” – Mentee

“Two or three challenges that we highlighted were that access to knowledge and information and lack of exposure – what are my options. Even within a seemingly traditional career path like Fashion Design or Beautician’s course. I really liked seeing how change happens so gradually, you need patience, networks, friends…We need to remember that it’s one step at a time and that we should start today.” – Mentor

“No one was confused and said that they don’t want to do something. Everyone said, “This is what I want to do and I will keep doing it, I won’t back down.” – Mentee

“In my first year in college, I wasn’t very interested in studying and wanted to quit my education. But after the first mentoring walk I took my studies seriously ad later I could decide myself that I want to pursue an MSW. I realised my strengths and potential and that my voice will take me forward in life. Now, I got a mentor who has completed her MSW.” – Mentee