Views shared about a #positionofstrength

I had the opportunity to attend Twitter’s Position of Strength on behalf of Safecity. When I saw eminent personalities like Barkha Dutt, Meenakshi Lekhi and Aahana Kumra, part of panels in open discussions, I felt like it could not have been a better Women’s Day.

The first talk by Vijayanta Goyal, Meenakshi Lekhi, Barkha Dutt and Nistula Hebbar stirred some powerful conversations on legal and social aspects of women safety. All these inspiring women shared their ideas to bring in the change in their field of expertise. Police Officer Vijayanta Goyal talked about women in police, Meenakshi Lekhi expressed how political parties should start talking about things that matter and Barkha Dutt discussed #MeToo movement and how it didn’t work out that well in India. The Q&A round brought in more perspectives of the topic. When asked how media has helped in the revolution, Miss Dutt replied, “people have started talking about sexual harassment and this has made the task easier for media to report on similar issues, yet laws fall short in this case.” Post the discussion, I was able to have a conversation with both Ms. Lekhi and Barkha Dutt, who has been my idol since the day I decided to pursue journalism. 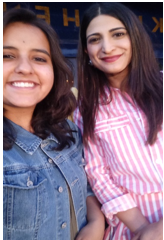 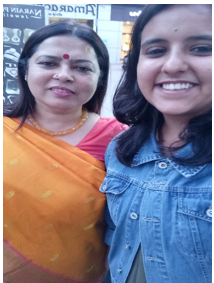 The conversation was followed by a more enthralling speech by Aahana Kumra where she thanked platforms like Youth Ki Awaaz which helped movies like Lipstick Under My Burkha and started the much required conversation on sex, how it’s still considered a taboo and why we should all “talk about sex, breasts, periods, dick, vagina and everything”. She also brought our attention towards the need for ‘more female editors, directors, DoPs, basically more female representation across the boards’ which could only happen “when we as an audience demand this representation and also support them!”

The next discussion brought in new perspectives of art, culture and caste with respect to gender. The panel included women like Anju Singh and Banu Pallickal who took the conversation to broader aspects of marginalisation of Dalit women and third gender. It was delightful to hear Shaili Chopra and her aim to bring the community of women in mainstream. The panel talked about how we are unable to target the little less privileged women across the country. 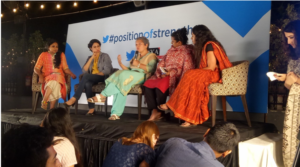 The event was called a wrap with an influential poet and her amazing poem on Strength. Twitter team later on thanked all the attendees, following which we had snacks and got an opportunity to have one on one interaction with all our speakers and representatives from various NGOs and other individuals. 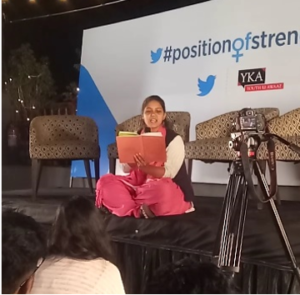