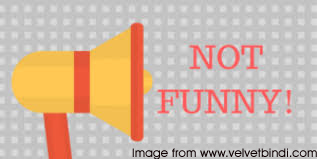 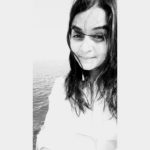 Khushbu Chotalia is a management graduate pursuing her masters in Psychology with an interest in its Cognitive and Social aspects. Currently a trainee at a brand consultancy in Mumbai, she applies her ideas on real time projects. The perception of women in society, and their perception of themselves interests her greatly. She feel that women’s issues need a stronger and more collective platform to be documented honestly, with a stress on facts. Safecity is the foremost activist in that domain, with its on-ground research work and attempts to map out unsafe areas in the city.
The ‘Why’ and ‘How’ of Sexist Jokes!
Have you heard jokes about women’s driving skills?

Or about how they bicker and fight in the locals everyday?

Or about how they do not like complimenting each other, because hell, women can’t draw attention to other women’s beauty lest their vanity come crashing down.

Were they forwarded on that WhatsApp group by an old uncle whom you really like but found these hard to digest? Or on your college group where many of your batch-mates, girls included, found it funny, and calling everybody out for it would mean risking being called a killjoy, so you preferred silence and being left with a bad taste in your mouth.

Remember watching a family comedy show without a single, often cheap comedic dig at women or homosexuals? On Indian TV channels, perhaps not. Here, these are assured to draw out laughter from scores of men and women who have been brought up thinking these were perfectly natural. These jokes have made the rounds of our society- the college groups, the laugh clubs, and family shows for decades.

Over time, from ‘Grow up, get an education, and then get married’ our society’s mantras changed to ‘alright, you can choose when to get married.’ Young girls are still advised to have a career or an education – but not too much of  it. ‘Beta, after all you will have to handle the household one day, pursue something you can do from home.’ Like a receding wave, our patriarchs are slowly, unwillingly giving up each of the rights of women they had held under their wings.

Should these little jokes matter anyway? Sexism, even in the form of tiniest jokes or statements about the most unimportant of things, acts as an unconscious force weakening the targeted community as a whole. According to a study, lesser women in Australia were interested in being Prime minister after Julia Gillard was removed. This change in attitude did not occur due to the sexism they personally faced but the sexist commentary directed towards another woman in a position in power that made them less likely to speak up or put themselves in the line of fire.

This is usually the first line of defence on being called out for a sexist joke.

So many of these seem made without the intent to actually offend someone. Does that mean we can afford to take it lightly?

Not meaning to be sexist is not the same thing as perpetuating the already prevalent stereotypes most of us have been railing against for years. The intent is not to demonize but to illuminate a behavior most of us have more than likely been guilty of at some point and seek to resolve it. In a 2012 report, the Human Rights Commission found sexist or offensive jokes were the most commonly reported form of harassment in Australian workplaces. So yes, it is a serious issue.

Surely they are not sexist if she laughs along as well?

Jokes about women are something that unfortunately men and women indulge in. But no, that does not make them any less sexist. This is about something more than her. Internalised misogyny is painful. It refers to the byproducts of the societal view of say women being ‘fussy’ or more prone to silly fights, that cause women to shame, doubt, and undervalue themselves and others of their gender.

If internalized misogyny were an intentional plan of patriarchy — which it isn’t; it’s just an automatic effect of it — it would be a brilliant one. It has led to women perpetuating the oppression imposed on them for centuries on other women, often younger ones. To recall a common small screen scenario, remember the Saas (mother-in-law) who terrorises the Bahu (daughter-in-law) if the food is even slightly off?

Why do these jokes still persist?

According to a study conducted in 2014 by psychologist Christopher Hunt, men who were asked to send sexist jokes to both men and women, clearly did not care if women were offended by them. However, they were highly sensitive to how they thought another man would react to them, reducing their use of sexist jokes if they thought a man would object.

What these results show is these jokes appear to have a “male bonding” function – that, primarily, men make such jokes typically to impress other men. This does not seem to be a very surprising result, perhaps because it was subconsciously known all along. These are comments through which men are constantly trying to appeal to their heterosexual male “in-group” as social psychologists call it, compared to the female and homosexual “out-groups.”
While the culture seems to be dying down as people become more aware at least in our metros, subconsciously, what do you think these are attempts are of?

This male bonding through sexist jokes and homophobic language may be an unconscious attempt to deal with a perceived threat. This threat perhaps emanates from the change in the relative status of women and gay men. In such situations, as research has long shown, the ‘putting down’ of those outside the group helps balance out the group’s insecurity due to challenging social scenarios.

How can you handle sexist jokes, in a practical manner?

First and foremost, remember to not lose your temper. Temper often makes your logic incoherent and your attacks personal. You might just be picking up a bait the person left for you.

Secondly, outrightly calling someone sexist only makes them defensive. Whenever possible, try calmness and empathy in your approach. Try to talk to them, not at them.

Thirdly, know that some people are here to troll. They will never let you have the last word. Let them go- they are lost causes. But in that process, your logical approach may win you over the other people who are listening.

Find someone you can look up to. An icon, an advocate can really help you find perspective for yourself in the years you are shaping your voice.

Reach out to communities that offer a safe circle to grow and modify your views, if need be. Their trustworthy environment may instil in you the courage to differentiate yourself from your peers and most importantly, find acceptance for it.