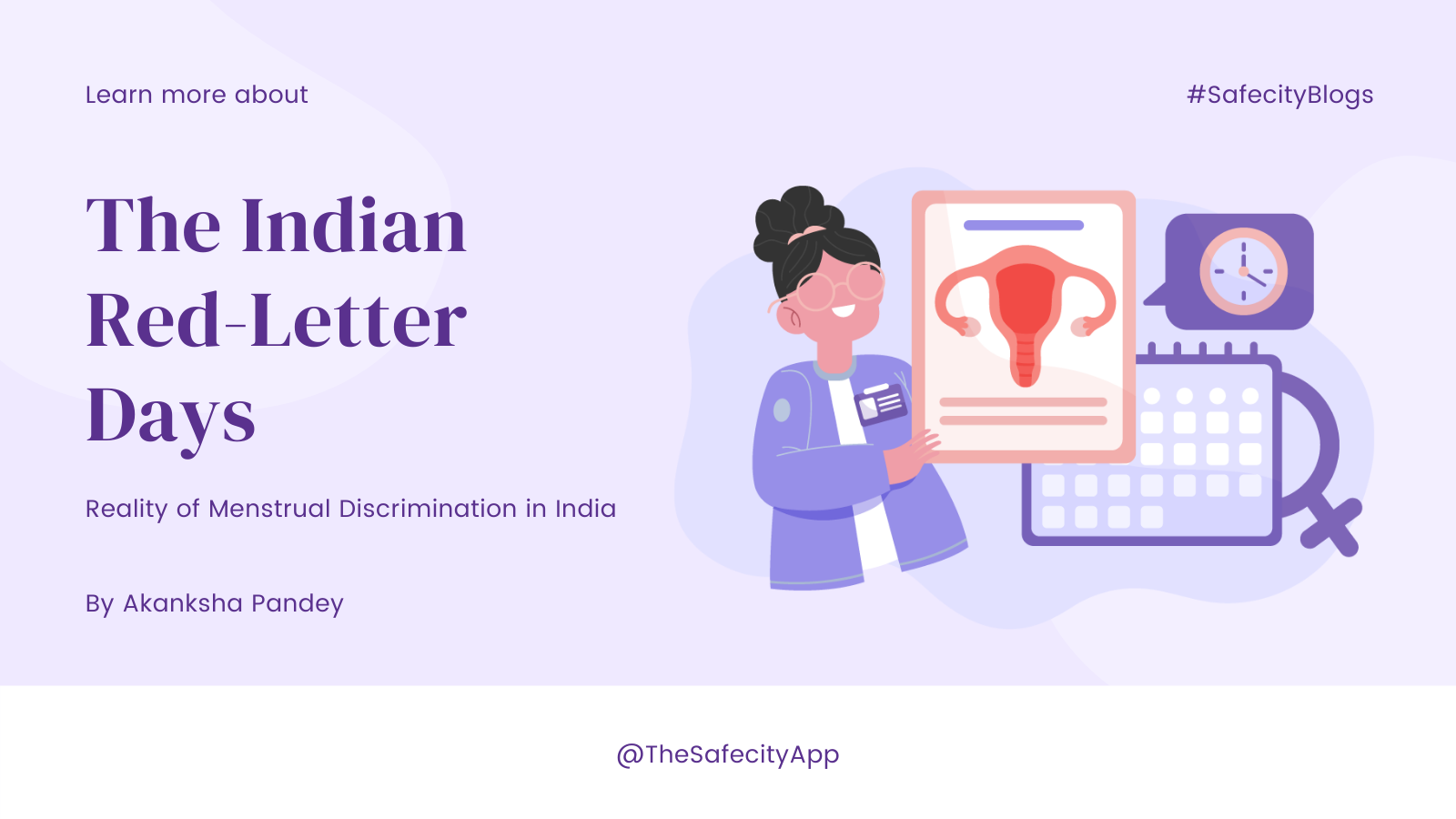 Menstruation, while the dictionary defines it as, “a cyclical discharging of blood secretions, and tissue debris from the uterus that recurs in non-pregnant breeding-age primate females”, its societal definition has little to do with these complex jargons. Here it is a matter to be whispered about in hushed tones, wrapped in black polybags, apartheid-like segregation, unprecedented restrictions, assault on personal dignity and mental breakdown.

Unfortunately, all of this is further worsened by a sheer lack of sufficient knowledge pertaining to the subject evident among pre-menstruating folks. This ignorance stems from a host of reasons, the social stigma associated with periods and inadequate space accorded to the subject in the school curriculum being the predominant ones. According to a UNICEF report, 71% of adolescent girls in India remain unaware of menstruation till menarche. Understandably, their initial response to this apparently intimidating phenomenon is one of fear, disgust and self-abuse. According to a survey conducted in Jaipur and published in the Journal of Family Welfare, schoolgirls reported their dominant feelings to be shock (25%), fear (30%), anxiety (69%), guilt (22%) and frustration (22%). A number of them mistakenly presumed it as the outset of a fatal disease. Interestingly, as reported by The Journal Pediatrics, the expected age of attaining puberty among girls has declined by an average of 3 months per decade over the last 40 years. This calls for an urgent need to apprise pre-menstruating folks of menstruation in their pre-teens itself in order to avert any future instances of hysteria. However, the HRD Ministry is yet to respond satisfactorily to the urgency. The subject of adolescence and its vagaries isn’t touched upon until class 8th in the science curriculum designed by the National Council for Education, Research and Training. Keeping in account that a notable proportion of menstruators begin menstruating before the age of 13, such laxity by governmental bodies could be potentially hazardous to their menstrual and sexual health.

This unfamiliarity among young menstruators is also anchored in the reluctance shown by older women in acquainting them to this crucial process at an early age. A majority of these women themselves remain psychologically conditioned to view their periods through a moral spectacle from their younger days, hence they unabashedly perpetuate the associated taboos. This inheritance of shame, as it is aptly called, has grave consequences for the menstruators’ self-confidence and often degenerates into self-hate.

Additionally, contemporary conversations concerning menstruation are invariably crippled by a gender binary approach leading to the unfortunate exclusion of transgender, non-binary and gender non-conforming folks from the prevailing discourse. Mainstream perception often popularized by cinematic depictions and commercial advertisements, portray monthlies as exclusively cis-women experiences. This is exactly the outcome when sex assigned at birth is conflated with gender, which is essentially a social construct that rigidly defines the societal roles and personal attributes of either sex but may not find universal resonance. According to a pan-India survey conducted jointly by Water Supply and Sanitation Collaborative Council and Youth Ki Aawaz, a whopping 47% of respondents deemed menstruation to be a women’s issue while 31% didn’t know that transmen and non-binary people menstruate. Besides, there aren’t any grassroots provisions ensuring a dignified menstrual experience for these vulnerable groups. Public toilets hardly have gender-neutral cubicles, making an exercise as basic as changing pads a nightmare. Clearly, our society is yet to establish peace with the fact that not all menstruators are cis-women.

For intellectually and physically disabled menstruators, periods are nothing but a periodic reminder of how utterly indifferent and discriminatory the social institutions in our country can be. The lack of a disabled-friendly toilet infrastructure makes their experience all the more painful. According to a research published in the Australian Prescriber, undertaken by Director Jane Tracy, Associate Professor Sonia Grover and Sandra Macgibbon entitled, “Menstrual Issues for Women with Intellectual Disabilities”, menstruators with developmental disabilities may experience menstrual problems slightly differently, with their level of understanding posing an impediment in managing their menses. Hence, many parents deem it prudent to keep their specially-abled daughters under constant surveillance dreading the threat of sexual exploitation since the child remains cognitively ill-equipped to differentiate between good and bad touch. Thus, effectively limiting their exposure to menstrual education. Also, most of the governmentally sponsored period toolkits rarely have instructions inscribed in braille script, making it difficult for visually impaired menstruators to acquire crucial healthcare insights. The intersectionality of being a specially-abled menstruator stunts their overall personal progress.

Period poverty (inability to access menstrual products primarily due to financial constraints) responsible for poor menstrual hygiene management constitutes another of the long litany of problems confronted by Indian menstruators during their periods. Around 40% of the government school toilets surveyed by the Comptroller and Auditor General of India (CAG) were discovered to be non-existent, partially constructed, or unused while 27% of the schools lacked separate toilets for girls. According to a study undertaken by AC Nielsen entitled, “Sanitary Protection: Every Woman’s Health Right”, 70%  of Indian women cited financial impotency for not being able to afford sanitary napkins. With the covid-19 pandemic pushing nearly 230 million Indians into poverty, this inequity has further deteriorated, a fact vindicated by a survey conducted in Bihar, Uttar Pradesh and Rajasthan by the NGO, Population Foundation of India, which found that more than half of the woman surveyed lacked access to sanitary pads during the lockdown. Inaccessibility to such basic sanitary amenities instils a perennial sense of foreboding (that their blood-stained garments will end up causing intense public humiliation) among menstruators who are forced to resort to dirty rags to stop the leakage which increases their vulnerability to serious urogenital diseases such as urinary tract infection(UTI), bacterial vaginosis, white and green discharge among others. This also discourages many of them from engaging in sporty ventures and is substantially responsible for the high dropout rates seen among adolescent girls in India. In 2018-19 alone, as many as 5.12 lakh adolescent girls dropped out of schools as per a survey conducted under the Integrated Child Development Services (ICDS) scheme inaugurated by the Union ministry of women and child development.

While this volley of data might come across as depressing, numerous laudable initiatives by the Central government, such as the distribution of sanitary pads at one rupee each in Janaushadhi Kendras, earmarking Rs. 12,000 crore to ensure universal access to sanitary pads by working in synergy with big business enterprises, selling biodegradable pads under the Suvidha brand and the Swachchha Bharat-Swachchha Vidyalaya campaign to ensure the availability of WASH facilities in every Indian school are worth mentioning. Most of these, however, are concerned exclusively with maximizing the availability of sanitary ware which might not suffice in the long run. Unless the irrational behavioural and social conventions of the masses still shackled by superstitious beliefs and taboos are addressed adequately, we will cease to experience any noteworthy advancement in the province of menstrual health management. This could be achieved by the rapid installation of pad vending machines, enlarging the pool of influencers – teachers, community health workers to spread the word by organizing camps among especially marginalized communities at a faster pace, organizing gender-inclusive seminars for sensitizing cis-men who are otherwise left largely ignorant to the woes of menstruators and contribute in furthering period prejudices, acknowledgement of menstrual rights by both public and private sector enterprises, evolving innovative methods to dispose off the menstrual waste in an environmentally sustainable manner, constructing an inclusive movement addressing all potential menstruators (transmen, specially-abled and street dwelling adolescent girls and child labourers) and destroying red-tapism that impedes the effective implementation of policies on the ground. Until the aforementioned loopholes are addressed, even discarding menstrual waste (ideally expected to be done secretively) will continue to remain like a covert spy mission.

3 comments on “The Indian Red-Letter Days”

After a very long time i have read such an amazing article,
am really happy to see this!

After months i have read such interesting article.
keep sharing more blogs like this
Thank you!!!

After So long i have seen such an amazing article
am really glad that i came across this article.