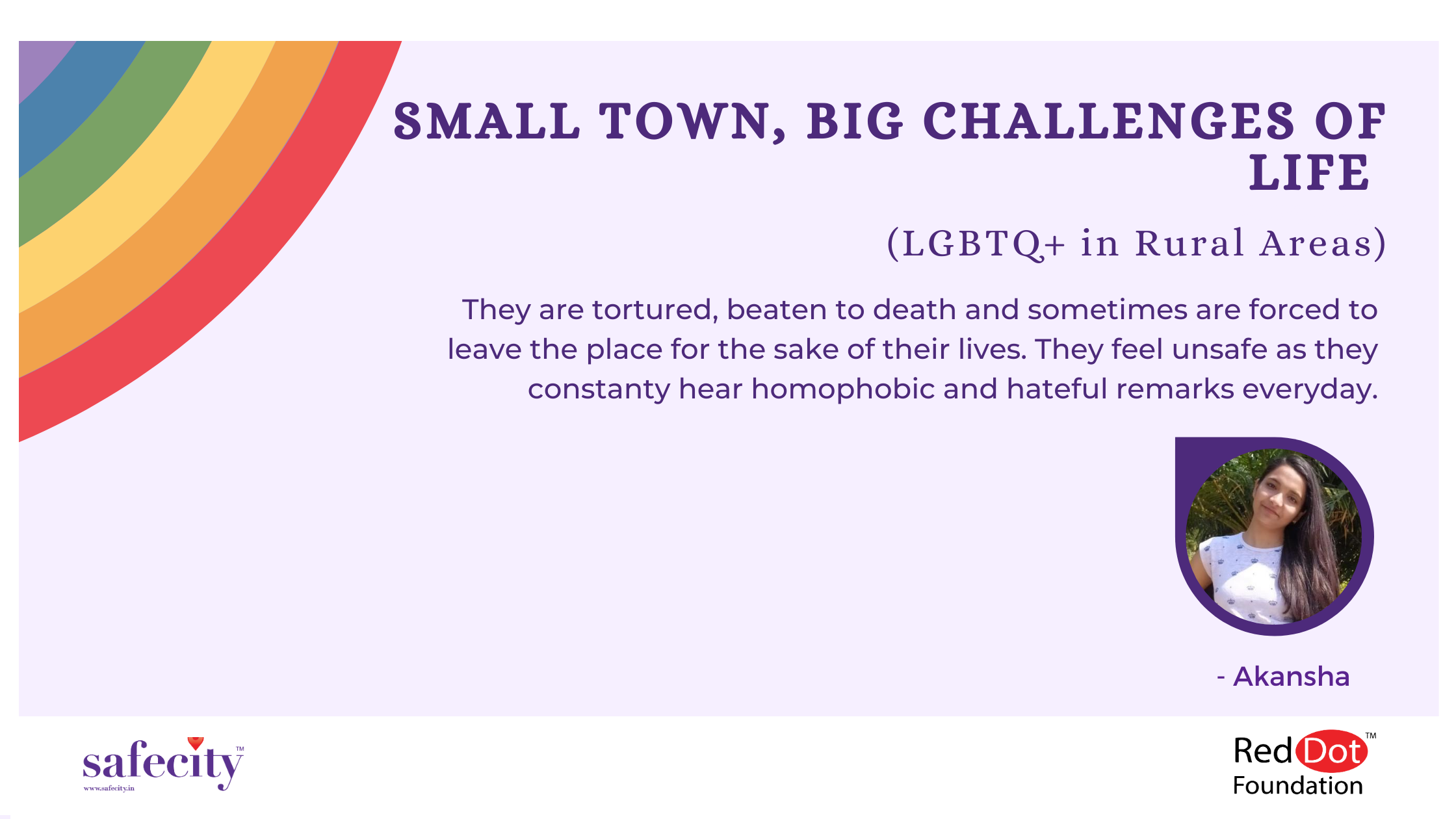 Throughout history, urban or suburban areas are considered to be more developed and modern as compared to rural ones. Even after having a bigger population of educated people, the LGBTQ+ community faces problems in cities and are still fighting for their basic rights and respect, whereas, in rural areas, the situation is even worse as people there are comparatively less educated and more aggressive towards the protection of their age old values.

People have been making the lives of the LGBTQ+ community a nightmare in the name of protecting “traditional moral standards”. The queer individuals living in rural areas experience antagonism, oppression, and violence. Individuals belonging to the LGBTQ+ community are forcefully sent to “conversion centers” or treated so brutally
and are advised to “fear God” as their non-traditional beliefs and practices are serious violence and also an intolerable damage to “Dharma” and “Prakriti”. They are tortured, beaten to death and sometimes are forced to leave the place for the sake of their lives. They feel unsafe as they constantly hear homophobic and hateful remarks
everyday. Most of the individuals choose to commit suicide as they are unable to suffer such brutality. They face physical harassment/assault and sexual violence, because of who they are. The rural people are so bound to believing in their myths and superstitions that they think a person who belongs to the LGBTQ+ community is not normal and hence, not fit to live within the normal society.

According to reports, top sources of bullying are schools/colleges, peers, and the internet. Rural LGBTQ+ students reportedly feel unsafe in specific school spaces, most commonly, the washrooms. Transgender students have been prevented from using their name or pronoun of their choice, are required to use washrooms that don’t ally with their gender identity. Only a few of the rural students reported having an LGBTQ+ inclusive curriculum. Lack of awareness results in a more challenging environment for the LGBTQ+ community as their fellow mates have no idea about what changes they are going through and that is made worse by bullying or fearing them. These things majorly affect students&#39; education as this kind of behaviour leads to absenteeism or dropouts from school.

It is an undeniable fact that all these things are new for a society with less knowledge and awareness, but it is obviously not impossible for them to learn. Some representatives of LGBTQ+ community are trying to rectify this problem via short street plays, poems, drama and parades. These attempts play a great role in making people understand that “LGBTQ+ community is not something that’s from out of the world, it is what it is, sexuality is not a choice it is what you are born with and what you are”. It is of utmost importance to “Believe. Support. And Validate.” As we work or radical self-acceptance and self-joy, we must also uplift all other individuals in our community. Strength comes from connection; let’s just stop making a mould and trying to fit everyone into it.