Safecity is celebrating the journey of people who have emerged as leaders as our campaigns progressed in their communities through our blog series “Safecity Emerging Leaders“. Read the inspiring stories of these individuals who are passionate about making their neighborhoods safer with Safecity and have taken action in their own special ways.

Arun was told not to worry about what girls and women face, he was told that it is their destiny to obey men, he was told that the society sees women differently and that it is the right way, he was told to enjoy the freedom boys have. Arun grew up wondering if violence can ever be justified, if violence can ever be right, and if anyone should be tolerating violence, he wondered how patriarchy managed to get away all these years, and how is it that the greatest burden has been thrust on women for safety and equal rights when clearly it’s about human rights, it’s an issue that belongs to us all and hence needs for us all to step up. Arun is 18 and lives in Sanjay Camp, New Delhi. He is appearing for his 12th Board exams and we wish him luck that he may shine through!

Safecity and Action India were looking at effective ways of bringing boys and girls together to talk about gender and issues that affect them as part of their joint campaign for safe spaces in Sanjay Camp (more about it here), and that’s how we met Arun. Arun attended Safecity’s session on understanding what is sexual violence and since then kept coming back to our weekly meetings with other girls and boys. He noticed the boys were far fewer than the girls and started assisting us in mobilizing his friends and their friends. Arun actively participated in photo documenting his neighborhood and mapping hotspots in his area through our weekly sprawls and walks around the neighborhood, it was his first time at seeing his neighborhood with a purpose. 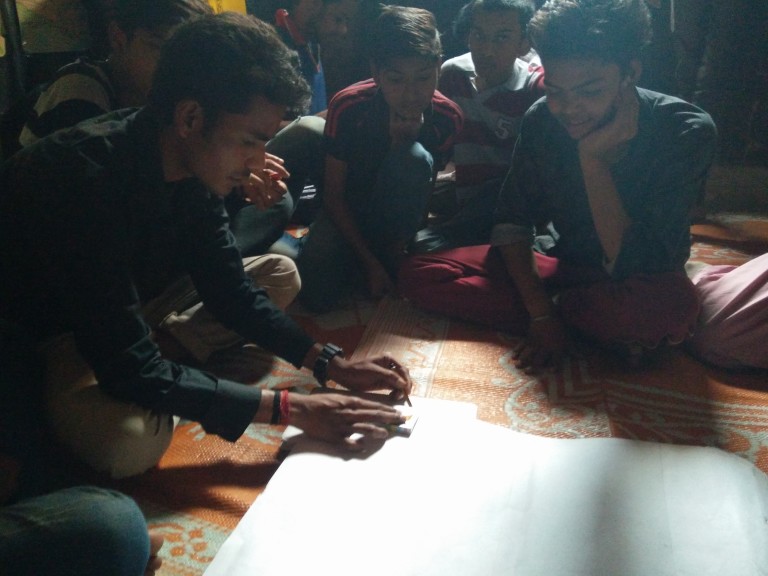 In Arun, we see hope in how people can participate in bringing change, we see examples of people who care, we see the dedication to fight norms that abet violence, we see inspiration for so many others to follow along. Arun is also a wonderful artist who spends his free time painting. Inspired by the impact of the toilet complex intervention in his neighborhood which was designed by the girls he has grown up with (you can read about it here), Arun is now working with a group of boys to design murals for an arterial road that is accessed by most people of Sanjay Camp. They spend afternoons creating sketches, brainstorming on ideas, speaking to people around them to figure what best to convey through those murals. Arun believes in the power of art and he is confident that the message will spread wide and across through these murals, he will be able to speak to the people he has lived around through these and he is hopeful that so many boys who are now participating with him will walk the road for a safer and equal society.