Our Founder & CEO, Elsa D’Silva, was recently in Argentina for the Global Diplomacy Lab (GDL) which is an initiative of the German Foreign Office and sponsored by the BMW Foundation amongst others. As a Responsible Leader of the BMW Foundation and an awardee of the UNAOC/BMW Foundation’s Intercultural Innovation Award, ElsaMarie represented Red Dot Foundation at this important gathering in Buenos Aires, Argentina on 21-24 June. The theme was Creating Cutting-edge Regional Networks to prevent Mass Atrocities and Genocide.

It was interesting to understand the current scenario where Latin America and Africa both have regional networks for mass atrocity and genocide prevention but operate in a very different way from each other. Not only are they working with governments but also with civil society to create early warning systems to prevent such extreme violence but they are investing in peace building measures to reduce and address conflict. This Lab was one of two part series where ideas are incubated and later in the year, the impact of the action will be measured. The Lab constituted of understanding the current challenges of the 2 networks and then observing various initiative on the ground by government, NGOs and other institutions to build peace, reduce conflict and revitalise communities. In particular, some of the efforts by the Argentine government to address the violence of the 1970s and bring transitional justice to fruition is commendable. The visit to ESMA left us all shaken as we could see what human beings could do to each other. The visit and the efforts of the Lab are relevant in today’s context where violence is on the rise and peace is taking a beating daily. 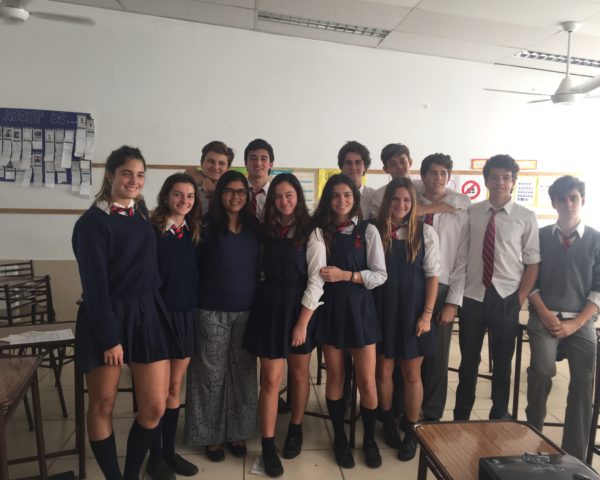 As part of the spirit of co-creation amongst the GDL members, ElsaMarie also hosted 2 peer to peer training sessions on using Twitter for promoting your cause effectively. It was well received and participants immediately implemented the skills they received.
At Red Dot Foundation, our work focuses on reducing the inequalities amongst gender and alleviating the violence based on it. Do get in touch with us, should you wish to host a workshop on Understanding how peace is measured and how you and your organisation can be Peace Builders.
———
In addition, ElsaMarie met with several groups to share Safecity’s work on eradicating gender based violence in public spaces using crowd maps and community engagement. She first met with the Vital Voices Argentina Chapter head Gabriela Terminielli who in turn introduced her to Sofia Quilici who is a mentee of the Vital Voice mentoring program, a journalist and works with the Ministry of Justice in the Gender Based Violence Prevention department. In the last few years, cases of GBV have risen to a great extent in Argentina and every day a woman loses her life to “femicide”. This has given rise to a national campaign called Ni Una Menos or Not one more life.
During the GDL, one of the visits was to an art gallery where feminist artist Fernanda Laguna’s work was on display including the giant banner that was part of the Ni Una Menos march. 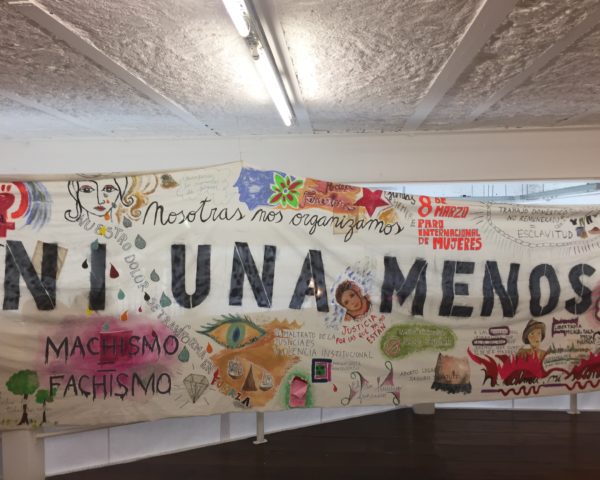 In Rosario, which is north of Buenos Aires, ElsaMarie met with her Vital Voices peer Luz Amuchastegui who is with the El DeSafio Foundation that does incredible work on ending poverty and empowering youth through sport. She attended their event on improving Urban Mobility in the city where they invited all citizens of Rosario to co-create and re-imagine how public spaces could be used. Several innovative ideas were generated and it was fascinating to see how involved the citizens and local government were at the event. She spent quality time with Luz and co-founder Mario Raimondi on common challenges as social entrepreneurs, creating campaigns to address vital social issues and managing young teams. 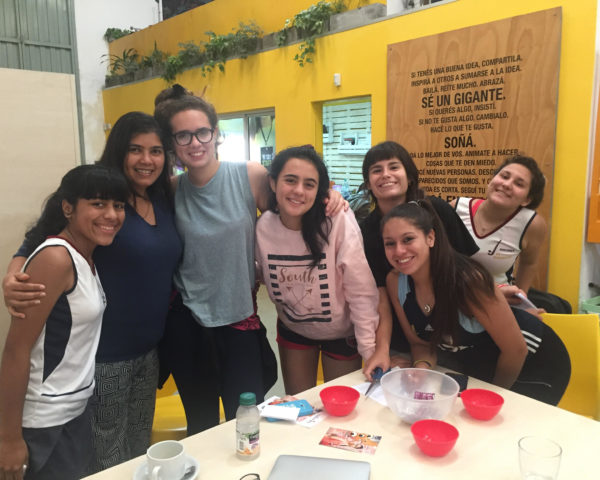 ElsaMarie also had the opportunity to visit an upscale high school, Colegio San Bartolome where she discussed Safecity’s work and how every person could be an agent of change. She encouraged the 12 students and their class teacher to join in a local campaign with ElDeSafio to make their city safer, inclusive and equally accessible to all. She was witness to ElDeSafio’s work and spoke to two batches of young girls between the ages of 12 – 16 years on the challenges they faced whilst traversing the city, the kinds of sexual violence and the redressal mechanisms available to them.
She also met with local council leaders Seba Chale and Eugenia Schmuck who are interested in the Safecity crowd map for Rosario. We hope to tie up all the logistic details to bring our innovation to this lovely city through our friends and partners El DeSafio Foundation.