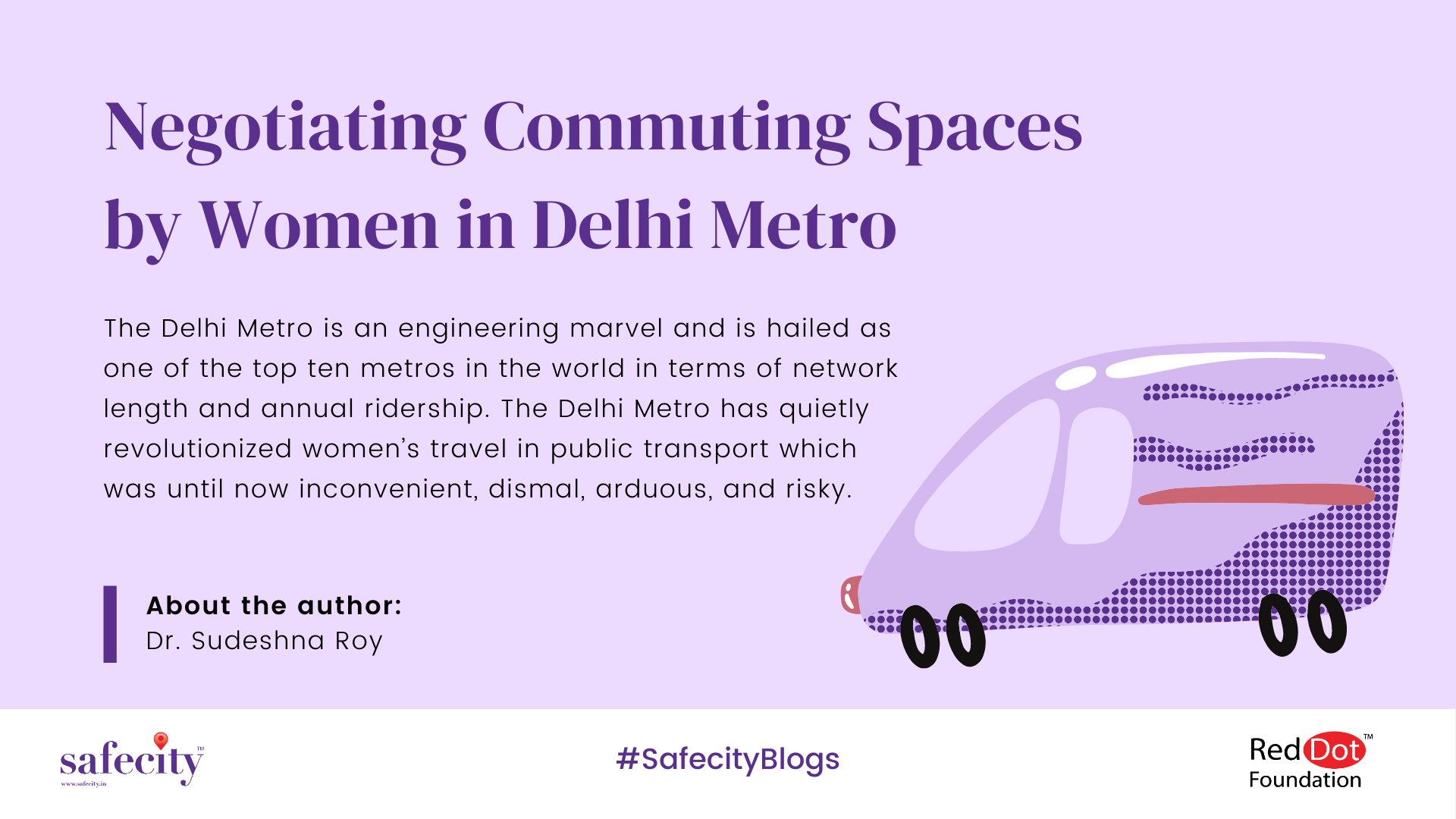 Inclusive Urbanism, My opinion, Safecity Blogs
Comments are off for this post

The Delhi Metro is an engineering marvel and is hailed as one of the top ten metros in the world in terms of network length and annual ridership. It is the most crucial addition to the city’s transportation infrastructure which has not only transformed how people travel but has also influenced in creating a dynamic socio-cultural public space for the burgeoning megalopolis. It has inculcated an image of efficiency, orderliness and imbibed a sense of ‘sophistication’ (Sadana, 2010) into Delhi; which has been a melting pot of culture; an amalgamation of deep historical roots, and of modern techno-centric urbanism. The positive image of the metro propagated by the Delhi Metro Railway Corporation (DMRC) has garnered public support and attracted patronage, especially from the women. The Delhi Metro has quietly revolutionized women’s travel in public transport which was until now inconvenient, dismal, arduous, and risky.

Additionally, the metro railways have instilled dynamism in the cultural milieu of the Delhi-NCR urban ecosystem and have evolved as a determining character in the cityscape. With the gradual expansion of its services into the interiors of NCR, the Delhi Metro has aided in linking women residing in economically potential neighborhoods to the commercial city-core. Metro has enormously eased connectivity and accentuated mobility of women from across NCR who commute relatively safely for work, education, and leisure. The Delhi Metro system has slowly blended the narrative of the urban morphology towards social and gender inclusivity equipped by smart technology. It has not only altered urban mobility but has primarily catered to the needs of women including the elderly and the disabled. It has further steered public social behavioral norms and generated vitality into the fabric of the social life of the city.

The striking presence of a separate women’s-only coach at the front end of the train; marked by a distinctive pink colour is perceived as a safe space by the women commuters. Any presence of male passengers in the ladies’ compartment is strictly monitored through CCTV surveillance by CISF personnel and attracts immediate tracking, deboarding, and penalty from the trespasser. Women’s safety is greatly upheld within the metro premises and there has been an observable change in the behavioural pattern especially among the male commuters. There seems to be an invisible code of conduct and commuting etiquette that passengers mysteriously abide by; queueing up for security check, waiting for a vacant seat or vacating a seat for pregnant and elderly women, restraining from spitting and littering within the premises, and patiently giving passage to the people who deboard the train.

Given the vast geographical expanse of Delhi-NCR, and the prevalence of a relatively higher crime rate, the operations of metro rail services since 2002 have increased women’s ridership in public transport as it is viewed as a secured and convenient mode of travel. Traveling in a women’s only compartment has become a ‘phenomenon’ in Delhi (Tara, 2011), given the fact that women’s accessibility to a city is restricted owing to lack of safety, male company, and agency.

Consequently, the metro has eased women’s commute, facilitating greater accessibility and participation, to the available economic and socio-cultural opportunities, under the comfort of air-conditioning in a mode which is not only faster and affordable but which operates with clockwork precision and punctuality, unlike other conventional modes. The comfortable travel and ample space mean that travel time has been productively used by women commuters. The multitude of activities such as reading, working on laptops, watching movies on smartphones, students studying, knitting, self-grooming, and sometimes even peeling vegetables and other chores however amusing, has been witnessed within women’s only compartments. Metro premises provide a dynamic space for interaction; for leisurely hang-out and quick business exchanges. The women’s coach literally transforms into a shared community space and has given them a chance to stay out late. Access to public space is vital in establishing control and maneuvering gendered space. Metro has carved out a niche in terms of promoting safe and liberating travel for women especially at night, harnessing commuter discipline, cleanliness, and sensitivity among the users, and affecting work-residential choices and mobility-related decisions among women.

Moreover, mass travel has helped to break down the social rigidities and caste-class prejudices to some extent. It has shown how social identities are transformed by the appropriate spatial setting; in this case, instead of here metro travel space, which acts as a ‘leveller’ (Desai 2007). The Delhi Metro has enabled rendering social harmony by smoothly tying up the diversity and complexity of its inhabitants yet keeping the essence of the city intact (Sadana 2010). The Delhi Metro thus stands as a quintessential example of how gendered segregation of space and anonymity in metro travel has facilitated in negotiating a greater sense of wellbeing for the women and given them a perceived notion of autonomy along with scope for upward socio-economic mobility.

About the author: Sudeshna Roy

Dr. Sudeshna Roy is an independent research consultant with Sathi All For Partnerships and she writes on gender, urban, livelihood, and health issues.

Views expressed are that of the author.