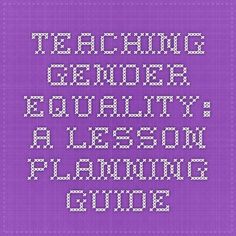 Gender Equality as Hidden Agenda in the English Language Classroom

One of the joys of being an English language teacher is the infinite number of opportunities available to invite issues of societal concern into classroom conversation. This article will focus on how critical enquiry around the theme of gender can be woven into sessions that are meant to teach language structures. The activities discussed below can be adapted for use with students in middle or high school, depending on the teacher’s intuitive under-standing of the students’ language proficiency and social context. They are meant to serve only as initial points of inspiration for how language teaching need not be a mechanical exercise; in fact, it can be in robust engagement with social realities and challenges. The creativity of the individual teacher will undoubtedly bring alive many more ideas.

The activities described here grew out of a response to ‘Integration of Gender Studies in the School Curriculum’, a presentation made by Suman Kumar, Principal, Bluebells School International, Delhi at a three-day conference called ‘Effective Intervention and Communication Strategies to Counter Violence Against Women’ held in Delhi, and organized by Women in Security, Conflict Management and Peace (WISCOMP), an initiative of the Foundation for Universal Responsibility of His Holiness the Dalai Lama.

Kumar spoke at length about the ‘Gender Bender’ curriculum introduced in the school with the objective of reducing gender based prejudice and discrimination. On assessing the effectiveness of this curriculum, she discovered that girls at school showed a significant increase in self-esteem and confidence but there was hardly any perceptible shift in the boys’ attitudes. She was not able to fathom the reason behind this gap.

While thinking about how to design and facilitate gender-themed sessions that would also engage boys at a deeper level, I came across ‘Multiple Masculinities and the Schooling of Boys,’ an article by Wesley D. Imms in Volume 25 No. 2 of the Canadian Journal of Education published in 2000. Though it would be presumptuous to comment on Kumar’s curriculum without studying it at the planning and execution stages, this article offers some insights that would be of value to any teacher keen on approaching gender-related questions and issues in their classroom.

Imms writes, “Their (boys’) defensiveness when faced with gender-equality programmes was attributed to their ‘fragile’ masculinity, poor self-esteem, and inability to construct relation-ships not based on power. We need to recognize that these attempts operate within a limiting structure – the assumption that all boys exhibit and enact a single homophobic, sexist, hegemonic masculinity, that they are young patriarchs in the making. There is little acknowledgement of males who do not fit this mould…”

Keeping this view in mind, the following activities attempts to break away from the misguided notion that gender equality is about making boys more like girls, and girls more like boys. In fact, gender equality is aimed at treating everyone equally, regardless of their gender. It seeks to challenge the very idea that certain attributes, skills, interests, values and attitudes are inherently present in people because of the genitals they were born with. Not all boys think, feel, and act in the same way. The same can be said of girls.

Imms emphasizes the need to “broaden cur-rent perceptions of masculinity to recognize the range of masculinities represented in schools,” “to strengthen the elements of curriculum that can help boys reject hegemony,” “to acknowledge a powerful force within masculinity working against oppression and domination,” and to understand “the debilitating – even marginalizing effects on boys of diatribes that treat them as somehow incurably toxic.”

The activities presented below make room for multiple masculinities and femininities, with-]out using either of those terms so that one may move from semantic squabbles into actualizing at least an elementary exploration of gender in the English language classroom be-fore one can begin to talk about lesbian, gay, bisexual, transgender, queer, inter-sex, asexual, and gender non-binary identities.

A language structure that is commonly taught by teachers of English is the conditional form that uses ‘if’. It is used to predict what could/ would happen as an outcome of a certain action, or state what usually happens when certain conditions are met. Here are a few examples:

If wishes were horses, beggars would ride.

The cricket match will be cancelled if it rains today.

If you go to bed early, you wake up fresh as a flower.

If you had informed me about your illness, I would have suggested meeting another day.

I will not entertain you if you speak rudely to me once again.

After introducing students to this conditional form, the teacher is likely to give them a few practice exercises in order to firm up their newly acquired knowledge. This is where the hidden ‘gender’ agenda can step in. Students can be given a worksheet that requires them to complete the following statements.

Once the students finish writing, the teacher can elicit a few answers and explicitly check if the language structure has been understood by all. After this, the class can be divided into small groups, and each student encouraged to share the answers written. About five minutes into this activity, the teacher can lead a whole class discussion, inviting students to share their observations in response to the following questions:

The language teacher inevitably ends up teaching how to think critically in the process of working with students on their reading and writing skills. One of the key components of critical thinking is the ability to distinguish be-tween fact and opinion. Both have an important place in constructing arguments and rebuttals. Before one launches into an activity, it is important to define ‘fact’ and ‘opinion’ so that there is enough clarity about the distinction. Several definitions are available. Here is one adapted from Wikipedia.com.

A fact is something that has really occurred or is actually correct. The usual test for a statement of fact is verifiability-that is, whether it can be demonstrated to correspond to experience. It can be agreed to by the consensus of experts.

An opinion is a judgement, viewpoint, or statement that is not conclusive. It may deal with subjective matters in which there is no conclusive finding. It may be the result of a person’s perspective, understanding, particular feelings, beliefs, and desires.

Once this distinction has been understood, students can be asked to read the following statements carefully, and indicate against each one whether it is a fact or an opinion. They ought to mention the reason for their choice as well. Once they finish doing this, they can compare and discuss their answers in pairs or small groups.

When there is heated discussion in the class-room, and students are confused as to whether a statement is a fact or an opinion, encourage them to read the definitions once again, even challenge them if necessary to come up with their own definitions. What is the role of personal experience, science and religion in establishing a statement as fact? Can facts change over time, as research brings new evidence to light, followed by new conclusions? Can people’s freedoms and lives be in danger if they question the verifiability of what is considered a fact?

Facilitating classroom conversation around questions like these is not an easy task. The teacher needs to be mentally and emotionally prepared to handle unpleasant and uncomfortable ideas that might come up. Profound learning does require risk-taking; however, it is up to the teacher to discern how much risk is worth taking in their context.

These discussions will hopefully serve the purpose of gender sensitization not only for students but also the teacher. Though one might think of oneself as being open-minded, a number of hidden biases may get over-looked. During such interactions, there is an opportunity for them to come up and be con-fronted. It can be a deeply moving exercise of empathy in action for all involved so that the classroom itself can become a place to learn and practice gender equality and gender justice.

About the author: Chintan Girish Modi is a Mumbai-based writer, educator and re-searcher, who consults with the UNESCO Mahatma Gandhi Institute of Education for Peace and Sustainable Development. He has an M.Phil. in English Language Education, and is part of the UN Inter-Agency Network on Youth Development’s Working Group on Youth and Gender Equality.

This article was first published in Vol.32 Issue No.1, 2017 of the SPELT Journal brought out by the Society for Pakistan English Language Teachers. It has been reproduced here with the author’s permission, who can be contacted at chintangirishmodi@gmail.com