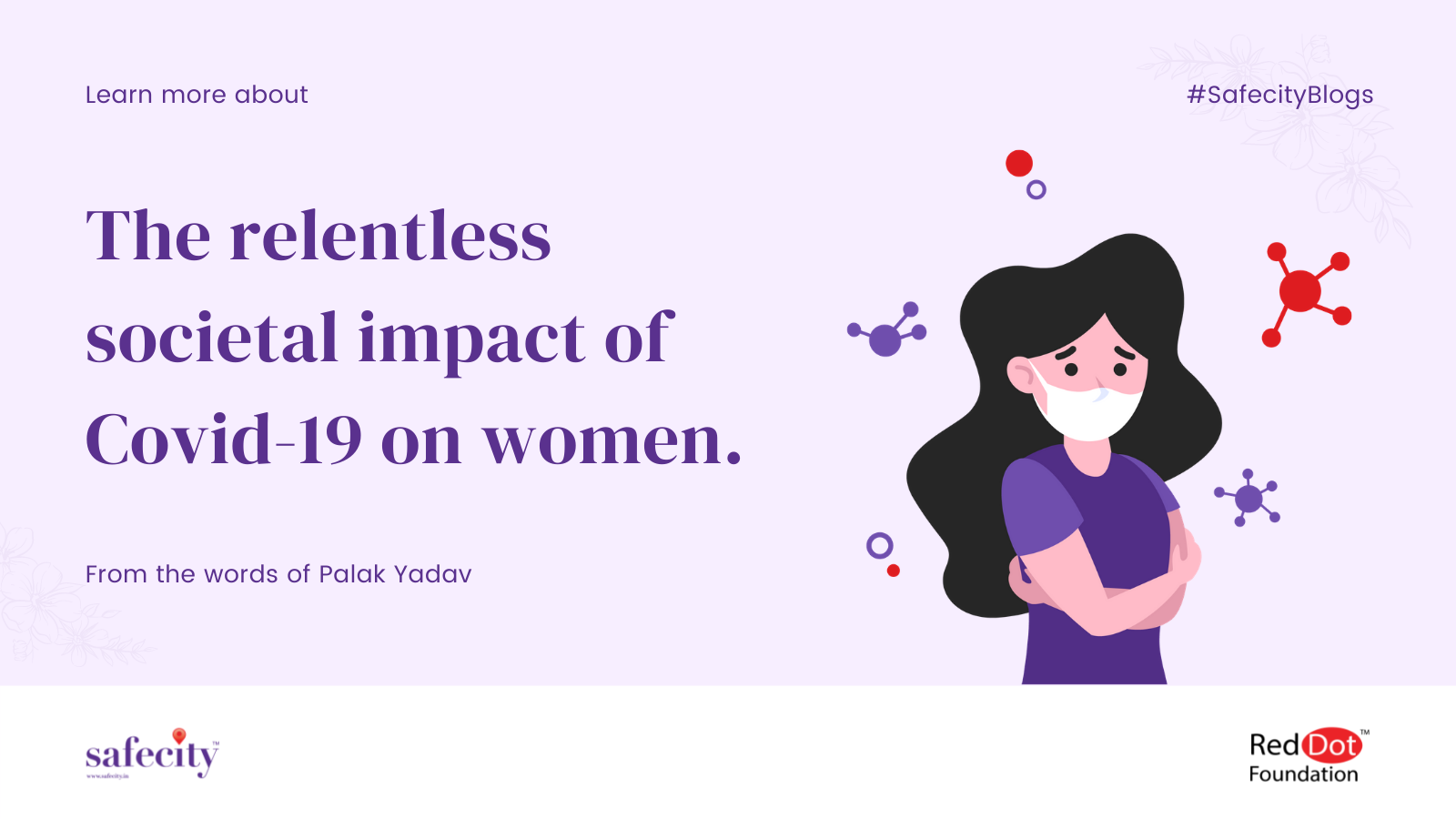 Covid 19, My opinion, Safecity Blogs
Comments are off for this post

The Covid-19 pandemic has affected everyone, especially with the second wave leading to the collapse of the health system. People have lost their family members and friends to it. In such times, when it’s hard to survive, the situation is even worse for women because of their care work. In our society, women have already been given the role of caretaker. They are ‘supposed to cook and clean for their families. As per data from the world bank, the female labor force participation rate in India in 2019 was only 21%.

As the pandemic took over, many people lost their livelihoods and women had to suffer even more because out of the 21% of working women, most are employed in the informal sector. With offices being shut, work from home is the only viable option left. And that is hardly an option for people who can not afford smartphones,  laptops, and/or a steady internet connection. The fifth National family health survey revealed that only 42.6 % of women have ever used the internet. And the figures drop even lower to 33.94% in rural  India. Women lag behind as they are perceived to be lacking in the technical know-how of a mobile phone and the added fact that talking on mobile phones for long durations is deemed  ‘inappropriate’ for women by the community.

Gender discrimination is so common in our country that males are always given priority over females when it comes to the use of resources. Even today, in rural India, parents do not send their girls to school. And with online mode as the only way of imparting education in this pandemic-affected world, even the girls who used to go to school are forced to discontinue their studies due to lack of resources.

In stereotypical Indian households’ women’s education and healthcare have never been given any priority. The infrastructure of the healthcare system in India was inefficient even before the spread of corona virus. Women with their weak social and economic status have always found healthcare inaccessible. In a study conducted by  AIIMS, Harvard University, Indian Statistical Institute, and the Prime  Minister’s economic advisory council, it was found that for every  1.69 male hospital visits, there was only one female visit. The maternal mortality rate as per the sample registration system report is still 130 on 100,000 live births which is further proof of how the healthcare system is skewed for women.

In their homes, loss of income and isolation has put women at a  higher risk of societal and domestic abuse. An article by The Hindu reported that domestic violence complaints were at a ten-year high during the Covid-19 lockdown in 2020. The rising complaints show how women aren’t even safe in the place they call their home. This is the scenario when data from the NFHS (round 3,2005) claims that about 75% of women never seek any sort of help for domestic violence.  It is disheartening to think of the actual number of women who are being subjected to it.

With the cultural attitude prevalent in our country, they are already reduced to a position of less respect in society. They are not educated enough to secure good jobs. Especially in rural India, girls are never taught to be independent, they are not encouraged or given any opportunities to learn and grow and are thus forced to be dependent on the males. The pandemic has claimed many lives. When male earning members of the household die most families are doomed to a life of destitution. Women of such households often end up doing menial jobs to support their families.

Right now, a vaccine being the only way to stay protected, is highly in demand. While the supply of doses is less, the supply of rumours on  WhatsApp is damaging and growing by the day, paving the way for people to develop myths regarding it. Ongoing research and the inability to conduct widespread testing during the ongoing pandemic has paved the way for inventing imaginary theories and unfounded beliefs. One of the most prominent myths is that women cannot get vaccinated when they are menstruating which doctors have claimed is completely false.

Many pregnant women suffering from Covid-19 have lost their lives in this dangerous second wave. The vaccines currently available in  India have not been tested on pregnant women as of yet. WHO  guidelines have stated that pregnant women affected by COVID-19  need more intensive care. Such women are showing restraint while taking medicines and getting CT scans as they may be harmful to their unborn babies and they are justified in their decisions.

To those who are thinking that home isolation isn’t as tough for women who are homemakers, try to understand that these circumstances are equally hard for them too. Those who are staying safe in their homes are handling the increased burden of unpaid caring work too. Mothers are not only handling household chores but also taking care of the members who are unwell. Their responsibilities have increased tenfold with adults working from home and children taking classes online.

Round the clock, the media is reporting the rising number of cases and the death toll. Social media platforms are flooded by the minute with messages requesting leads on hospital beds, oxygen cylinders,  and concentrators. In this tense environment, the stress and anxiety levels are skyrocketing with our mental health deteriorating further and further with each passing day. If other family members take up the responsibility and share the household chores then it will certainly reduce the burden on women. Spending time with them,  talking with them about the feelings and issues they face is a real help and makes them feel understood and cared about. In these times even the strongest women, the pillars of our household – mothers, sisters, and daughters are going through a very tough phase and they need our support even more than ever.

This was eye-opening educational!!! A must read!