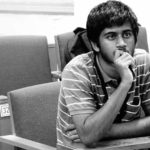 Yesterday accurately typified the entrenched patriarchy rooted in Indian society, the image of a self-proclaimed protector of Indian culture- the ‘Swamiji’ appearing on national television and shouting over and above three women on the panel, not letting them speak mixed in with the daily dose of sexism that the Swamis are used to giving- blaming women and their clothing as causes for the violence against them.

I realise that this may very well be an act of cheap publicity (this dawned on me after I got to know he recently got kicked out of the Big Boss house) because he was not finished with gaining television time and somewhere wanted to be the subject of discussion. But, watching different people opine over the past few days about the molestations that happened in Bangalore and other cities, I was left feeling disgusted and ashamed that there are a good many number of them in society who purport such absurdity. Two predominant arguments made by this group of people are two pronged- one that women should protect themselves and not go out alone late at night or drink alcohol or wear short clothes and the other being that such discussions and debates happen only when women are molested and not when men are subject to violence. I will address both these arguments underlying, prima facie, their absurdity and how to move away from such radical arguments.

The ‘Swamiji’ who made an appearance on India Today’s newsroom was the perfect representation of patriarchy- an aggressive, undaunted alpha male saying whatever came to his mind without any consequences. What was also evident is patriarchy’s absolute power to opinion when he repeatedly shut down the other panel members by continuously interrupting them when they were given their chance to speak. This was male supremacy at the first level in the so-called ‘debate’ on the channel. The problem starts when religious leaders like him (considering all other panel members were women) referring to their scriptures which apparently describes women as figments of god and divinity and that they must be respected as goddesses. Such an argument, prima facie, must be rejected as they themselves stink of patriarchy, describing women as divine figures is besides the point and completely antithetical to the rights offered to women as citizens and equal human beings. By describing them as such they are not helping women in anyway but only further confining them to their homes and households and purporting that they are in need of protection. The fact that you believe they should be protected as gods (especially in India) and that they should be at home always (as gods are in India) is patriarchal oppression of the feminine gender. Therefore, this argument is a very dangerous statement entrenched with patriarchy which should fall on deaf ears.

He then goes on to making many sexist statements with very little or no repercussions, one of them being, and I quote, “Women are like honeycombs and that they will attract bees.” He also kept referring to his scriptures saying that women until marriage should only go out with their brothers and fathers and they should not create circumstances or situations where they could be molested. He kept yelling ‘follow’ Indian culture and demanded an English news channel that the panel members speak Hindi and not be westernised. And let me be truthful, all of this is ridiculous but I could see his intention of gaining popularity as he expects people to be outraged and talk or write about him just like I am doing now. But the issue is too important and patriarchy is too oppressive an institution not to be abolished.

Not getting flustered, the widespread blaming of women who drink, go out late at night or party on new years’ or wear short clothes is extremely toxic and contagious and needs to be done away with. People must realize two things- one that they cannot police anyone when they themselves cannot respect another human being and second, being that people like Om Ji Maharaj must stop looking at women as goddeses and divine holy beings and start looking at them as equal citizens of the country having equal rights to move freely and the freedom to wear anything and live life however they want to as guaranteed rights and freedoms under the Constitution of India. Also, victim blaming (to use a gender neutral term before these mens’ rights activists attack me) happens only in cases of rape, molestation and assault because here is the problem no one says anything to a guy who is robbed questioning why he didn’t hide the money but rightly blame and prosecute the thief who stole the money. Why the same considerations can’t be shown towards acts of violence of against women and why they are always blamed and asked the questions. The answer is simple, and very well made by feminist scholars all over the world, patriarchy is so deeply entrenched in the minds of society that we have been wrongly taught to look at things through this very institution and Om Ji Maharaj was a perfect example of this.

Now, addressing the second argument for its very simplistic articulation by so-called mens’ rights activist Barkha Trehan on the Times Now channel on the 4th of January 2017. She just basically, on national television, very normatively and simplistically asked of the Indian citizenry, “Why don’t you talk about men, why does only women’s violence get so much media traction?” First, the argument or the thinking is not this simple. It is more complicated than that. Men’s rights and men’s oppression is not as rampant as that of violence against women and also very clearly a person against whom a criminal wrong is committed deserves justice and the perpetrator of such crimes, if convicted, should be subject to the appropriate punishment under the law. This is the simple understanding that Miss. Barkha Trehan does not get. She, then, speculatively and purely on heresy says there were no molestations in Bangalore on New Years’ eve and I agree that she or I cannot be a judge of that but the recent arrests and other instances of molestation do warrant a discussion and debate on the protection and safety of women. Therefore, this deliberate dilution of the women cause or the women revolution is completely unfounded and should be rejected and disregarded. Also, women oppression as Simone de Beauvoir puts it started with the advent of civilization and has gone on for hundreds of years without any meaningful conversation about it; it’s time to have those conversations and debates to do away with women violence and the institution of patriarchy.

But, more importantly the “Notallmen” hash tags and the immediate sense of absolvement that ‘not all men are like this’ and that it’s only a few of them why is there male bashing etcetera is completely absurd. Two responses, one that if you don’t support the fight that your fellow humans have undertaken then you are regressive and a threat to society, alternatively you don’t deserve a prize to establish your moral high ground just for the fact that you are a feminist or support women’s right to liberty and freedom. You remain a part of the problem if you crave a higher ground, as patriarchy is an institution built on supremacy and subordination. So we need to reject this tendency to bring out the question of men’s rights and issues and stop trying to make simplistic arguments like it’s only a few men in society who violate women.

Victim blaming only in cases where women at the receiving end of such violence becomes a very myopic and regressive representation of the Indian society and the quicker we get rid of such views, the better as these arguments are housed within institutions like religion which captures the imagination of the masses. Such views must be rejected and ridiculed and spaces of meaningful discussions must be created. Alternatively, the dilution of the womens’ cause must not be allowed to exist and conversations about the oppression of men and the violence they are subjected to are, arguments for an alternative paradigm and must be made independent of the fight against patriarchy not in close consonance of these discussions.