Around 20 girls, aged between 13 to 18 years, associated with Vacha Resource Center for Women and Girls recently undertook a campaign on sexual harassment in their basti (slum area) located in Sanjay Gandhi Nagar, Jogeswari (East). This campaign is in partnership with Safecity.

As a part of this joint effort, we conducted two workshops last week with the girls on mapping and survey of Sexual Harassment. Read the reports on the workshops below.

While discussing reasons why sexual harassment takes place, some of the answers that emerged included, for fun, to prove their mardangi (manliness) and to keep women in their place.

“Boys do sexual harassment to prove their manhood to each other. They challenge each other to “patao” girls”

Under the factors which encouraged harassment, they listed darkness, empty roads, as well as to much crowd.

We also conducted an exercise of listing safe and unsafe spaces in the basti. It was a sad but important fact that the list of unsafe spaces greatly outnumbered the safe spaces. Some unsafe spaces listed were the school, the toilet, the temple and the maidan.

Then finally we moved to the mapping exercise. After a discussion on mapping, and what to look out for during the exercise, 4 groups were made with 5 girls and each group was assigned to a different area in the basti (Azad Nagar, MHADA, Indira nagar and Jarna).

“We got stared at even when doing this mapping exercise.”

23 girls, ages 13 to 18 years attended the workshop on data collection and survey which took place on 25th September, 2015.

After completing some of the pending work from the previous workshop on mapping, the girls watched a short film made by Akshara Centre titled “Jor se bol! Stop sexual harassment!”(Shout aloud! A film on sexual harassment) followed by a discussion on harassment, the point of view of boys, consent and sexist double standards. The film is available on YouTube here.

Since the focus of this workshop was on surveying, this method of data collection was elaborated upon with details on different types of surveys, different types of questions such as open ended, multiple choice, yes/no questions and so on being mete out to the girls along with examples to simplify the concepts.

Then the focus was centred on the subject of the campaign, i.e. Sexual Harassment, and how surveys can be useful to gather data and fight against it. The girls spoke about collecting data from young girls in their community.

Towards the end, we browsed through the Safecity reporting form and asked the girls if there was anything else they thought should be included in the form. Working in 3 groups, the girls came up with 10 more questions to be added in the survey.

These are some of the questions the girls came up with:

Applying the knowledge gained in these two workshops, the girls are preparing the survey forms. Once the surveys are ready, the girls will be conducting interviews using these survey questions in their community over the next few weeks.

After the data collection and going through the survey responses, an appropriate intervention will be planned.

Here are some pictures from both the workshops on mapping and learning survey methods to collect data on sexual harassment: 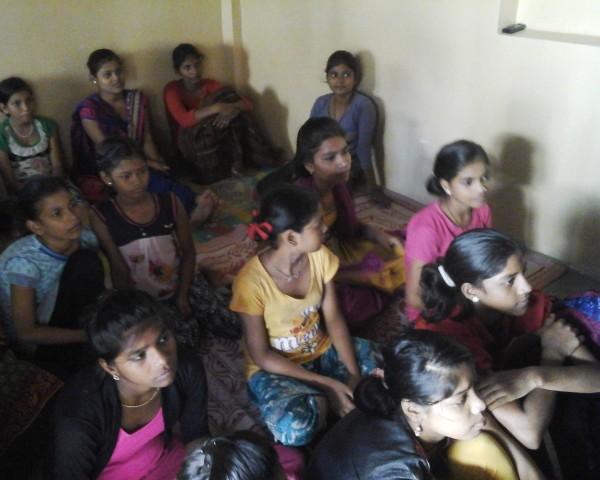