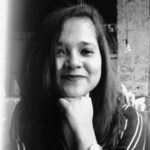 Titas Ghosh is the Program and Outreach Officer at Delhi. She is a Political Science graduate who completed her Masters in Women’s Studies from Tata Institute of Social Sciences, Mumbai. She gained experience working for a feminist organisation in Mumbai, as part of her Masters’ course-related fieldwork, that works with self-help groups in communities. Apart from this, she wrote her Masters dissertation on the lived experiences of women with breast cancer.

Visits to a community in Delhi

“My first visit to the community in Indira Nagar Enclave was on 16th August, 2018 along with the organisation- Nav Srishti. Nav Srishti works with a youth group here, which mostly consists of young men between the ages of 19 to 30, along with a couple of women of the same age group. This youth group regularly organizes workshops and meetings for the people of the community where they talk about issues related to children and gender. They also bring in experts from outside who help the children of the community, who are in school at the moment, with career counselling. Nav Srishti equips this youth group with ideas of social justice and creates awareness about harassment of women and children.

I had an hour long conversation with these young boys who talked about the work they do in the community, the people they work with, the kind of issues that the community faces and the work they do with Nav Srishti. In turn, I spoke about how Safecity addresses the issue of sexual violence in public spaces, particularly in regard to women’s access to and safety in public spaces. 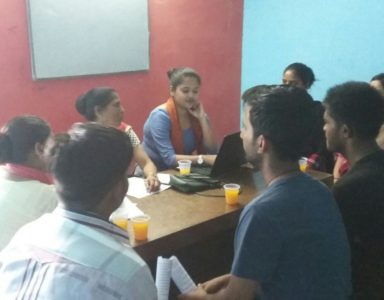 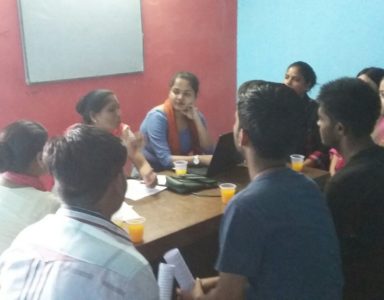 I went back to the community on the 21st of August, Monday to conduct a workshop. Three boys from the youth group were present, along with four other women aged between 21-45. I introduced the topic of the session as ‘Child Sexual Abuse’ by asking them their understanding about the issue. Most of them were acquainted with the issue but were only comfortable talking about the issue of child abuse in general – in the context of missing children, exploitation of children for labour, etc. However, when asked specifically about the sexual abuse of children, they all responded in the affirmative to knowing what it encompassed but were embarrassed to talk about it which goes on to show the culture of silence around the issue of sexual harassment. I went on to explain what child sexual abuse (CSA) is and what constitutes as sexual abuse of children. We talked about certain myths that are often associated with CSA and the people in the group, especially the women, shared instances of such myths. They seemed to respond better once the conversation on sexual abuse had been initiated. Of course, there was an understanding of gender in the binary, but we have to contextualize their understanding of gender on the basis of the social and cultural capital they have had access to. We also talked about the character traits that can help identify a perpetrator, and the warning signs of child sexual abuse on a child. Towards the end of the two hour long session, the group was more receptive to conversations on sex and sexual abuse.”