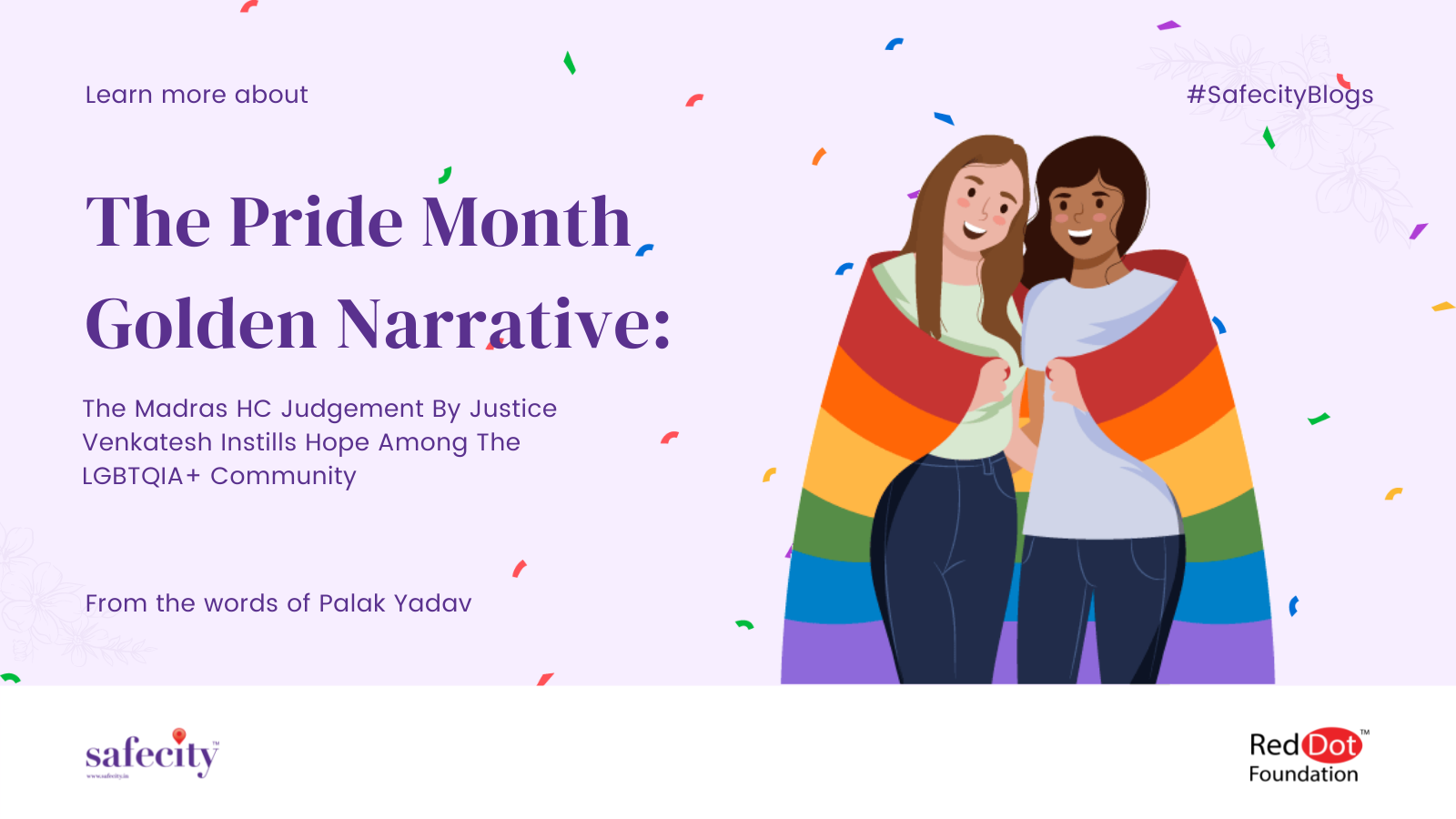 My opinion, Safecity, Safecity Blogs, Stride With Pride
Comments are off for this post

Sushama and Another v. Commissioner of Police and others is a case that is drawing our attention and that too for all the right reasons.

A briefing of the case:

The solicitors were a lesbian couple who fled from their respective  homes after their parents rejected their relationship. While the couple sought shelter with an NGO in Chennai, their parents filed missing complaints. After facing police interrogation, the couple felt that their safety and security might be threatened and they approached the court, looking for a course that can ensure their safety and no harassment from the police.

What is worth noting, in this case, is the way it was handled by the  judiciary. In a 107 page judgement, each and every course that the  case took is recorded precisely. Justice Anand Venkatesh who was  presiding over this case took it upon himself to do proper research to  improve his understanding. He didn’t want his preconceived notions to cloud his judgement. The court requested a counselling session with a specialist for both the lesbian couple and their parents.

When the counsellor presented a report on the proceedings of the  session, one of the things that stood out was that the parents of both  the petitioners were worried about their safety and security, and the  flak they would be facing from society due to their daughters’ sexual orientation.  Moreover, they insisted that they would rather prefer for their daughters to stay celibate than be in a same-sex relationship. Even after the counseling session, there was not much change in the parents’ belief systems.

Justice Venkatesh, before deciding how to go about this case, sought  counselling himself as he stated he was not ‘woke’ enough to  pronounce a judgement. The session with the specialist aided him in  dealing with his flawed notions. He knew that he had to tread  carefully as his decision will have an impact on the LGBTQIA+ community and the youth. The report from the session mentioned how heterosexuality is considered as the natural orientation, and adhering to anything other than that is outright abominable. After his counselling, he said that “I am the society, with all the misconceptions present. Now I’m working through it and engaging [in] the process of unlearning, so it is me who needs to convey this understanding to the rest of the society that stands where I once stood”. Not only that, but he also scheduled interaction with some people from the LGBTQIA+ community to comprehend the situation better by listening to their lived experiences. The interaction led to revealing the further grisly truths of our society. There were talks about conversion therapies and religious treatments that are believed to be the cures for homosexual and gender non-conforming people.

Ipsos, a global research firm, released its report on the 2021 LGBT+ Pride Global Survey conducted between April 23 and May 7, 2021. Using their global advisor platform, Ipsos interviewed 500 people in India. Based on the report, 3% of Indians are homosexual (including gays and lesbians), 9% are bisexual, 1% are pansexual and 2% are asexual. A total of 17% of respondents identify as not heterosexual (excluding ‘do not know’ and ‘prefer not to answer’).

However, despite the report not speaking for all of India, all of us deserve to have our rights recognized, all the more so if about 17% of the country’s population is affected.

Keeping all this in mind, Justice Venkatesh stated that he didn’t want the final outcome to be ‘half-baked’ and ‘ineffective’ and that’s why he had sought psycho-education. He understood that the people of this country consider homosexuality to be a mental disorder that can be treated with ‘conversion therapy’ and ‘medical intervention.’ In light of the fact that religious and societal norms are against the LGBTQIA+ community, the court issued guidelines to be followed when dealing with cases similar to this one. The court has suggested the conduction of certain sensitisation programmes and has directed the Ministry of Social Justice & Empowerment (MSJE) to enlist NGOs that have expertise in handling issues involving the LGBTQIA+ community so that anyone from the community can reach out to the organisations for safeguarding their rights. Since the Supreme court of India decriminalized homosexuality under Navtej Singh Johar v. Union of India and others, reported in 2018 (10)  SCC 1, this was another step forward in ensuring equality in the society.

The LGBTQIA+ community has welcomed the outcome of the case, and they are hopeful that they’ll receive more support from legal institutions in the coming future.

It  is disheartening to see that even in the 21st century, people still hold  onto age-old beliefs and norms and never critically think about them — whether they are reasonable or not. Many spend their lives remaining  closeted in fear of facing resentment from society and even from their  friends and family. The realization of how problematic the societal  norms are, comes when queer people not only have to deal with  hostility and harassment by their peers, teachers, and even colleagues  at jobs but when they report these incidents to the police, their  complaints aren’t heard and the police too jump in and harass them  as was evident in the above-mentioned case.

UNESCO report states  that in some countries, 85% of LGBT students experience  homophobic and transphobic violence in school, 45% of transgender students drop out. No wonder many people never come out and  remain closeted all their lives.

They are given the label of ‘not normal’, while normal is a term that is derived from ‘norm’ which makes us question whether what we consider normal is really normal. In essence, therefore, the concept of normality is subjective.

With such judgements coming in the Pride month itself, there is much foreseeability in changing the narrative, to look beyond what appears plain neutrality and preconceived notions that impinge upon the rights of all.

1 comment on “The Pride Month Golden Narrative: The Madras HC Judgement By Justice Venkatesh Instills Hope Among The LGBTQIA+ Community”

great Article
thank you for the sharing