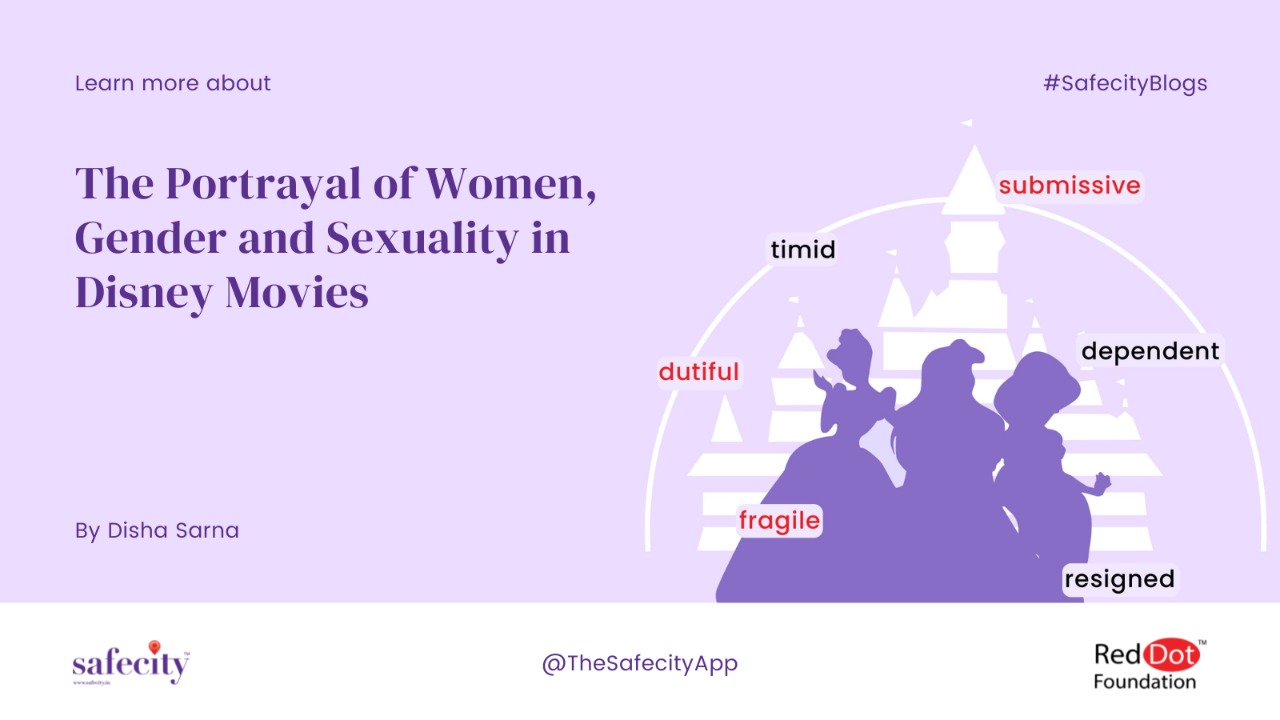 Disney is a staple in the media that children have devoured for a very long time. Children with access to television, phone or a storybook are very well-versed with the stories of Cinderella (1950), Sleeping Beauty (1959) and Snow White (1937). The fact Disney is such a big name in children’s media, combined with the fact that media has a very large impact on a child’s development, is why the content put out by Disney needs to be brought under examination. The social cognitive theory of gender development by Bandura postulates that repeated observation has a major influence on an individual’s understanding of the social world and gender development and this is even more pronounced during childhood as children learn through observation and imitation. With children spending around 7 hours each day in front of screens, according to researcher Victor C. Strasburger and colleagues, most of their understanding of the world comes from television which is why the media diet that children consume must be inclusive and accurate. This article is an attempt to examine popular Disney movies from the perspective of gender and sexuality.

The first thing that was interesting to note in a vast majority of Disney movies is their portrayal of women. Griffin and colleagues talk about how the movies that were released in the 1940s and 1950s often depicted femininity in a very physical sense with characters meeting the classical Eurocentric beauty standards, having slim waists and long blonde hair. The characters were very passive, rarely engaging in any kind of work and this can be seen in the classic movie Snow White and the Seven Dwarfs (1937) where Snow White leaves the castle without much resistance and when she finds the seven dwarfs, they work at the mine while Snow White is hiding from the evil queen. In recent times, this image of women has changed in Disney movies as we see powerful women characters like Elsa taking over. In Frozen (2013), one can see Elsa’s drastic transformation when she leaves her family castle. She sheds the gloves she has been forced to wear, has a drastic change in appearance with open flowy hair and a bejewelled gown replacing her own clothes. She builds her own magnificent castle of ice with a snow monster as a guard showing how something that she once considered her biggest weakness is now providing her with shelter and giving her strength. This is supposed to symbolise her journey towards a more self-actualised woman who is not scared of her power anymore.

These movies are unfortunately the exception and not the norm. A study done by Lara Descartes and her colleagues analysed Disney films over the years and this research concluded that gendered behaviours and stereotypes are still very prevalent in Disney productions, however, they have become more complex. The researchers argue that despite including a greater variety of gender roles, they have still retained the traditional approach and often include conflicting and contradictory depictions. An example would be The Little Mermaid (1989) where the princess wants to explore the sea and later on the completely different world that exists on land and find new places but at the same time, she is portrayed as a damsel in distress as her father rescues her from Ursula – a villainous sea witch – and is the one who transforms her into a human permanently. These dated notions with regard to gender roles could be stemming from the fact that till 2014, 96.28% of Disney’s directors were men according to IMDb and Frozen was the first Disney movie to be directed by a woman and perhaps this makes one question the intent behind the new feminist turn that Disney movies have taken. In their research, Martin Griffin and his colleagues argue that this feminist turn is, without a doubt, a response to the growing pressure that surrounds Disney to create more accurate characters and the fact that it had started to affect profits.

Talking about the notion of gender itself, Disney has always represented gender in a binary way, with no representation of the gender minorities. Karin Martin, in her research, notes that even with a transvestite character like Mulan from the movie Mulan (1998), the toys that are marketed are mainly feminine in nature, furthering the ambiguous stance that Disney has on queer characters. This is something that Disney has mastered, putting out highly marketed queer characters and then simply hinting at their sexuality or gender identity. Such queerbaiting can be seen in characters like Artie from Cruella (2021) who was advertised as a gay character during the promotional period but in the movie itself, Artie was simply queer-coded and his sexuality was very ambiguous. A similar instance of this has been observed in the promotional material of Beauty and the Beast (2017) where LeFou was marketed as Disney’s first openly gay character; however, talks about his sexuality were simply referenced and barely got any screen time. Another example Karin Martin cites would be that of Ursula, who was modelled after the famous drag queen Divine. Ursula is a cruel villain who is selfish and tries to take advantage of Ariel every step of the way, and the fact that this character was modelled after a queer icon makes the representation questionable. This quasi-representation creates an atmosphere of misunderstanding where children are often misled. Research, led by Bandura and followed by many other social psychologists, has consistently shown that children have formed an understanding of gender and gender roles through media and if Disney is not going to be inclusive, it will impact children directly as they will not have an accurate representation of how gender could be defined.

This brings about another very pertinent point – the “heteronormative” nature of Disney movies. Just like media plays a crucial role in gender development, it is a key aspect in the development of sexuality as well. In a study conducted by Litsa Renee Tanner and colleagues which analysed 26 Disney movies, it was found that while 61.5% of the families adopted an ‘alternative’ family structure, there were no same-gender parents. Most Disney films have an assumed romantic relationship between two opposite gender characters – even if these relationships are not crucial to the main plotline. A good example of this would be Anna and her relationship with Sven which barely contributed to the main plotline of Frozen. Furthermore, these movies perpetuate the idea that the “hetero-romantic” relationships are “magical” and “natural” – thus comes about the concept of the ‘one true kiss’. This breeds the culture of heteronormativity where children may assume they are heterosexual simply because it is all that they have been exposed to as not even a single Disney movie has openly portrayed a queer relationship. This can lead many children to have a skewed understanding of their own sexuality and creates a culture where any other sexualities besides heterosexuality are not even talked about. It also makes it seem like being anything besides heterosexual is wrong and taboo and can lead children who are not heterosexual to have low self-esteem, high narcissism, and inadequate self-expression, which can lead to psychological distress according to Gidi Rubenstein.

After going through the shortcomings of Disney movies and the lack of representation and inclusivity that persists in the abovementioned  movies, perhaps one should reconsider the content children are prone to watching. Besides gender and sexuality, Disney is also known for little or no representation when it comes to people of colour. There is one black Disney princess, Tiana and she spends the majority of the time in the movie as a frog. Pocahontas (1995) is a movie with loose historical accuracy where parts of the story have been modified to make the story ‘less violent’ and thus downplaying the struggles of the native people of America. There is a singular East Asian princess – Mulan – and one Middle Eastern princess – Jasmine – and the race representation ends there. Disney has even been accused by many leading news agencies like CNN, MSN, Washington Post and many others of having racial slurs in their older movies like The Aristocrats (1970), Dumbo (1941), Lady and the Tramp (1955) and Peter Pan (1953). Besides race, a study done by Sarah Coyne and her colleagues talk about how Disney movies also spread the idea of an ‘ideal’ body type leading to body dysmorphia as well.

However, there is a much needed change that is brewing in Disney and this can be seen in their newer movies like The Queen of Katwe (2016) which features a black-majority cast, is directed by Mira Nair – an Indian woman – and is the story of a girl from the slums of Uganda who reaches the World Chess Championship. Raya and the Last Dragon (2021) is another noteworthy example of this where the lead character is a Southeast Asian woman who is on a quest to save millions of citizens from her kingdom; there are even hints of a queer relationship in the movie between the protagonist and the antagonist. Surely one can see the change that Disney is trying to bring about and should do this as childhood is a stage where the individual understands the workings of the social world and it is important that this understanding be broader than what Disney is currently displaying, and is inclusive.