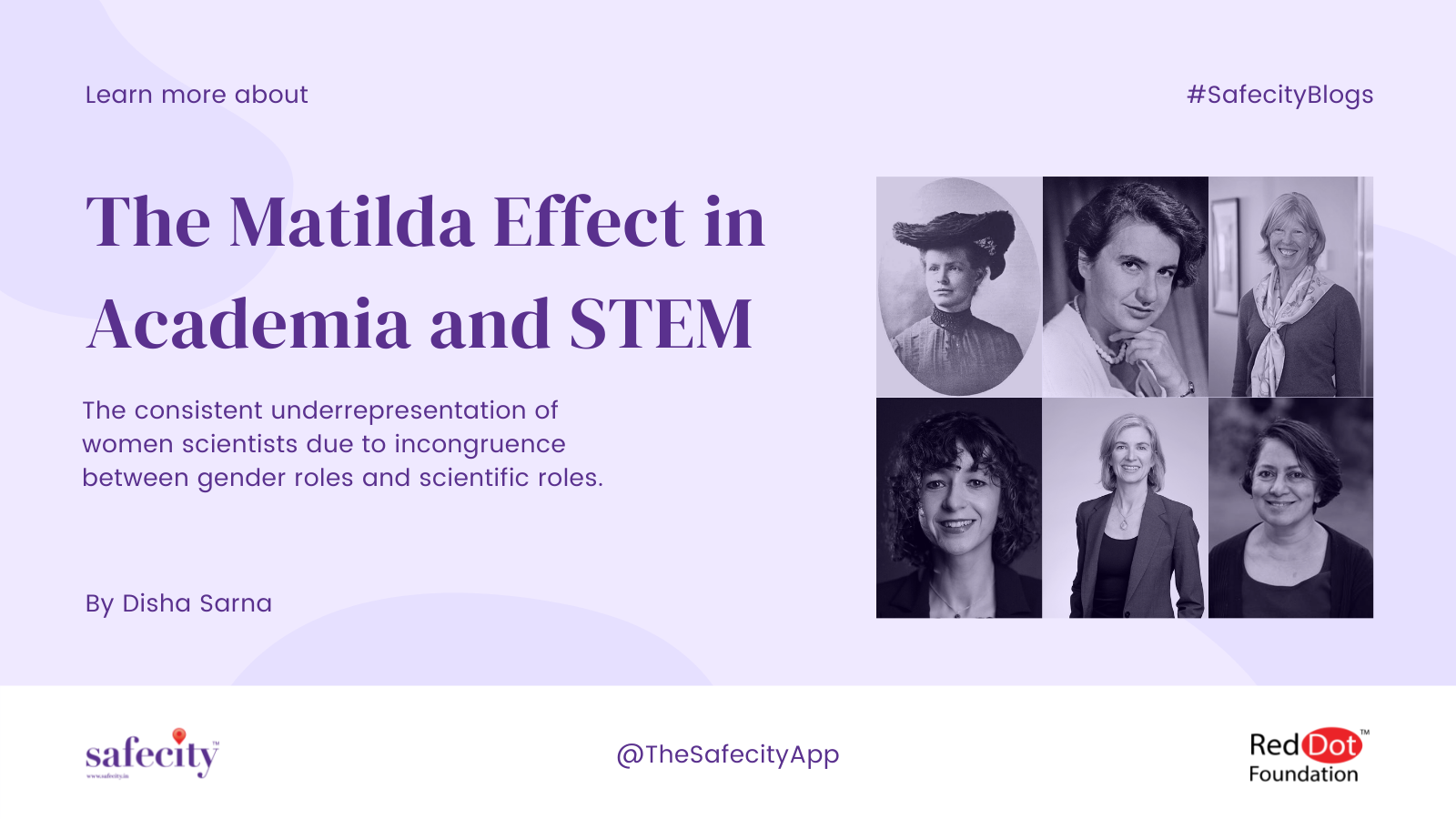 Amplify Change, Know Your Rights, Laws, Safecity, Safecity Blogs
Comments are off for this post

The Matilda Effect is essentially the consistent underrepresentation of women scientists due to incongruence between gender roles and scientific roles. The term was coined in the 19th century when Matilda J Gage, a feminist activist, talked about the constant lack of recognition of women scientists in her article ‘Women as Inventors’. The Matilda Effect finds its foundations in the fact that women are often associated with qualities better suited for tasks pertaining to human resources and social work instead of more objective qualities which are typically labelled as ‘masculine’. Women in academia and STEM often struggle to garner colleagues’ attention, and their work is often deemed not as important as the male majority’s.  This effect has become a pattern of sorts when it comes to women in academia and STEM and this blog aims to provide the reader with a historical, contemporary and current perspective just to show the extent to which women still face obstacles in this field.

Although women have been intertwined with science for as long as scientific inquiry has existed, they have failed to garner the same amount of attention as men have. On the contrary, there have been numerous instances where men have stolen the spotlight from women and presented works where women played a key role without any credit. An example of this would be Rosalind Franklin who was essential in the discovery of the structure of the DNA. Everyone has heard of Watson and Crick and their discovery of the double-helix structure of DNA but the lesser-known fact is that it was Rosalind Franklin who provided them with an X-Ray of DNA (called Photograph 51), which was the evidence behind the double-helix. However, when Watson and Crick published their work Franklin received little credit. Another example of this would be Nettie Stevens who was one of the earlier supporters of the fact that the sex of the offspring is determined by chromosomal factors and not environmental ones. She had to fight hard to get an education in the field of science and later went on to work with many big scientists like Thomas Morgan Hunt. However, her work is rarely recognised even though it played a crucial role in establishing the causes for sex determination.

In contemporary times, only a few things have changed. The number of women in academia and STEM has increased and so has their recognition. Women are behind some of the most groundbreaking research that is being done at the moment. Jennifer Doudna and Emmanuelle Charpentier recently won the Nobel Prize in Chemistry for their discovery of the CRISPR Cas9 system in bacteria and how it is essentially a pair of ‘genetic scissors’, which can alter the genomic sequence and is being used to treat chronic diseases like sickle cell disease. Cynthia Kenyon is the recipient of the Dickson Prize for her work regarding the ageing of cells and how it is a product of genetic regulation instead of haphazard decline. Sunetra Gupta is one of the world’s leading experts on epidemiology and infectious diseases and has played a crucial role in talking about the steps that need to be taken to end the covid-19 pandemic.

These examples are surely an indicator that things are different from how they used to be. However, it is essential to look at the statistics to see if the change is substantial or just superficial. A recent study by the AAMC showed that women have a significantly higher drop-out rate in medicine where they constituted a 50.9% of the applicants and a 51.6% of the matriculants, they only constituted 47.9% of the graduates, which is lower than that of men. Women often drop out because their chances of rising to a position of leadership are quite slim, or due to the unfavourable work conditions, they experience with women facing discrimination, sexual assault and harassment at most research institutes. Another study done by the Harvard Kennedy School talked about how interest garnered by abstracts of articles was dependent on the gender of the author and showed that researches authored by male scientists were considered more robust than those authored by women scientists. In another study, women candidates were ranked as less competent than male ones and less hireable, getting a score of 6.66 while men got a score of 7.18 on a scale of 9.

How exactly does one combat this persistent issue that exists in academia and STEM? Firstly, it is important to address the systemic biases in place at most institutes and install anonymous and effective safeguards to ensure that women candidates are not being harassed or discriminated against. Since this bias is too deeply ingrained, it will surely take time to remove the stigma that surrounds women candidates but if the safeguards are executed well, it is possible. A study done by Devine and colleagues showed that intervention and gender training can lead to more gender-neutral hiring, which can ensure that women get the jobs that they deserve. In the study, after two years of attending gender intervention workshops, departments hired 18% more women, promising a better future for hiring women in academia and STEM. Secondly, to encourage more women to enter the field of academia and STEM, the representation of women in media needs to change. Recent research by Bond showed that stereotypical depiction of women in television led to a decreased interest in STEM and longer periods of exposure to counter-stereotypical scenarios where women are excelling in STEM fields could garner the interests of more women. In the study, girls exposed to the stereotypical portrayal of women rated their interest in fields of STEM as a 2.08 on a scale of 3 which is lower than girls who saw the counter-stereotypical portrayal of women, who rated their interest as a 2.48. This two-pronged approach is one of the many that can be implemented to ensure that the Matilda Effect and the gender bias that persists in academia and STEM decreases.