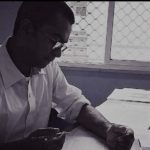 Sreemay Rath is a writer based out of Mumbai, currently a student of Humanities in the Navy Children School, Mumbai. He has written and published a short length novel and two books of poems compiled by him.  His poems have been recently selected for publication by Blue Rose Publishers. He received a regional award from Kartikey Sarabhai (Son of Vikram Sarabhai) for his presentation on the sustainable development of the ecosystem.

The Effects of Parental Alcoholism on Children

Children often expect their parents to be their role models, however they are often the ones who suffer when their parents start having drinking problems which amplifies the entire scenario at times.

One misconception that many alcoholics seem to have is that their drinking does not affect anyone else. In reality, it does and children of alcoholics tend to be the most vulnerable. In fact, the effects of alcoholism on children are sometimes so profound that they last a lifetime.

Children belonging to families with a history of alcoholism tend to suffer both academically and socially. A stereotype has also been noticed where children associated with alcoholic families tend to lack moral conduct. However it all comes down to a lack of principle and responsibility which most alcoholic parents tend to lack, that is, control. Without control and regulation even an immune system friendly antibiotic has fatal consequences.

To demonstrate just how hazardous parental alcoholism can be to children, consider the fact that many of the characteristics described by adult children of alcoholics are among those also reported by children who were physically or sexually abused by a parent.

Alcoholism can affect the family atmosphere

Today, experts who study alcoholic families know that family and marital problems often begin because of alcoholism, but they also learned that spouses and children may contribute to the drinker’s habit and make it worse. Some of the families allow heavy drinking to continue rather than deal with serious family problems, and keep the habit going in exchange for keeping the family together. Denial is an essential problem for alcoholics and family members.

Here are some examples of how a parent’s alcoholism may affect their children:

The Need to Guess What Normal Is

Because they did not have an example to follow from their childhood and never experienced “normal” family relationships, adult children of alcoholics may have to guess at what it means to be normal. With that, they sometimes can’t distinguish good role models from bad ones. Also, some children grow up never being comfortable around families because they are uncertain of how to act or what to say.

Judge Themselves without Mercy

Some adult children of alcoholics find it difficult to give themselves a break. They feel inadequate and never good enough. They may have little self-worth and low self-esteem. In addition, children of an alcoholic parent may find themselves thinking they are different from other people. Consequently, they avoid social situations and have difficulty making friends. They may isolate themselves as a result

Take Themselves Too Seriously

Some adult children of alcoholics take themselves very seriously and can be their own worst critics. Over time, this can lead to anxiety and depression. For example, one sign you may notice is that it may be difficult for a person who grew up with an alcoholic parent to lighten up at a social gathering because they may have witnessed many holidays, vacations, and other family events sabotaged by the alcoholic parent.

Have Difficulty with Intimate Relationships

In order to have an intimate relationship, one must be willing to look to another person for interdependence, emotional attachment, or fulfilment of their needs. Due to trust issues or a lack of self-esteem, adult children of alcoholics may not be able to let themselves do that. In other words, they may struggle with romantic relationships and avoid getting close to others, in general.

What kind of abuses do children suffer at the hands of alcoholic parents?

If their alcoholic parent was emotionally unavailable or perhaps physically not around, grown children of alcoholics can develop an absolute fear of being abandoned. As a consequence, they find themselves holding on to relationships they should end just because they don’t want to be alone.

If a child’s alcoholic parent was mean or abusive when they were drunk, adult children can grow up with a fear of all angry people. They may spend their lives avoiding conflict or confrontation of any kind, thinking it could turn violent.

Because they constantly judge themselves too harshly, some adult children of alcoholics are constantly seeking approval from others. They can become people-pleasers who are crushed if someone is not happy with them and can absolutely fear criticism.

Perhaps to avoid criticism or the anger of their alcoholic parent, many children from alcoholic homes become super responsible or perfectionists. They can become overachievers or workaholics. On the other hand, they can also go in the opposite direction, becoming very irresponsible members of society.

Once you, as an alcoholic, admit that you have a problem or an addiction, there are many ways to seek help and overcome your addiction. An alcoholic will never be “cured”, they will always be “recovering”.

Joining Rehabilitation Centres that have a 21-30 day program is helpful to begin the process of deaddiction and recovery. If you know a parent who is an alcoholic, try to have interventions for them with their friends and family.