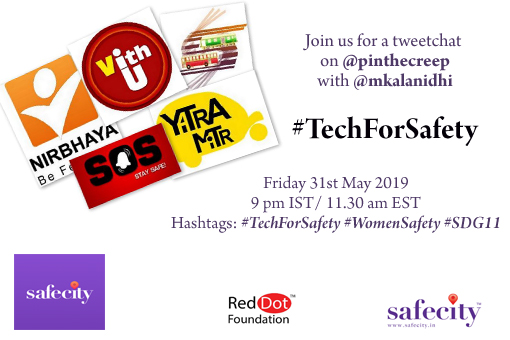 The chat began by asking the audience whether technology helps in aiding safety or is it just a superficial solution to a deep rooted problem. A few members agreed that technology helps in aiding safety through various apps and functions, while others debated that this is a deep rooted problem which cannot be solve merely with technological advancements. Technology is also often used to access personal information which can be a privacy breach. The audience was later asked about some of the safety apps they have used in the last three months, they responded with apps like Hawkeye, Suraksha, Shake2Safety, etc. The next topic of discussion was whether society was putting much emphasis on women being safe and less focus on men behaving themselves. The audience agreed that most of the times women are restricted in the name of safety and often the blame shifts on women for any mishaps that occur rather than teaching men to behave properly. Whenever issues take place there are new safety apps or regulations but no mass-counselling sessions for men. The chat ended by asking the audience their views on whether we should focus more on changing mind set or creating new tech aids.