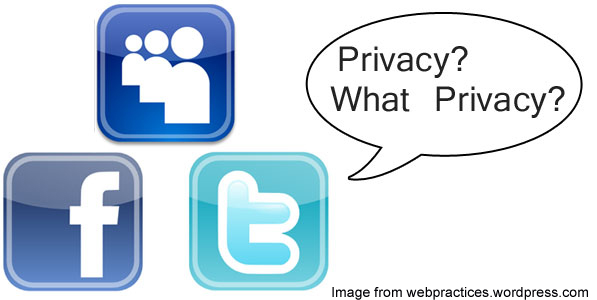 As much as it is important to stay at par with the social life of others and connect with the world, it is equally important to reveal personal matter (opinions, suggestions, pictures, comments, etc.) only to an extent that it doesn’t offend or defame others and put your own privacy and security at stake.

As a matter of fact, social media and privacy contradict each other and stand at completely opposite ends. By this I mean to say, that where there is privacy, there comes a restriction on matters/aspects of personal life that can be revealed and where we want to reveal our personal life without the fear of security, privacy cannot be demanded. The question that comes to light is, can we have a middle path to these two terms that are the two extremes of one yardstick?

Social networking has lessened the social barriers that existed between strangers . While the advantages of this cannot be denied, this means that a fundamental layer of protection that a woman had, has been dropped.

In today’s era where the first thing we all do on a simple dinner or coffee night-out is to post a picture on Facebook, Instagram or Snapchat. What we fail to realize is the fact that by doing so repeatedly, we’re inviting trouble for ourselves. Today the trend is such that ‘likes’ on a post boosts our self esteem and confidence, having many ‘followers’ makes us happy and this just makes us want to reveal ‘a little more’ of our personal space.

With the increasing number of followers coupled with the excitement of having a greater number of friends makes us accept requests from people who are unheard of while their mere existence on social media is to entrap girls.

Today it is perfectly permissible for a total stranger  to strike a conversation with a woman and a surprising fact is that his behavior will not be termed as ‘creepy ‘if he accesses her personal information, him asking about her whereabouts, likes and dislikes are ignored and just seen as annoying. It means that women do not have social support in any of these situations.

Another alarming question is, how safe are women on social media platforms? Can they demand privacy? Can they rely on the cybercrime laws in India?

While one would look for a legal shield to battle such harassment, there are several loopholes that still remain to be plugged in the Indian context. Advocate Pavan Duggal (a specialist in cyber laws) says, “Cyber laws in India, particularly in case of women have not been effective. It is also pertinent to point out that India does not have any dedicated legislation on cyber crimes. All cyber crimes are enshrined under the Information Technology Act, 2000 and the Amendment in 2008”

While the online crime spreads its malicious wings far and wide, ‘being on an alert’ seems to be the best policy. The best women can do is to reveal only as much as is required and avoid making personal details available on the cyber space. In the case of tech-savvy women, it would be important to ensure that they do not leave important personal and sensitive information on the social network. To have personal interests, preferences, hobbies, likes and dislikes listed on a platform would be inviting risk.

By posting on social media, do we give up our Right to Privacy? And then, does “Freedom of Speech” as a right come into picture?

By its very nature, social media is very enticing, the lesser you see the more curious it gets. No doubt, it does reduce the social gap but the key is to find the balance between our security and access. Social media comes with its own share of dangers to women and their privacy, but in the end the remote control lies in our hands and more necessarily in our minds.