Safecity (Red Dot Foundation) in collaboration with the Rosary Samaj Seva Kendra (Our Lady of Rosary Church) held a Social Entrepreneurship training workshop with 21 women of their Domestic Workers Cell on January 18, 2016.

The aim of our Social Entrepreneurship Workshop is to empower women to become financially independent and foster an entrepreneurial spirit amongst them.

Salini from Safecity started off the session with a round of introductions allowing an insight into the daily lives of the domestic workers. Their stories ranged across ages and situations, some had started working while they were children and had been working for over 25 years now. This enterprising group spoke of their monthly meetings where they discussed financial problems and family issues, but very rarely themselves. This common sentiment was embodied in a statement one woman made, “Pehle sab ke liye, baad main khud ke liye” (First for everyone, then for ourselves)

This served as the starting point for further interaction; the women were encouraged to think of themselves as focal to any discussion about their life. Seeing as their main concern was financial, there was a focused discussion on their current financial status and how it can be improved. Most had access to formal banking systems; but half held joint accounts with their husbands and no independent account. All the women at the workshop have a hectic daily schedule, with little time for anything else. The women stated how their savings are minuscule owing to increasing expenses.

10 of the 19 women said they were sole bread winners in their family, their spirit to do more encouraged them to think along the lines of starting up their own small businesses, guided by Salini. The Safecity team members discussed the idea of starting up Independent or Samajik (Social/Collective) business ventures with the women and aided them in developing certain ideas.

Women were encouraged to think of skills they possess and how they can market these skills to start their own venture. With a little prodding the women came up with several ingenious ideas. A group activity that followed helped them build further upon their business ideas and present it to the others.

Keeping in line with earlier discussions in the workshops – talks regarding setting up Self Help Groups (SHGs) was initiated. The women found the idea of starting SHGs interesting. SHGs appealed to their needs as it would be based on trust and community ties – it would also initiate the habit of saving amongst them. The team from Rosary Samaj Seva Kendra was extremely supportive of the idea and set in motion plans for the same that day itself!

With examples from our previous Social Entrepreneurship workshop, further guidance along with an extensive discussion on possible challenges to their business ideas – the women were set to get together and work on these ideas. 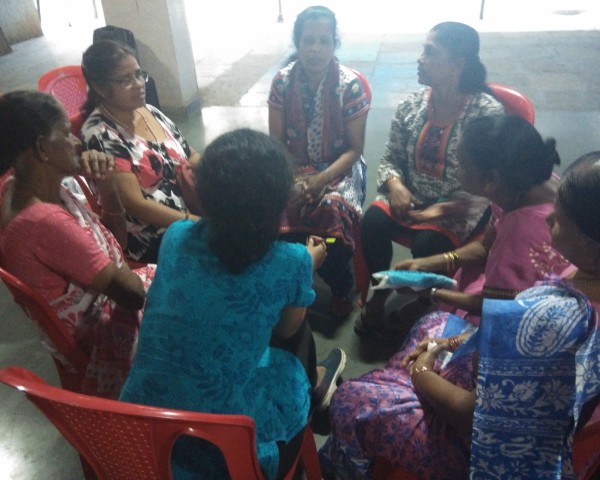 The workshop was a huge success; it not only gave us the chance to interact with these immensely hardworking women but also gave them the impetus needed to start their own independent ventures. We are so grateful that Safecity has been invited to hold further such workshops at the Church for different groups.