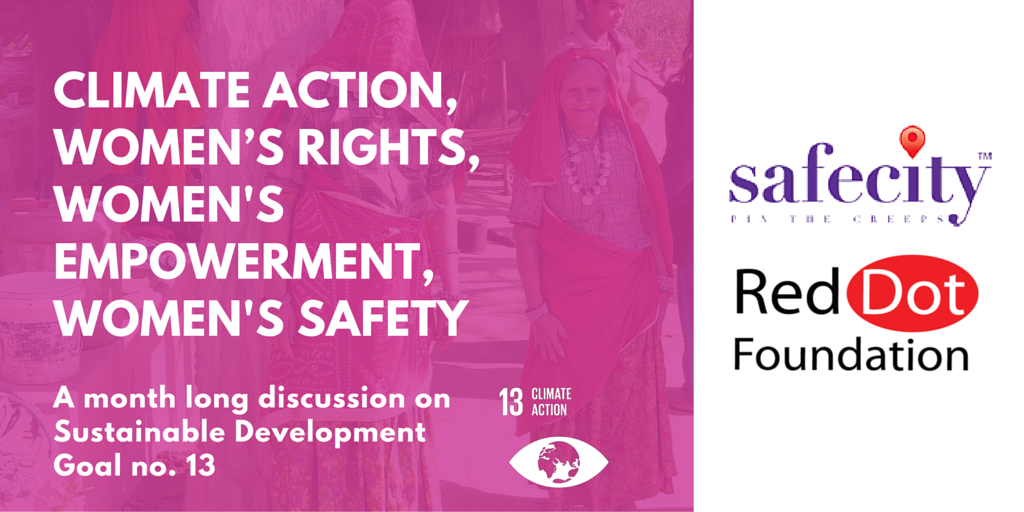 During the month of May, Safecity discussed the UN’s Sustainable Development Goal 13- Climate Action specifically highlighting its relevance to women. Their higher vulnerability to climate change and the measures they are taking to combat it in terms of SDG13 targets of building resilience, adaptation, impact reduction as well as planning and management to bring about climate change were also debated upon. 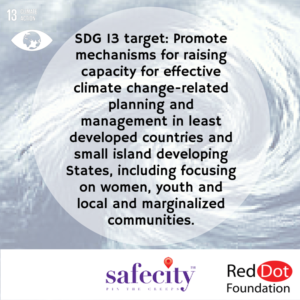 Latha Sankarnarayanan @Lats_tweets, a cool ecoprenuer and sustainability consultant, curated our Twitter account for two weeks in May discussing the relevance of SDG 13 and its impacts.

Key points that were discussed-
• Impacts of climate change and India’s vulnerability
• Recent environmental changes- droughts, floods, storms all a result of climate change
• Danger to all kinds of life forms
• Women have socio-economic, political barriers, health limitations
• Neglect of regional planning
• Development plans need to be climate sensitive
• Climate change as double edged sword which impacts the poor most and creates poverty
• Vulnerability due to lack of resources or access to it
• Parks are the lungs of the city, mangroves our buffer system
• Climate sensitive buildings
• New and clean tech solutions by industries to reduce carbon emissions- action and accountability is necessary 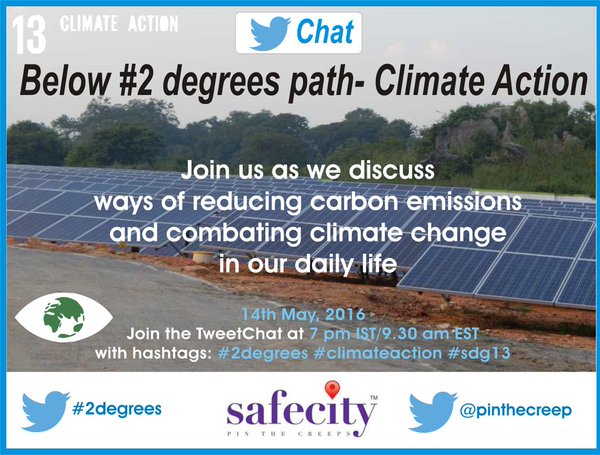 The TweetChat deliberated upon the effects of climate change on women and specifically their role in SDG13. The whole chat is compiled here. 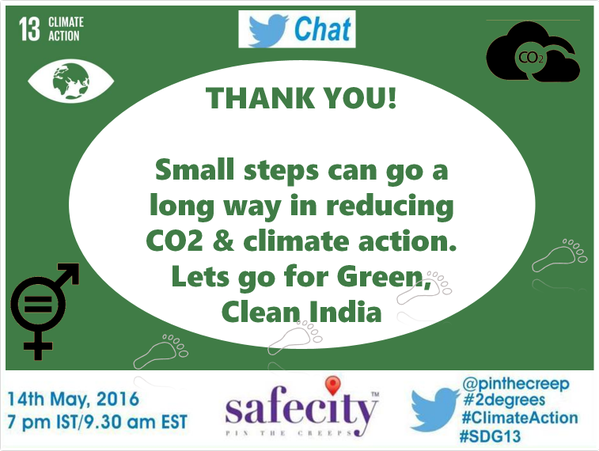 Climate Action was discussed from a gendered perspective highlighting not only their vulnerability but also initiatives that women have been taking as climate actors. 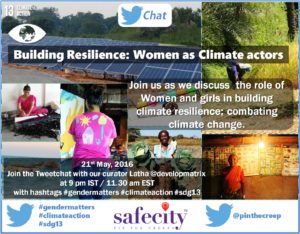 The TweetChat deliberated upon the role of women and girls in building climate resilience. The whole chat is compiled here. 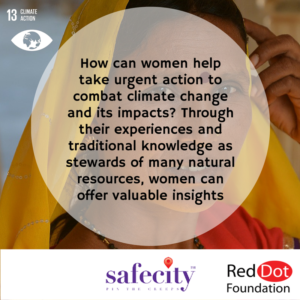 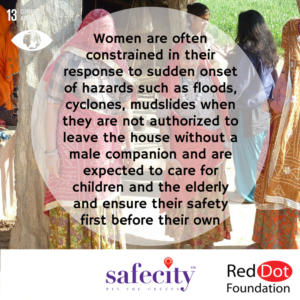 Renita Siqueira @renitasiqueira, Safecity’s Communication Officer, curated our Twitter account for this week. Factors that affect women’s safety during times of climate change were discussed along with ways to increase women’s participation in safety measures.

Key points that were discussed-
• Women left unaccompanied during disasters, breakdown of social controls & protection
• Women double victims of climate change- change n patriarchy
• Lack of say in policy making & governance
• Cultural norms put men and women at risk during climate change
• Higher death rate of women
• Women not taught basic skills that are deemed manly, leaves them unprepared during disasters
• Gender constructs- ‘men taming nature, while women conserve’
• Females prone to stress related illness and exhaustion due to caring for dependents
• Nearly 50% of farmers are women, but do not get equal credit or participation
• Train the health sector to be gender-sensitive for climate related health problems
• Gender gap affects life expectancy where the socio-economic status of women is low
• Ensure women’s safety in climate change through capacity building of women
• Sensitivity, equal relief compensation during disasters
• Women’s safety is at risk due to domestic n sexual violence post-disaster

The TweetChat focused on ways of ensuring safety for women as a part of climate action. The whole chat is compiled here. 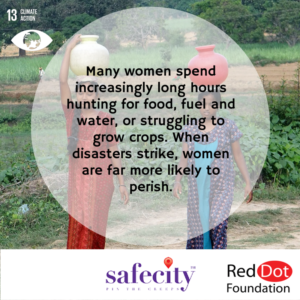 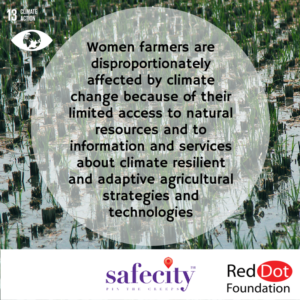 “Women play a key role in adaptation efforts, environmental sustainability and food security as the climate changes and should have an equal say and participation in policy making and governance for climate action.”

With this, Safecity’s coverage of SDG 13 comes to a close. Follow us on @pinthecreep to keep up with the SDGs and more.