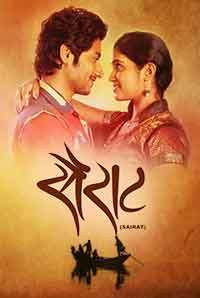 Sairat: Why We Need to Talk About the Intersection of Caste and Gender

Sairat was one of the few movies in the last year that managed to touch the collective conscience of the audience. The protagonists took us through an epic journey of the reality of India, where despite villages being ‘modern’ in all respects, with phones and colleges, and well organized cricket tournaments, the strongholds of casteism still limit ambition and agency. Archie (played by Rinku Rajguru) exudes confidence and assertiveness that is a by-product of her upper-caste upbringing, while Parshya (played by Akash Thosar) is the inherently shy son of a fisherman from lower caste. Archie fearlessly drives tractors and Bullet motorcycles, bullies boys bathing in a well so that girls can have their turn at swimming and even wields a revolver with ferocity, she drives the love story forward as well by being the one to initiate the love affair even though Parshya was the one who had been staring at her from afar for the longest time.

Archie and Parshya run away from Archie’s powerful upper caste family to start a new life, even sleeping on benches in bus stations, but of course, they are subjected to the harsh realities of the world when they are attacked by local goons in a new city, intending to molest Archie. Bystander intervention by a middle aged woman saves them, but it makes a shiver go down your spine to witness how easy it is for this scenario not to resolve favorably in real life. It makes one realise the dangers homeless women face, living and sleeping on the streets and the constant threat they live under. When we talk of street harassment, women who live on those streets have to be part of our feminist interventions.

The movie also helps us understand the conflation of caste privilege with exercising freedom and agency as a woman, and ultimately how it is all for nothing as she is subjected to an honor killing. The concept of a family’s honor residing in the mobility and sexuality of their female members, is not new to India. The love for children is superseded by deeply encoded caste and gender bias, manifesting in exercising control over their choice of life partner, even if it means taking their life. More than 1,000 honor killings are reported in India every year, and most of these are caste related. It is no surprise when women are still subconsciously and consciously treated as property by their families. Women have been historically ‘acquired’ in battles and wars, and are prone to sexual abuse in all conflict and disaster situations, illustrated by incidents in our very own country as well. Do we know about Kunan Poshpora and Bastar?

Sairat is a movie that makes you want to delve deep into questions of caste, gender and honor in this country and take a hard, long look at our society. Are we doing enough for ALL women? Are we doing something to protect them? Let us stop being mute bystanders. It is time for us to wake up to our responsibilities to all women around us.