Safecity Monthly Updates
Comments are off for this post

October was a very busy month for us with a lot of exciting work happening. Read on to know more!

On October 2-3, 2015 Safecity in association with Daan Utsav and Indian Oil set up a booth at the Indian Oil petrol pump opposite Majas Bus Depot in Jogeshwari (E) as a part of the Joy of Giving Week.

We engaged with people coming into the petrol pump and did surveys around the petrol pump to collect reports of sexual harassment from women living or working in the area. We also conducted a mapping exercise with quite a few people who stopped by to speak to us and share their experiences. They pinned spots in the city where they had faced harassment on a map we had put up at the booth.

Read the full report on the Joy of Giving activity on our blog here. 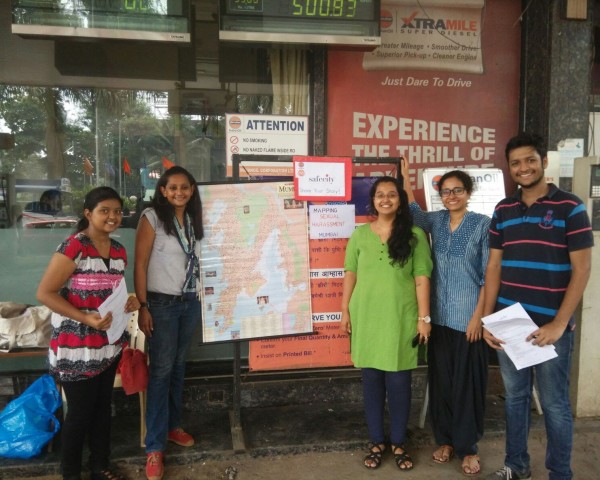 Report on our international collaboration

Safecity along with Polycom Development Project based in Kibera, Kenya and Social Empowerment by Empowering Women (SEE-W) based in Kathmandu, Nepal are crowd-mapping sexual violence in public spaces of Kibera and Kathmandu, respectively. This project is made possible as a result of the grant received from Vital Voices; the founders of all three organizations, Elsa D’Silva (Safecity), Jane Anyango(Polycom) and Samjhana Phuyal Pudasaini (SEE-W) are Vital Voices Fellows who have come together to work on an important issue.

The Safecity team, as a Knowledge partner, worked closely with the Polycom and SEE-W team by conducting trainings and workshops for their teams on campaigning, community organizing and the crowd-mapping technology to influence social and systemic changes for safer spaces.

Read the report on these trainings on our blog here. Safecity was invited to be a part of this interactive session with the Commissioner of Police, Delhi. Several other NGOs and activists have come together for a safer city. The Delhi Police is using Safecity’s crowd mapped data on sexual violence in public spaces and will soon be engaging with us in the communities where we are active.

In a unique collaboration with Action India and Restless Development, Safecity is crowd mapping sexual violence in public spaces of Dakshinpuri and Sanjay Camp in Delhi.

Check photo updates from the workshops we’ve conducted so far as a part of this ongoing collaborative effort on our Facebook page here. Safecity was a part of the consultation on surrogacy related issues organized by the National Commission for Women in partnership with UN Women and UNFPA today. Important issues were raised and concerns were discussed relating to the Draft Assisted Reproductive Technology (Regulation) Bill.

Safecity was honoured at the 2015 Textile Sustainability Conference held on October 5-7, 2015, at JW Marriott, Mumbai.

Check out the details of the event on our blog here.

Inspired by how Indians have been harnessing the power of Twitter for public safety and activism, Safecity India (safecity.in) is integrating the Twitter platform for real-time public conversations to empower people to share their experiences about public harassment.

@SafecityIndia aims to contribute to the cause of women’s safety not only by highlighting sexual violence in general and sexual violence in public spaces in particular but also by offering real-world solutions. With our active volunteers across the globe reviewing these stories, @SafecityIndia will include all reported Tweets in a monthly trend report submitted to the police and may also direct certain ones to relevant law enforcement agencies so they can take timely action.

Help make your city safer through @SafecityIndia. Here’s your chance to speak up about public harassment: https://t.co/BTqnLLYejr

@RichaHingorani, thanks for reporting. If urgent please call police helpline 1091 or 100. pic.twitter.com/V5oAyG4jAm

Online crowdsourced maps, a customized dashboard, and automated responses will be provided for each city through this collaboration. @SafecityIndia will also share story trends and hotspots on an online map, which will serve as a safety guide for citizens and local authorities.

Read more about this collaboration on Twitter’s blog here, written by our Managing Director Elsa D’Silva.

From 23rd to 28th October, 2015, Safecity conducted a series of interactive workshops with Grade I and II students at St. Joseph’s Convent School, Bandra on Child Sexual Abuse Awareness.

In total this series of workshops was conducted with around 400 Grade I and II students. Check out photos from the workshops on our Facebook page here.

Through our tweetchats we are trying to facilitate important conversations around various issues related to gender in general and women’s issues in particular. This month we had some very enriching discussions on a variety of topics such as a chat on the UN Special Rapporteur’s report on Violence against women in India, whether sex education can curb child sexual abuse in India, busting myths around fitness for women and on making cities safer for female commuters and travellers.

Check out the storified TweetChats on our blog here, here, here and here.