Safecity in association with Daan Utsav and Indian Oil set up a booth at the Indian Oil petrol pump opposite Majas Bus Depot in Jogeshwari (E) for two days as a part of the Joy of Giving Week.

We also conducted a mapping exercise with quite a few people who stopped by to speak to us and share their experiences. They pinned spots in the city where they had faced harassment on a map we had put up at the booth.

While on one hand there were a number of people who were very responsive and impressed with the work we are doing at Safecity, on the other hand we faced some difficulties in speaking with people who were unaware of what constitutes sexual harassment and therefore couldn’t speak to us about whether they faced it or not.

This activity enlightened us that we still have a long way to go in terms of creating more awareness about sexual violence in public spaces and encouraging more women to report these incidents. But overall it was a great learning experience for us. We collected over 40 reports and gathered many supporters who identified with our work and expressed solidarity.

In the end we at Safecity would like to thank our volunteers, Abhinav, Megha, Pragya and Sagarika who took the time out for this event, the officers at the Indian Oil petrol pump Mr. Hasmukh Patel and Mr. Kirit Patel who gave us the space and without whose support we wouldn’t have been able to carry out the activity at all and lastly, Indian Oil and the Daan Utsav Team.

Check out pictures from the event below! 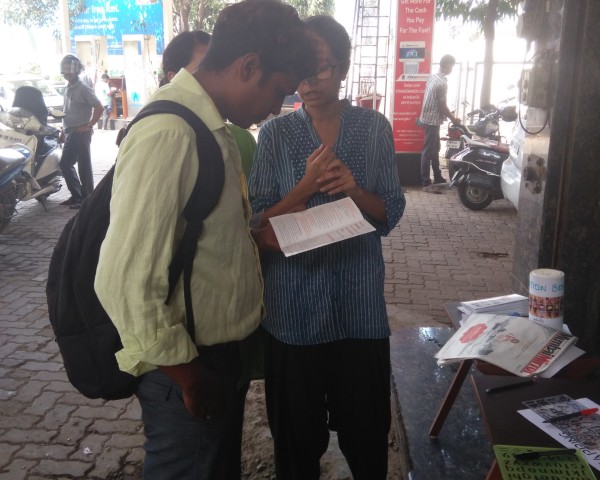