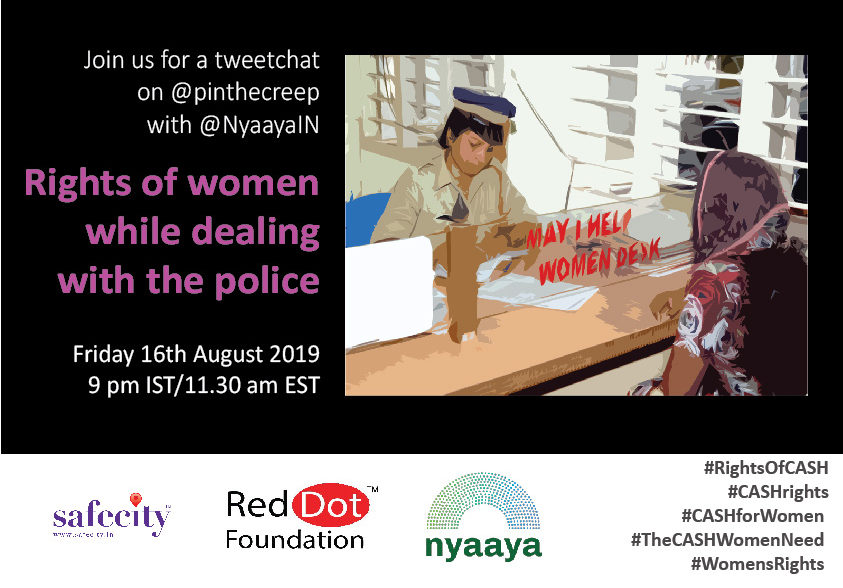 Know Your Rights, Laws, Safecity Tweetchats
Comments are off for this post

We had @NyaayaIN conducting a tweetchat for us on Friday, 16th August about ‘Rights of women while dealing with the police’.

The tweetchat began by discussing what a woman can do if the police are using brute force on her for resisting arrest. It was suggested that the best idea is to not resist and insist on having a lawyer present. Next, it was discussed what a woman can do if the police refuse to give her reason for the arrest and/or enter her home without permission. This was followed by discussing that according to the law, the police have to register an FIR filed by a woman even if they believe that the crime wasn’t serious enough. Next point of discussion was Zero FIR, a concept introduced after the Nirbhaya case where the police delayed filing the FIR because they were fighting over whose jurisdiction it would fall under. We discussed how women can file a Zero FIR at a police station even if the crime wasn’t committed in that jurisdiction. The question posed next was whether women have the right to refuse being searched when they are being physically searched by a male police officer. The participants, as well as the curator, agreed upon the fact that women can only be physically searched by women police officials. If a man is physically searching her, she has the right to deny it. Any search beyond this will be sexual harassment and the women can take action against such male police official. The last subject of discussion was the recourses that women have in case the women police officials mistreat or hurt them. It was informed that in such a condition, women can complain to the SHO of the police station. In case the SHO does not turn out to be helpful, women can also file a private complaint to the Magistrate with the help of a lawyer.

This tweetchat proved to be pretty informative about all the legal knowledge women need to have in order to safeguard themselves.