On the 16th of April, the last day of the Anti- Street Harassment week, 13 girls from Bandra Plot occupied a space generally used by boys.

During our campaign with the girls of Bandra Plot, it became clear that the girls did not access many public spaces for a variety of reasons- one being the fear of harassment. This is especially the case when it comes to open grounds or gardens, which are primarily occupied by boys and men.

Men occupying public spaces itself may not make a space unsafe, however the lack of women in a space points to the fact that women do not see these spaces as accessible- not to mention that many girls have experienced sexual harassment there.

Through sport and games Safecity, along with Vacha Trust, decided to make girls visible in the Highway Municipal garden in Jogeshwari East. It is a small garden. There were only boys playing there when we arrived.

Before we started playing, we had a short discussion on girls and sports. Many of the girls said that they don’t go to a ground or garden to play- they are mostly limited to playing in their school or their homes. As one girl poignantly put, many girls stop playing altogether after the age of 12 or 13. The discussion moved to restrictions placed on the movements of girls, under the premise of keeping them safe.

We also spoke about women in sports in general, and how they are are not given the same level of recognition as their male counterparts. We looked at the example of the Pro Kabaddi League and how, even though India has an established women’s kabaddi team, there is no women’s league.

The girls then divided themselves into teams and began an engaging game of Kabaddi. Slowly some of the younger boys came to watch and cheer for the girls. After two rounds, when the girls were deciding between playing Kho-Kho or something else, the boys asked whether they could join in as well.

The girls in action! 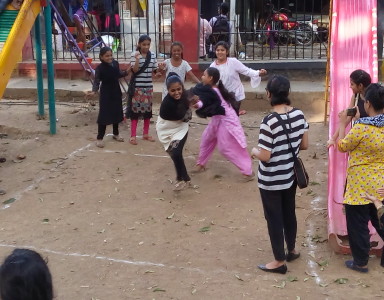 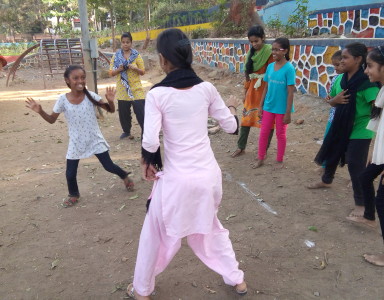 It was interesting to see that these boys had no issue playing with the girls, and in fact had liked the way they were playing. We had a short discussion with them as well, about girls playing in gardens. They were happy to see girls playing here, as that never happens. When asked why, the boys said that older boys sometimes harass the girls, making the area unsafe for them. The discussion ended with them offering their full support to girls who wish to access public spaces.

The girls continued with a round of Kho-Kho and also spent some time exploring the garden’s slides and monkey bars.

We rounded up the evening with a short feedback session. The girls really enjoyed the day and appreciated the opportunity to engage in sports. They said they would try to come out more often. However, there are many more hurdles in accessing public spaces for these girls- mostly the restrictions placed on them at home. We shall work on this further in the duration of our campaign.