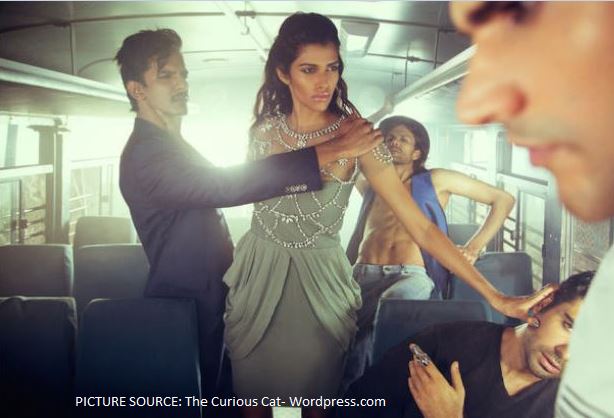 Public transport is considered as the most economical and efficient way of transportation in India. It is the most common form of transportation especially in metropolitan cities like Mumbai where the population is dense and the number of working professionals and students is high. The distance between the workplace/educational institutions and the place of residence is quite significant in metropolitan cities and not everyone can afford a private automobile. Thus, public transport is the best-suited option. As much as it is economical and feasible, public transport has not proved to be much of a treat to women. The experiences of men and women travelling in public transport differ quite significantly. A research states that at least 8 out of 10 women have been subject to some kind of an assault while travelling in public vehicles like buses, local trains, auto rickshaws, cabs, taxis, etc. There have been frequent cases of eve-teasing, passing sexual comments, doing the indecent gesture, theft, groping, flashing, molestation, rape, and even murder. In Mumbai, two such incidents happened within a span of a week in broad daylight in the Mumbai local.

In the first case, a 22-year-old was travelling from Borivali to Mulund via a Churchgate bound train. She sat in the ladies compartment, adjacent to which was a handicap compartment that was separated merely by railings. A man from the handicap compartment started abusing her and the girl sitting next to her and started reaching out to them by putting his hands on the railing. When this wasn’t enough he flashed at them and started masturbating in public. The man got down as the train stopped at Kandivali station and tried to get inside the ladies compartment, but failed to do so as the other six women began yelling at him. He left after giving rape threats to the girl. The girl called up the Railway Police Helpline and explained the details of the entire incident to the authority on the helpline, but instead of providing any assistance the person on the line laughed and disconnected the call. Only when the girl posted this incident on social media, did the police get enough impetus to work on the matter.

In the second incident, a 14-year-old girl was targeted. She boarded a train from CSTM on a Sunday morning to reach her home in Kalyan after attending her tuitions. The ladies compartment she entered was empty at that time of the hour and thus taking advantage of this situation, a man boarded the train as it began to leave the platform. The girl asked the man to leave and pointed out that it was a ladies compartment, but the man asked her to keep quiet and started walking towards her perilously. At first, she tried to pull the chain and stop the train, but since that did not work she jumped out of the running train due to the fear of being molested by the man. The girl was found on the tracks and hospitalized; she suffered from fractures in her leg and severe head injuries.

These are just two of the many incidents that happen on the local trains on a regular basis. There are even more horrific incidents of harassment and assault of women in buses, auto rickshaws, cabs, etc. And in spite of the “security measures” taken by the government, there is no significant decline in the number of cases registered by women against assault or harassment in public places. A mere reservation of seats in buses and compartments in local trains or installation of CCTV cameras is not enough. Vigilance on part of the Police Department and related authorities is essential. In both of the above-mentioned cases, the girls would have suffered less damage if the Railway Police were vigilant and active enough to respond to their pleas.

The safety of women must be ensured not only during the time of travel but also during the waiting time at bus stops and railway platforms. There have been instances of snatching of chain and purses, whistling and hooting, groping, etc. at railway platforms and bus stops. A security system is needed to ensure the safety of women at such places. There is a desk of railway police at every railway station but unfortunately the cops are not present there at all times. In case of bus stops, many of them are devoid of CCTV cameras or any other kind of security system to protect women.

However, nowadays, there are various apps that help women ensure their security during travel like SafetyPin, Raksha, Himmat, Shake2Safety, Safecity, etc. SafetyPin has all essential features like GPS tracking, emergency contact numbers, directions to the safe location, etc. It also pins safe locations for women and is available in Hindi too. Raksha app comes equipped with a button, which will send alert to your loved ones when you are in distress along with your location. Himmat app helps to raise an SOS alert, which will send the location and audio-video information to the Delhi Police Control room. Safecity can be used to report sexual harassment in public places. These reports are forwarded to police in Mumbai, Delhi, and Goa and have been acted upon. Also, a red dot comes up on the spot of harassment and as a result hotspots of sexual harassment are created. Thus, people can check out the safety of a place before going and prepare accordingly.

Travel booking apps like RedBus provide the details of the bus route, bus number, bus driver and security contacts to the family members of female passengers who travel alone. Uber and Ola have also started providing details of the driver, ratings, and reviews to the passengers. But unfortunately, the awareness about these apps is not enough and also not every woman owns a smartphone to gain this benefit. Prominent personalities must come forward to promote these apps and spread awareness about to it to make them more effective. These steps help in adding a little to the safety of women. However, many major policies are required to ensure complete safety of all women from the moment she leaves her house until the moment she comes back home.