16 Days of Activism Against Gender Based Violence, NGOs and help, Safecity Activities
Comments are off for this post 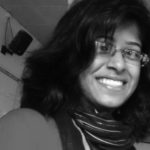 Renita is a Mass Media graduate. She is currently working with Safecity as the Communications Officer. She handles the Safecity Blog and all the communications within the team and liaises with other organisations. Watching movies, reading books and listening to music are a part of her staple diet. Being creative, she enjoys art and craft and makes personalised gifts. She believes in being herself and making a difference one step at a time. Passionate about making the world a better, just and happier place, she pens down some of her thoughts on her blog.

In a joint collaboration Men Against Violence and Abuse (MAVA) and Safecity presented a skit on sexual harassment at the workplace followed by a discussion at #DostiHouse on 5th December.

Under the guidance of Mr.Harish Sadani, the Co-Founder and Chief Functionary of MAVA, the volunteers of MAVA put up a skit called ‘Uski Ghutan’ explaining what constituted sexual harassment at the workplace. The skit was captivating and made sure it had the audience’s attention from start to end. It portrayed sexual harassment occurring both in the organised as well as unorganised sector which often gets left while speaking about POSH. They explained the POSH Act- Prevention of Sexual Harassment of Women at the Workplace along with the way the ICC- Internal Complaints Committee functions thereby giving a holistic education about the entire procedure of complaint and redressal to those who were unaware of the POSH Act.

The skit was followed by a discussion where the audience as well as the participants could put forth their views, perspectives and doubts about the Act and the realities of it that they had learned from news.

Sumati Thusoo, our Program and Outreach Officer, and Mr. Harish Sadani explained the intricacies of the Act, how it can be made all inclusive and zero tolerant in every workplace and that the onus of the redressal belongs to the company and the ICC.

It was an extremely enlightening evening which captured all our senses and actually made us think. Thank you to #DostiHouse for hosting us. It was a great and enriching experience.