College students get a golden opportunity to share their views and learn more about women’s rights!

Naina Jha conducted an Awareness Workshop about Prevention of Sexual Harassment against women at the Workplace (POSH) for 150 students at Magadh Mahila College on 18th November, 2017. 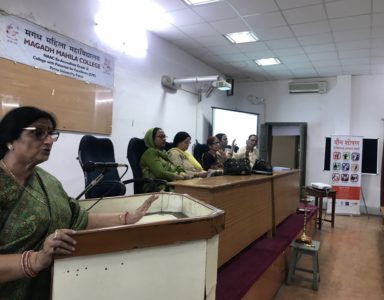 The POSH workshop was held in the premises of Magadh Mahila College. Apart from 150 students, the workshop hosted the members of Gender Equality Cell, Patna University and few teachers.  The event begun by addressing the root cause of Harassment and the causes associated with it. For instance: Was harassment age centric? Many of the participants expressed that young girls were the active targets of harassment to which the orator opined that there was no as such specific age for harassment or harasser. According to the speaker, girls ageing between 6 months to 60 years were harassed by the men of all age groups, even though not by all men.  Next question was related to the safety of girls. Many of them agreed that they felt safe and secure in presence of the street lights and in crowded spaces irrespective to the fact raised by the speaker that a lot of groping cases often occurred in public points.

‘What make you feel unsafe and how do you fight that feeling?’ interrogated the speaker.

To which most of the girls replied that hanging around during late evenings makes them feel very unsafe. And the usual technique of precaution and protection they followed was to roam around in groups and keep their close ones informed about their whereabouts. The final question asked was related to the views regarding ‘gender and sex’. Maximum answers were based on the fact that sex was biological and gender was sociological. Apart from all these topics and general Q&A session, the chief topic of Sexual Harassment and its types were explained. Amazingly many of the participants were ignorant to the fact that ogling, commenting or staring falls under the category of harassment and there were legal punishments enacted for it.

‘Nobody become rapists overnight neither are they born as harassers’- echoed the honest and unbiased view of the speaker.

‘Generally the first phase of harassment begins with ogling, commenting or staring and if ignored, the people doing these activities get a notion that girls don’t mind it. In the second phase, they usually start touching, groping, exposing, stalking or self-pleasuring and if further ignored, they get motivated to commit even serious offences with  confidence. The most serious offence is ‘rape’- which not only harms a woman mentally, physically and emotionally but is an utter shame to society as well.  “Hence, even the slightest act or offence by these narrow minded people should not go unnoticed by anyone who faces it,” finished the speaker on a serious note. As the session rolled on, mandatory topics like provisions falling under Indian Penal Code, FIR and its importance, cognizable and non-cognizable offences were explained. One of the major topic ‘The Sexual Harassment at Workplace Act (Prevention, Protection & Redressal) 2013 and the ‘meaning of consent’ were demonstrated by quoting few examples.

To make the session more interactive and interesting, the speaker allowed few of the participants to share their stories of harassment and not very surprisingly, when few of them volunteered to reveal their stories, it was discovered that sadly most of the victims remained silent and refrained from taking any action against the molesters. On hearing this, the speaker explained about the measures to be taken to prevent further occurrences in day-to-day life. Last but not the least, the speaker enlightened the listeners about Safecity, its work, importance and how it could be used to report any such offence anytime and anywhere.

The Preamble reads, “We, the People of India…”  “And aren’t women included in that ‘We’”?

With this questions she thus winded up the workshop forcing the audience to ponder over the truth of this statement. 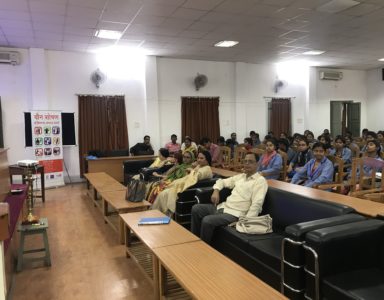