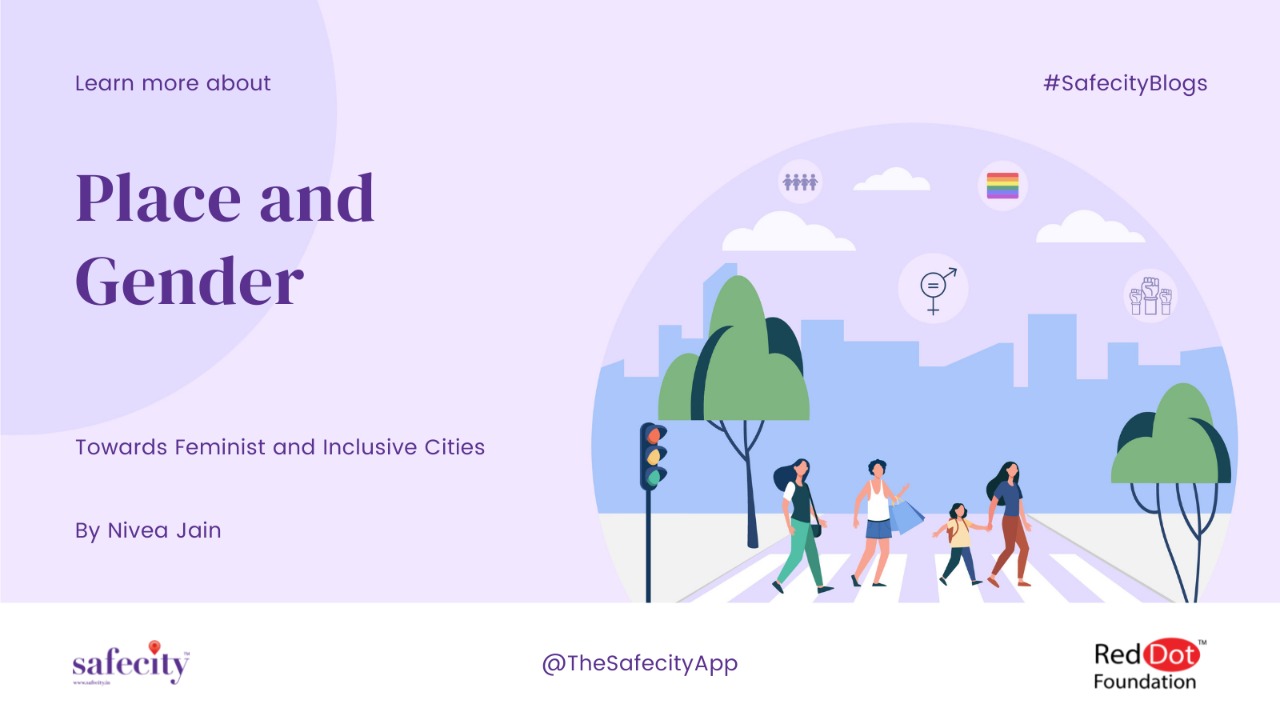 While the social dimensions of gender inequality are well documented and analyzed, its spatial dimension, i.e., how gender inequality shapes our physical spaces, remains largely unexplored. The generations of patriarchal and misogynistic outlook about gender and gender roles that have conditioned women into accepting more submissive roles, has also impacted the way women and other marginalized communities perceive and utilize their physical urban environments. The rampant violence and abuse that they face in public spaces regularly, forces them to shrink themselves and fit into the limited safe outdoor spaces that are available to them. Public spaces become transitory in nature which is used only to move from point A to point B. The idea of rest, pause, and leisure on the streets of our city becomes daunting due to constant threats of abuse. There are two key factors that have led to this alienation of the marginalized from our public places.

First, is the false sense of security we associate with private spaces. We believe that the outside, where the strangers are, is dangerous and not a place where women ought to be, beyond their restrictive timelines. However, the recent statistics on domestic violence make it clear that the idea of a home as a safe space is a misconception. During the Covid-19 pandemic, as we all quarantined at home, the National Commission for Women reported that 2,383 complaints of domestic violence against women were registered with them, just between January and May 2021 – the highest number of cases in India in the last 21 years. Yet, we operate with the assumption that home confinement provides security against abuse. Even in the more progressive parts of our society, where women are “allowed” to work, they are expected to only travel to and from work without taking any detours. As Shilpa Phadke, in a TedTalk about her book “Why Loiter?”, suggests, the safety of women in public spaces is conditional to their purpose of utilizing the space. If a woman were to simply hang around in a public place, without any specific purpose, any act of violence against her would immediately result in questioning her reason to occupy space in a public area. In some cases, it would also result in a total ban for the woman to venture out alone. While concerns for safety are legitimate, the presence of crime against marginalized communities does not suggest that the problem is in them claiming physical space in cities, rather it indicates a problem in the way public spaces in our cities work.

Beyond safety in public spaces, security in housing, income, and social status are also important aspects that are dictated by social inequalities. All citizens have a right to access all opportunities that a city can offer. However, the ground realities reveal that these opportunities are not equally accessible to all, especially to people from marginalized communities as they are under-represented in urban planning processes. This is the second factor that alienates people from our public spaces. Urban design and planning is, even today, a field dominated by male practitioners and is thus centred around the male experience. This leads to a one-dimensional approach to urban planning and issues of safety, mobility, affordability, etc., which are often only peripherally considered. Accurate representation of all the inhabitants of a city puts their struggles at the forefront and gives them an opportunity to influence how we shape our cities.

Practising fair representation in urban planning also results in diverse usage of urban spaces that allows for chance encounters and interactions between people from varied backgrounds. The philosopher Iris Marion Young, in her book “Justice and the Politics of Difference”, demonstrates the role of such interactions in bringing about social justice and how diverse spaces are instrumental in achieving the same. She writes, “The interfusion of [social] groups in the city occurs partly because of the multi-use differentiation of social space. What makes urban spaces interesting, draws people out in public to them, gives people pleasure and excitement, is the diversity of activities they support.”

The United Nations’ World Urbanization Prospects Report estimates that by 2050, 68% of the world’s population will reside in urban areas. As we witness rapid urbanization, it becomes imperative that we change our course towards more inclusive cities that foster higher standards of livability for all. How we plan our cities today will define the quality of life for our future generations.

By putting current urban planning practices under a feminist lens, we can better understand how cities function for all their inhabitants and what aspects need to be improved. Feminist Urbanism explores the relationship between various societal groups, especially gender and sexual minorities and the city, by addressing their challenges and needs, and strives to incorporate those needs into urban planning practices. For example, a woman who works at home as well as in an office, often finds it difficult to move around the city because of the inefficiency of the public transport system. Or queer, caste minority or religious minority people often find it difficult to find appropriate housing due to discrimination and threats of abuse. These experiences are often overlooked while planning for cities and Feminist Urbanism proposes that instead, appropriate and positive policy measures and design interventions be included by such experiences.

In the early 90’s, the city of Vienna began to adopt the concept of ‘gender mainstreaming’ in urban design which is a practice to equally account for men and women in policies, legislation and resource allocations. Through participatory planning approaches, they filled in the data gaps to understand how men and women utilize their urban spaces differently and were able to represent the demands of women accurately. This led to the officials carrying out over 60 gender mainstreaming urban design projects including footpath widening for pedestrians who are more often women than men, improving street lighting, adding benches for people to rest and pause, etc. A study done by two sociologists found that young girls over the age of nine were less likely to use some parks as they were dominated by boys. By simply adding more footpaths and spaces for activities other than football, young girls were able to access the park more frequently.

Baseline studies and community participation are essential tools that can define the problems that various groups face. A World Bank Report on Gender, Transport, and Employment in Mumbai reveals that women are more likely to use walking or public transport as a means of commuting. 38.9% women over 28.1% men prefer walking, 20.3% women over 16.9% men prefer trains, 14.4% women over 7.8% men prefer auto-rickshaws, and 11.4% women over 7.5% men prefer buses. Domestic duties and child-care responsibilities prohibit women from making longer work trips which directly affects their workforce participation. This clearly demonstrates a correlation between mobility impairment and loss of work opportunities for women and the need for better zoning laws and substantial investment in public transit systems.

Designing for more active and vibrant spaces along sidewalks, in public parks, near alleyways, in train or metro stations etc., and well-placed windows on buildings on the street side reinforces the idea of “eyes on the streets”– a phrase coined by Jane Jacobs, an urban writer and activist, who advocated for natural surveillance against crimes on urban streets by encouraging more people to use them. She writes, “The bedrock attribute of a city district is that a person must feel personally safe and secure on the street among all these strangers” and to invoke this sense of safety we must promote mixed-use neighbourhoods lined with shops, restaurants, community halls etc., active pedestrian movement, and bright street lights “to augment those eyes”.

While inclusive spaces have multiple benefits for all who use them, sometimes, exclusive spaces can provide more security to some communities. Petra Doan, a professor of urban and regional planning in Florida State University, and a staunch advocate of queer issues in urbanism, writes about gender non-normative spaces in America, arguing that the spaces that belong to the queer communities exclusively, have immense value especially for young queer people in search for security and community. Such spaces allow them to express their gender and sexual identities without the fear of violence and abuse while also making it easier for them to seek support when necessary. So long as discrimination against the queer community stays prevalent, exclusive spaces can provide them with a safe haven. In India, such exclusive spaces are difficult to come by. We must encourage queer-inclusive spaces such as parks, public toilets, local eateries etc. by providing robust anti-discriminatory statutes in place and conducting regular gender sensitization programs within the law enforcing units.

Our urban spaces should not make us choose between safety and our ability to move freely, and for that our cities must become feminist spaces. Urban planning alone cannot solve all issues of discrimination and inequality, but it can definitely contribute towards a sense of belonging among marginalized communities. We need diverse lawmakers and planners to work in tandem with such citizen groups to recognize the social implications of their policies and designs. Everyone has a right to their city, and we must be able to realize these rights without the threat of mental or physical harm.