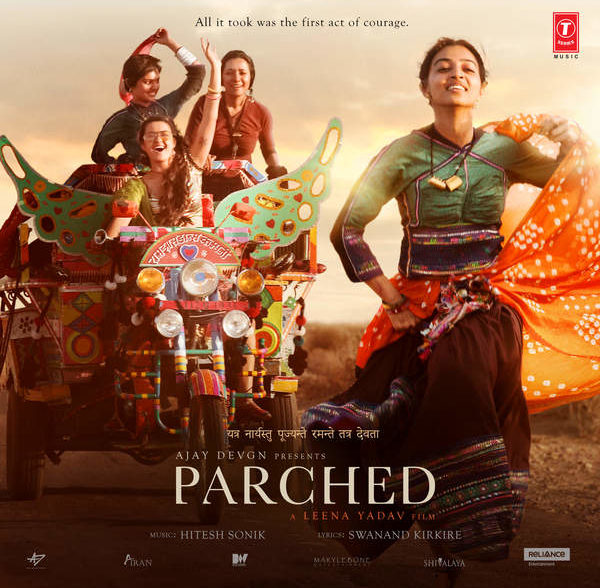 Revealing the toxicity of our gender standards

In the past year, many movies have tackled various aspects of feminism, and Parched is a movie that stands heads and shoulders above the rest in terms of the range of issues addressed, the component of intersectionality and creating its own positive Jai-Veeru sisterhood moment at the climax.

The recreation of ground realities is strikingly spot on, with moral police masquerading as the Panchayat, deciding that an abused woman should go back to her in laws, as that is her true home; then deliberates on the ill effects of TV and cellphones on women’s ‘sanskaar‘; and finally cuts the inaugural ribbon for the TV installed with the Mahila Panchayat’s effort and the womens’ hard-earned money. This films becomes a mirror to the everyday activities of our society, be it urban or rural.

The ingrained ‘values’ fostered by ages of patriarchy, make it impossible for men in the movie to fathom how a woman could be a truck driver, or wear jeans, or travel alone in a bus, or even be educated. The group attending Panchayat meetings neatly segregates itself by gender and we are reminded of primary school seating, feeling appalled at the ridiculousness of this cloistering in any place, come to think of it, be it places of worship or even some college concerts I have attended (yes, I studied in Haryana).

The standards we, as a society, set for our men and women are toxic to both. Be it beauty standards like long hair and youth mandatory for women to feel desirable or that a woman has to prove her femininity by giving birth are rigid definitions that stand in the way of self actualization and autonomy. The movie sheds harsh light on the measures of masculinity inflicted on each other by the men teasing each other about the size and efficiency of their penis, or resting their ego of masculinity on lying to themselves about their fertility, peeing in public to mark their territory and leching at women entertainers at the ‘dance company’.

As one of the female protagonists rightly points out, even all cuss words are directed at sexually abusing women. In a gleeful sequence, the women enjoy modifying these ‘gaalis‘ to ‘betac***’, ‘baapc***’ etc. A powerful dialogue from the movie states “Mard banna chhor, pehle insaan banna seekh le” (“Forget about being a MAN, first try and learn to be human”). In fact, the only male character who untiringly helps the women of the village by enrolling them in various schemes in order to earn a living (played by Sumeet Vyas), is finally beaten up by the local lads unable to digest that a man was helping women in the path of empowerment.

Parched is an extraordinary journey of sisterhood, discovering sexuality, bodily autonomy and freedom. On one hand, the educated woman from North East faces street harassment, and on the other, all the women face physical abuse in some form or the other; all perpetrated by men and boys with fragile concepts of proving their manliness; but what the women do to take charge of their lives is inspiring to say the least. As two mythical men fight out the battle of good and evil on Dassera, the women of Parched rescue each other, triumph over their insecurities and unveil their hair cut short, as a symbol of cutting off all ties that suffocated them. In this world starving for positive stories, Parched is Bollywood’s version of a feminist monsoon.