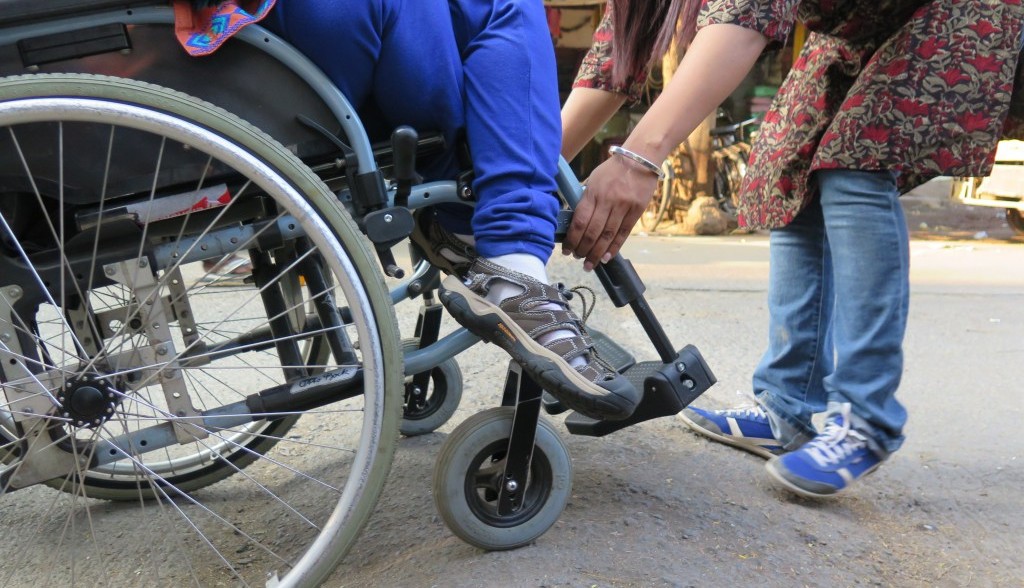 Safecity is participating in the 16 Days of Activism Campaign taking place from 25th November to 10th December, 2015 by facilitating various activities aimed at raising awareness about sexual violence in general and sexual violence in public spaces in particular. This campaign was conducted as a part of the ‘Safecity: 16 Days of Activism against Gender Based Violence’ Campaign.

From the 1st to the 5th of December, Safecity in partnership with Point of View, conducted a campaign called My Access. This campaign sought to examine public spaces not only in relation to safety for women, but also its accessibility for persons with disability. Through this campaign we wanted to understand the links between safety and accessibility, and how public spaces are seen by both women with disabilities as well as without.

On each day one woman with disabilities was partnered with another woman without disabilities on a safety sprawl. A safety sprawl is an exercise where the participant does a safety audit, such as in terms of lighting, of a given area. In this campaign we also included an accessibility audit. The partnered participants later discussed what they observed amongst themselves and shared their experiences as women and as able or disabled women.

On day one, the 1st of December, the safety sprawl was organised with around 20 participants from the National Association of the Blind (NAB) in Worli and 25 students from St. Xaviers, Sophia and Wilson college.

We began with an orientation session which included a meet and greet exercise, where they got to know each other better. That was followed by an exercise discussing when they felt safe, unsafe and precautions they took to stay safe. There were many points of similarities found in the two groups, that is the sighted and non sighted groups. Both felt safe at home or with friends and both felt unsafe outside the home, when alone and in unknown places. Participants from NAB also spoke about feeling unsafe anytime they went outside, and prefer having someone they know around.

After this, the partnered participants were divided into two groups that followed two different routes- one down Abdul Gaffar Khan Marg to a bit beyond  Worli Naka, and the other down the lanes behind NAB towards the police grounds. Some insights from the participants were that there were many obstructions such as  manhole covers, potholes, barricade poles, uneven footpaths and streets, trash, pieces of glass. Sighted participants spoke about  groups of men around tea stalls who were staring at all the girls in an uncomfortable manner. Road crossing was another issue brought up unanimously, leading to a discussion on the possibility of accessible crossing signals, such as audio cues.

After the meet and greet, the safe and unsafe exercise brought similar points as previous day. Non sighted participants also spoke about the importance of their walking cane in relation to their feeling of safety as well as feeling of being unsafe when  asking strange men for help on the road.

Like the previous day 2 routes were followed, both around the bylanes of Lallu Bhai park and near SV road. Issues that hindered accessibility were bad footpaths, parked vehicles making footpaths inaccessible and potholes. Issues of safety were brought up in relation to secluded areas (under the Gokhale Bridge was already considered by a participant as unsafe and this  was reinforced by a man who approached many girls in the group asking them unsolicited questions and even their phone numbers) and groups of men that hung around pan shops (one of whom decided to film the girls without their consent- the video was later deleted).

Day three was a special one since December 3rd was also International Day of Persons with Disabilities. We had around 10 participants from ADAPT (Able Disable All People Together) and 20 participants from Wilson and a few from Sophia College. Since there were more college students, we assigned two to each ADAPT Participant.

After the orientation, two groups went in opposite directions in the by-lanes of K C Marg (Bandra Reclamation). Unlike the previous days, we were looking at accessibility in terms of women in wheelchairs and on crutches. Issues brought to the front were that footpaths and wheelchairs were not accessible to wheelchair users (no ramps to get on the footpaths). Footpaths were also obstructed by garbage, construction materials, vendors and parked vehicles. Uneven roads also made it difficult to manoeuvre a wheelchair. In terms of safety, participants mentioned broken lights and crowded areas. Many said that they wouldn’t travel by these lanes alone, or at night.

After the safety sprawl, we joined the members of ADAPT at carter road for their cultural event celebrating the lives of persons with disabilities.

Day four was the 4th of December, where we had 18 participants from Paraplegic Foundation in Sion (east) and 25 participants from Sophia College. We began our orientation after a short cultural event, attended by Mrs. Earth, Priyanka Khurana Goyal.

Again, like the previous day, accessibility in terms of wheelchair accessibility was examined. Besides uneven roads and inaccessible footpaths, road crossing was seen as a major issue given the short amount of time given to do it. Safety issues such a poor lighting and crowds were also noted. In later discussions, more issues of accessibility were brought up such as public and semi private transport (taxis), and the need to make city spaces, or any public spaces more accessible.

The final day was on the 5th of December, with 20 Participants from Kamala Mehta school for the Blind in Dadar East and 25 from St. Xaviers college. The Orientation included a meet and greet session as well as an activity on what made them feel safe, unsafe and what precautions they took.

The participants, like the previous days, were partnered up and divided into two groups going different routes. One route led to dadar station via Dadasaheb Phalke Marg, whereas the other covered the by-lanes of the other side of the Babasaheb Ambedkar Marg.

Several issues of accessibility came up such as the need for Audio signals while crossing the road, uneven roads and footpaths, parked vehicles blocking routes and crowding already narrow roads and sudden steps and potholes. In terms of safety many felt that there wasn’t enough streetlights, a point also raised by low vision participants, and sometimes trees blocked out streetlights making roads darker. Since that area of Dadar is very crowded, many spoke about feeling unsafe in the crowd but also how people were not concerned and would bump into the non sighted participants. Many stressed the need for civil sense and etiquette amongst the public.

Through these 5 days we learned a lot from our participants, both disabled and non disabled. We learned to widen our approach to safety and accessibility- an accessible space is a safer place for many, and accessibility is not just a concern for persons with disabilities since something like better lighting makes an area more accessible. Through this campaign we also sought to bridge the gap between the the disabled and non-disabled women, through their experiences. We were glad to see friendships brewing throughout this campaign, as well as the understanding that all women had a right to access public spaces without fear of their safety.