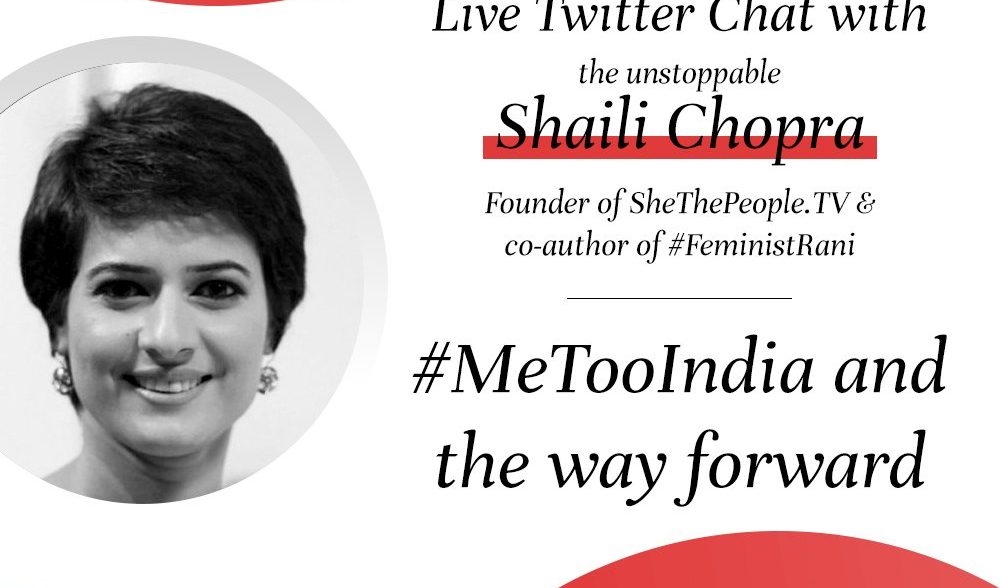 On 2nd Nov 2018, Indian Women Blog @indianwomenblog conducted a tweetchat with Shaili Chopra @shailichopra, the Founder of @SheThePeopleTV about her new book #FeministRani, the recent #MeToo movement in India and the way forward.

The chat began by asking Shaili the new interpretations and understandings that her book #FeministRani was bringing in the moment of the outrage of #MeTooIndia. She was asked her thoughts on which institutional mechanisms/procedures need to be put into implementation as the next step forward for #MeTooIndia and her opinion on the inclusivity of the #MeTooIndia. Indian Women Blog also took into aspect the concept of privilege and what urban India could do to take #MeTooIndia to the rural women and give them that much needed platform to share their stories. They spoke about possible reasons that could be stopping men from voicing their support for the victims and what their silence meant. The conversation also touched upon the issue of women identities in marriage, the effect it had on them, marital rape, domestic abuse and more. Shaili shared her thoughts on reasons why the LGBTQ+ community stayed non-verbal during the #MeTooIndia – and the fears or barriers they face. She also shared her views on the impact of #MeTooIndia on politics from the moral point of view and the conceptual differences about the feminist movements in India and how #MeTooIndia can be instrumental in resolving these issues.

A tweetchat by Indian Women Blog!