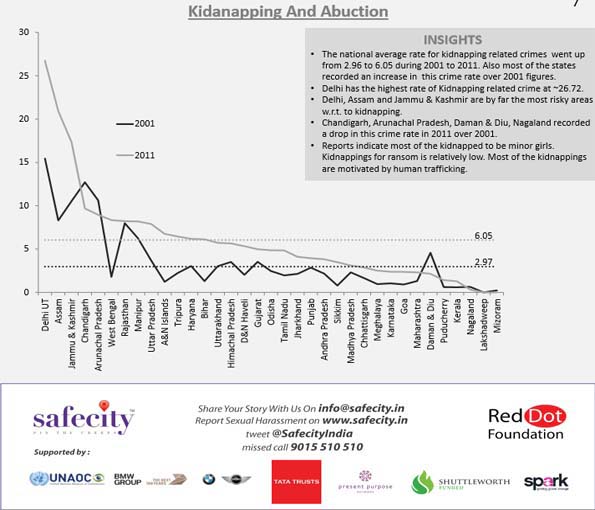 Arshia Taqi is a third year law student at Pravin Gandhi College of Law, Mumbai and is also a trained yoga teacher.

Kidnapping and Abduction: Know Your Rights

Kidnapping is the taking away of a person by force, threat, or deceit, with intent to cause him or her to be detained against his or her will. Kidnapping may be done for ransom or for political or other purposes. Abduction is the criminal act of taking away a person by persuasion, fraud or by open force or violence.

Some of the most important laws to note are:

Section 362 IPC: Abduction; whoever by force compels, or by any deceitful means induces any person to go from any place, is said to abduct that person.

Application of the Law:

Kidnapping from guardianship is a substantive offence under the Code; but abduction is an auxiliary offence, not punishable by itself, but made criminal only when it is done with one or other of the intents specified in Section 364 of the Indian Penal Code.

Force in Section 362 of the IPC means actual force and not merely a show or threat of force. Deceitful means signifies anything intended to mislead another. It includes inducement and its scope is very wide. The intention of the accused, one may say, is a gravamen of the charge. The case of Rabinarayan Das is a pointer in this regard. Here the prosecution was blind. She wanted to go to her school. However, the petitioner took her to secretariat premises. Evidence of inducement is not forthcoming and yet there was nothing to prove that the woman had gone there out of her volition or free will. In another case the two accused and the third person were seen disappearing together. They had drinks and moved away. The one who did not return home, his moustache, torn kurta and a few drops of blood were found by the side of a swollen river. Whether he was pushed, or he slipped could not be known. His companions were not convicted under this section. Where the accused persons, on false pretext of repaying the money to the deceased, induced him to accompany them to a distant place and after killing him, threw the body in a private ravine, their conviction under s. 364 along with sections 300 and 201 was upheld. In Sucha Singh v. State of Punjab, during the period of insurgency, two young Sikh boys were abducted by armed assailants from their house on a dark night in the sight of their parents. They were killed within a short while by the abductors. The abductors were charged with murder. It was held that when more persons than one have abducted the victim, who was later murdered, is within the legal province of the court to justifiably draw a presumption depending on the factual situation that all the abductors are responsible for murder. Section 34 of the Penal code could be invoked for the aid to meet the ends of justice. An abducted victim was murdered later on. It was held that the court can, depending on the factual situation, draw the presumption that the abductors are responsible for the murder. It is their responsibility to explain to the court what they had done with the victim.

However, there is also a unique ‘effect’ of being taken hostage, the ‘Stockholm Syndrome’  which is regarded  as a means of coping and surviving since it certainly enables, on many occasions, hostages to deal with extreme and life-threatening circumstances. The term was first coined by criminologist, Nils Bejerot, to describe the unexpected reactions of hostages both during and after an armed bank raid in Sweden in 1973. It was noted that, despite being subject to a life-threatening situation by the raiders, the hostages (three women and one man) forged positive relationships with their captors even to the point of helping to finance their defence after their being apprehended. Conversely, the hostage-takers began to bond with their captives. This paradoxical reaction has been noted in many other incidents. The 10-year-old girl, Natascha Kampusch, who was held captive for eight years bonded with her abductor to such an extent that, on his suicide immediately after her escape, she blamed the police for his death and clearly grieved his death. It is not clear why some individuals react in this fashion while others do not. Some merely seek to escape.

In conclusion, it may be stated that kidnapping is a categorical crime punishable by law. The Stockholm syndrome is merely an aberration and though the aggrieved party may be sympathetic to the offender, yet, per law, it is an offence. The various provisions of the law may be applied selectively, though, based on varying circumstances which are subjective.