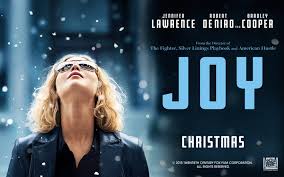 Jennifer Lawrence stars in and as ‘JOY’, based on the true life story of inventor and entrepreneur Joy Mangano. Joy liked inventing and building things since she was a little girl dreaming of adventures in forests and castles. She happily declares that she has a special power- she does not need a prince.

From a young age, just like so many of us, she is conditioned by society and family to believe that having an aim is okay as long as a husband and children are included. Joy puts in immense emotional labor to take care of her family, even her ex-husband, and comes to realise how trapped she is. She does not see a way out of the rut she is stuck in with her family exploiting her, not just emotionally but in business as well. Her very own loved ones almost lead to her downfall by convincing themselves and her that she is not capable enough. Sometimes, parents do play a detrimental role in their child’s life by not trusting their abilities and being remiss in promoting their talents. The toxicity of domestic relationships can have far reaching impact on children, especially if they are targeted at particular gender traits. Her father has no qualms about devaluing her abilities while making profit off her ideas.

Everyone dismisses her business ideas as the outcomes of fantasies of a bored housewife. Even distributors write her off, telling her to “Go home and take care of your family”. But Joy strives on. Even when she is forced to file for bankruptcy, she does not quit. The road to her success does not come easy. At every step she is looked down upon, Joan Rivers (played by her daughter Melissa) even tells her, “You’re never gonna make it in a man’s world dressed like that!” She almost gets laughed out of a sales meeting because the men in the room couldn’t stop making sexual innuendos. This is a situation many modern women may have found themselves in as well, be it the ‘boys club’ in college giggling away, or male office colleagues creating WhatsApp groups to snigger at dirty jokes. But Joy sees only one thing- her goal. She struggles through it all to realise her dreams and build her own fairy tale, without a prince. However, the mature relationship portrayed between Joy and her ex-husband is almost Utopian, as her grandmother observes, “They were… much better friends than they were husband and wife”.

Joy, as a movie, is an ode to an undying belief in oneself, despite the emotional burden women bear, and the prejudices they face. Joy’s true male friends- her ex-husband and her mentor Neil, see her and appreciate her for the marvellous innovations that spring from her mind. For them, it doesn’t matter if she wears a skirt. They see her for who she is- UNBEATABLE.