Meet Us On the Street: International Anti-Street Harassment Week – a program of Stop Street Harassment– is an opportunity to collectively raise awareness that street harassment happens and that it’s not okay.

Why a Week?
Amazing activists and ordinary individuals around the world work hard year-round to make public places safer but once a year we can help amplify each other’s voices and get global mainstream media attention for this issue by collectively speaking out together.

Safecity participated in the Global Anti-Street Harassment Week from 10 – 16 April, 2016. We engaged with people in our online and offline communities through events,workshops & creative campaigns to highlight the issue of Sexual Harassment in Public Spaces.

Here are all the activities that we conducted during #AntiSHWeek :

A photo campaign to engage followers to answer the question –

What is the one aspect that would be present or absent to make your City safer?

Here are some of the many entries that we received and have been sharing:

Safecity participated in Mumbai’s Equal Streets initiative on Sunday, April 10, which also marked the beginning of Meet Us On The Street: International Anti-Street Harassment Week taking the #MySafecity campaign to the streets of Santacruz.

We invited people from all age groups to think about and share with us their ideas of a Safe City through the medium of pavement chalking. We received brilliant responses from people talking about their dreams of an ideal city, where safety is not a concern. 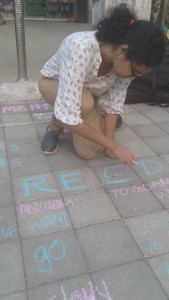 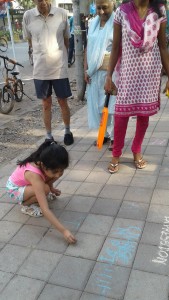 Some girls spoke about the freedom to go anywhere, express themselves and to not have any restrictions. An older woman said that a safe city is where girls roam freely and safely, where there’s no catcalling or staring.

Men also took part, speaking about a city where there is respect and everyone can move freely. Children also took part with great interest, one even spoke about how her safe city is one where the police protects everyone.
It was also added that our safe city would have good lighting and patrolling.

On Sunday, April 17, Safecity was once again a part of the Equal Streets initiative with a Safety Sprawl.
6 students from H.R. Collage, Somaya College, Sophia college and Mithibai College joined us on linking road to do a safety audit of the areas nearby. 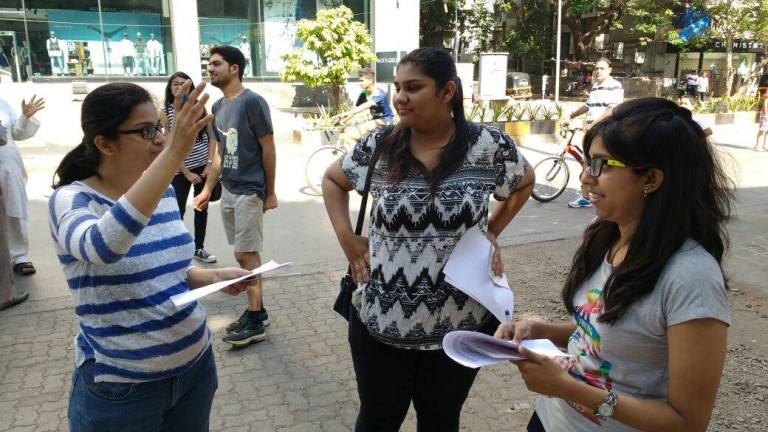 The safety audit included examining the lighting,quality of road and other aspects of the area that may affect its safety. The students also engaged with people occupying the streets, residents of the area and those working around the area.

Besides garbage on the roads, and inaccessibility due to construction, uneven roads and lack of good footpaths, the area was seen as quite safe by the students as well as the people they spoke to. This was credited to the high level of patrolling done by the police in the area and as one person put it- the large number of banks.

At the same time however some respondents did allude to “minor” incidences of sexual harassment such as staring. Some also talked about harassment in public transport like buses and trains.

You can view the all the details of the Safety Sprawl here .

A poster series attempting to create awareness on the laws related to sexual harassment in public spaces. 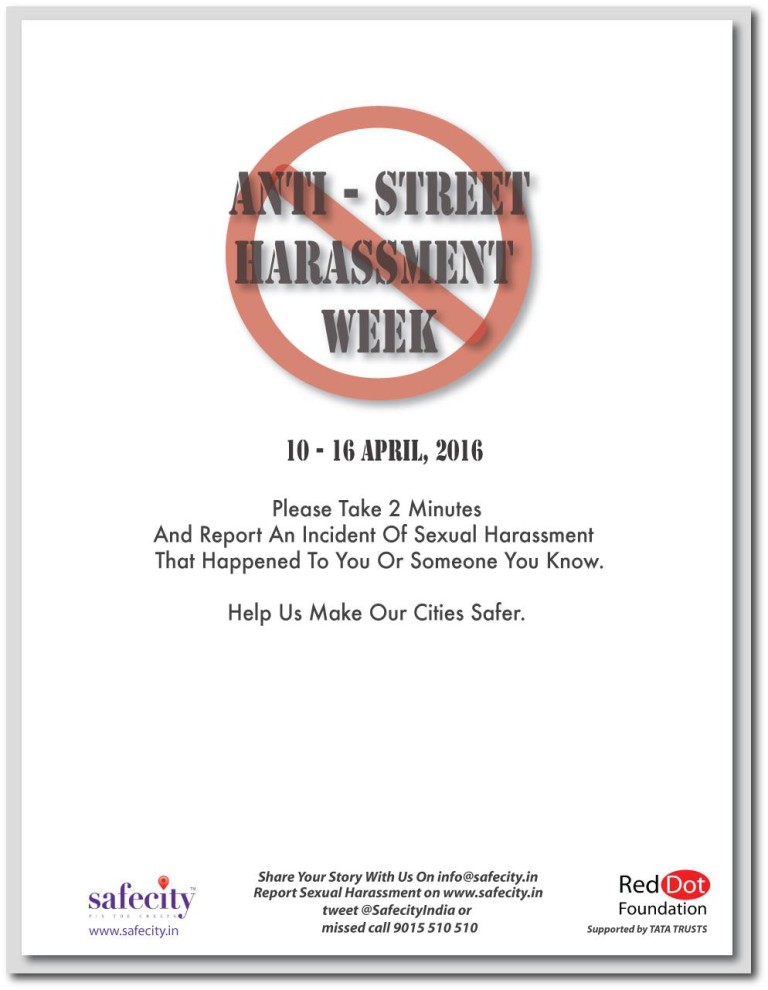 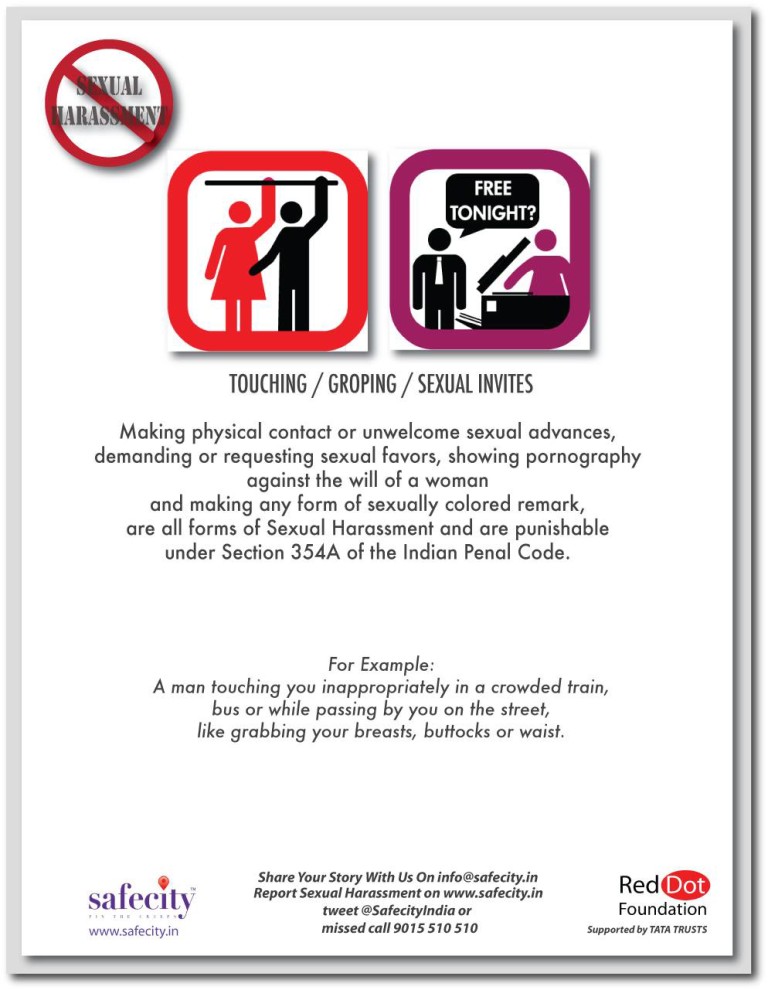 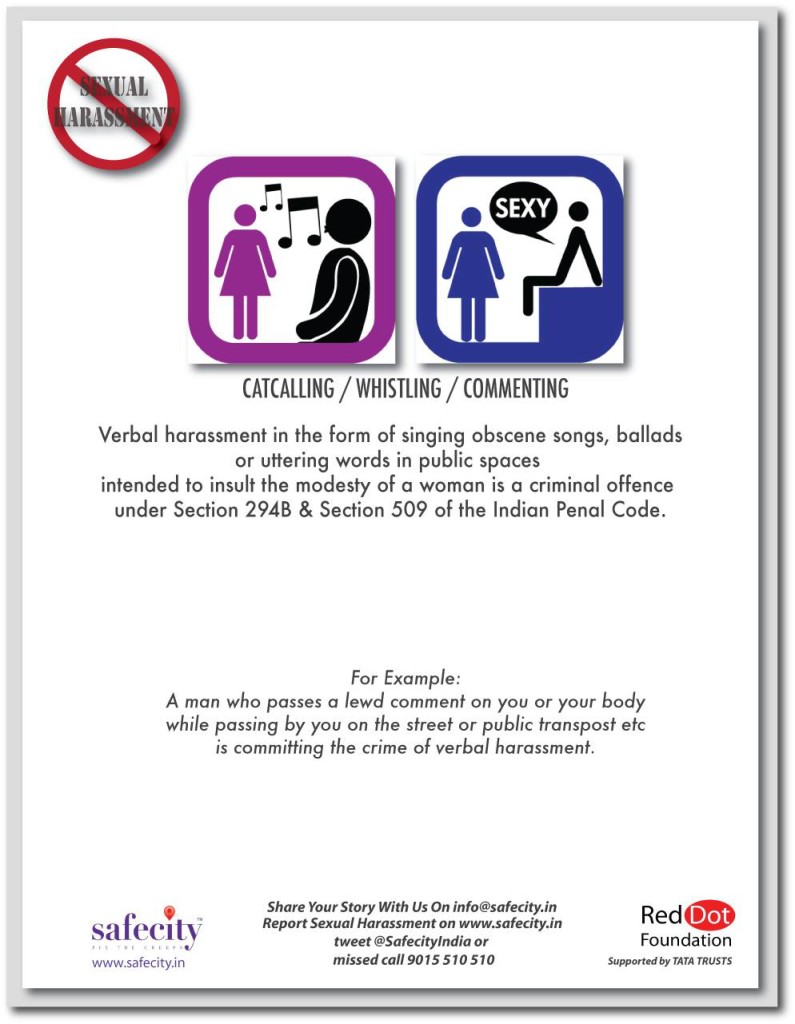 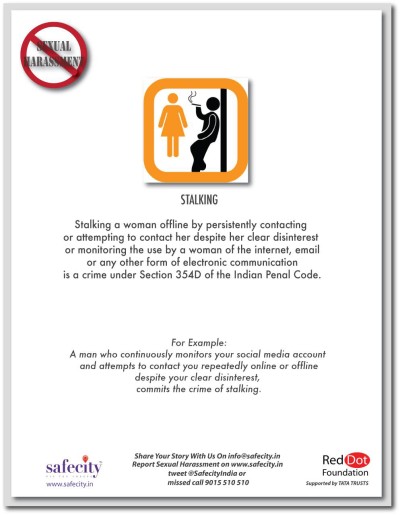 Do we all have easy, uninhibited and safe access to public spaces? Do we all perceive these spaces similarly? Is it that girls and women experience spaces differently when it comes to safety and mobility? Do we find ourselves in spaces which tend to look that they are dominated by a particular gender?

After a series of discussions and campaign activities, seen here are Anjali and Sahil of Sanjay Camp who came together with other girls and boys of their neighborhood to paint a mural on equal access to public spaces and opportunities. Girls spoke of their restricted choices and options when they step out of their houses and boys spoke of how that wasn’t a concern until they heard the girls talk about it. They are looking to change this together. This mural is part of their efforts for the ongoing International anti street harassment week. 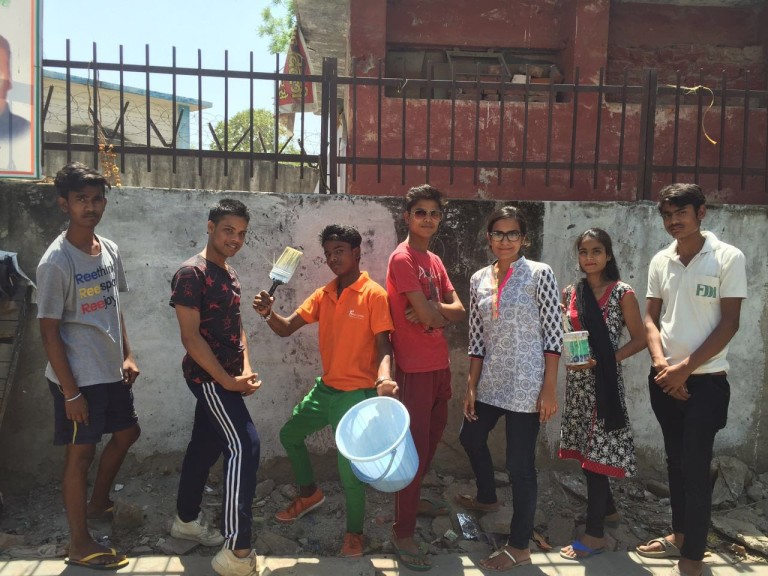 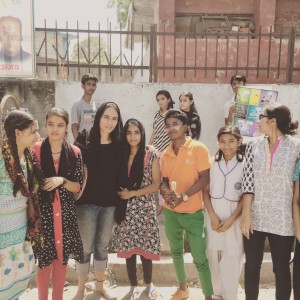 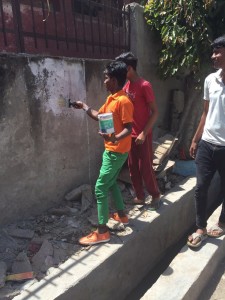 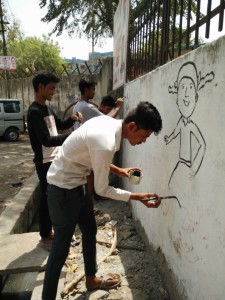 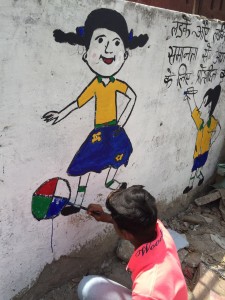 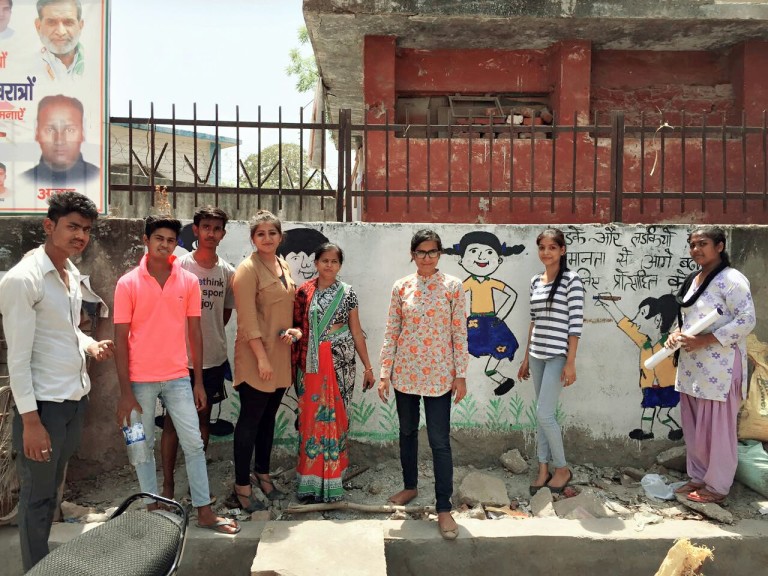 On the April 13, 2016, 35 girls from the community of Indira Nagar occupied a space generally used by boys to play a few matches of Kabaddi.

During our campaign with Vacha, several girls of Indira Nagar spoke about feeling unsafe in Karkare Garden- an open space located near their community. When discussed further, girls opened up about how they do not feel welcome there, and how it is mostly populated by boys. After dark, many girls also spoke about experiencing harassment in the area.

Before going to the garden, we had a short orientation of the reason of this activity. Most of the girls spoke of the importance of sport for health and to build confidence. The discussion lead to how girls are not encouraged to play outside- they are often limited to school grounds or at the most the lanes near their house. Formal sports are also many a times out of reach for girls. The reasons they gave ranged from not having enough time from housework, to it not being allowed by family. During this discussion we also talked about how men playing sports are given much more importance than women playing the same sport (citing examples of the lack of attention given to the women’s cricket world cup that happened recently) and save for a few many sports women do not get the recognition they deserve. 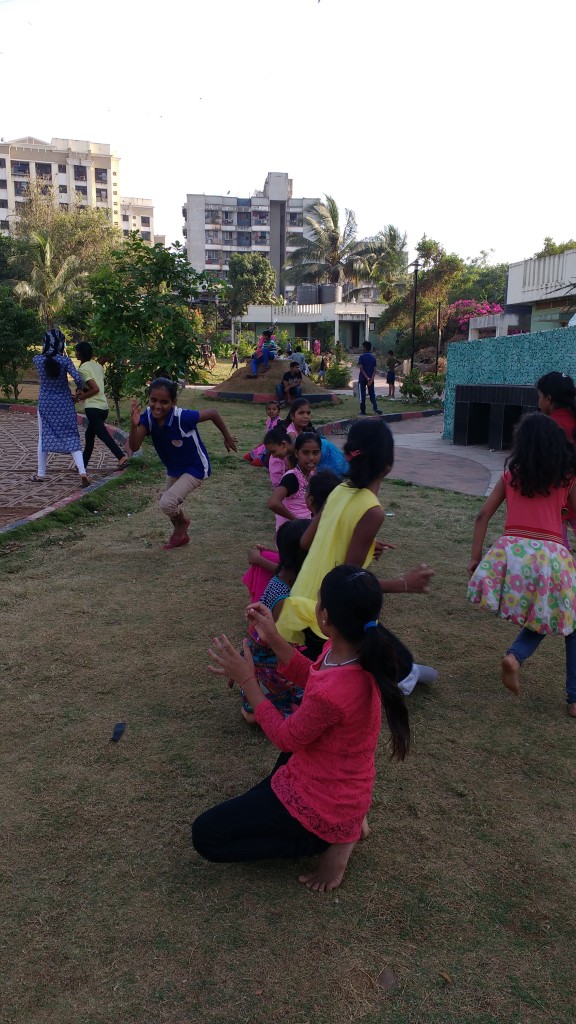 After the game we talked to the girls some more, and asked them how they felt about today. One girl spoke about an increase in confidence- she didn’t think she could play Kabaddi before, but after playing she sees herself as a pretty decent player.Other girls spoke about how fun it was to be playing in a large group. We then asked the girls if they would come here again, on their own,to play a game- to which all the girls gave a loud and confident yes!

On the 16th of April, the last day of the Anti- Street Harassment week, 13 girls from Bandra Plot occupied a space generally used by boys.

During our campaign with the girls of Bandra Plot, it became clear that the girls did not access many public spaces for a variety of reasons- one being the fear of harassment. This is especially the case when it comes to open grounds or gardens, which are primarily occupied by boys and men.

Men occupying public spaces itself may not make a space unsafe, however the lack of women in a space points to the fact that women do not see these spaces as accessible- not to mention that many girls have experienced sexual harassment there.

Through sport and games Safecity, along with Vacha Trust, decided to make girls visible in the Highway Municipal garden in Jogeshwari East. It is a small garden. There were only boys playing there when we arrived.

The girls then divided themselves into teams and began an engaging game of Kabaddi. Slowly some of the younger boys came to watch and cheer for the girls. After two rounds, when the girls were deciding between playing Kho-Kho or something else, the boys asked whether they could join in as well.

It was interesting to see that these boys had no issue playing with the girls, and in fact had liked the way they were playing. We had a short discussion with them as well, about girls playing in gardens. They were happy to see girls playing here,as that never happens. When asked why, the boys said that older boys sometimes harass the girls, making the area unsafe for them. The discussion ended with them offering their full support to girls who wish to access public spaces.
These boys were happy to see the girls at the playground and cheered them on! 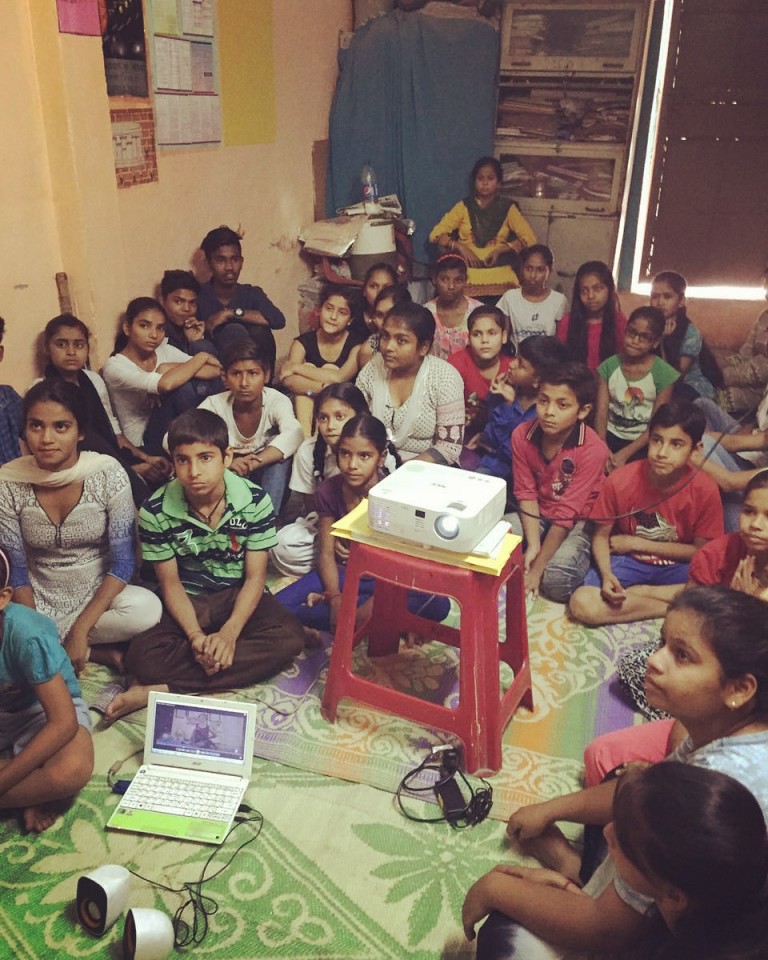 On a hot Saturday afternoon, 40 children from two neighborhoods of Delhi where Safecity is working with Action India – Sanjay Camp and Dakshinpuri came together for the screening of a film on understanding gender roles.

We took this opportunity to reconsider these roles, norms and conventions we are subjected to, sometimes without a choice,with these young ones as part of the International anti-street harassment week. Amid laughter, giggles, shy glances, and many conversations later, they opened up to discussing how when we are made to conform to socially defined roles and expectations, we somewhere let violence grow. In silences, subjugation, rebellion and acceptance, we give air to these gender roles which only strengthen gender inequality. The film aimed at exploring, questioning,understanding and redefining the normative gender roles we seem to get assigned to by the social dynamics that play around us. The attendees questioned these stereotypes and shared how they experience these too. We asked them – if these conventional roles were swapped, how would they feel? Most boys were terrified at the thought of it. In today’s world, it brings them liberties and freedom they could not have imagined had they been girls. The girls spoke of the many restrictions they face, the several opportunities that they have lost or never had a chance at, and the many they will continue to lose if things did not change.

The film screening was just one of the many tools of understanding how inequality affects every facet of our life, the opportunities we have access to, the things we can and cannot do and it brings with it despair, violence, sadness, fear and so much more. It was heartwarming to see the entire group surge with the energy of willingness to do something about it, to at least talk about it and to at least take small steps towards the change they want to be a part of.
Our weekend was full of insights, planning for next steps on our campaign, and a great opportunity was seen in two different neighborhoods coming together to share their experiences, the issues that affected them and how they’re solving a few of them with our campaigns focused on addressing street harassment. These two neighborhoods, though right next to each other geographically, are different in many ways and the young ones spent this afternoon talking of similarities and learning about each other’s lives which they seldom have the opportunity to do so otherwise. In sharing, we saw them caring for each other. Can so much happen through just a film screening? It can.

Digital Empowerment Foundation (DEF) and Safecity collaborated on an online campaign to raise awareness on street harassment and the legislation against. Facebook and Twitter was abuzz with several interesting conversations and informative posts being shared by these organizations and others who participated alongside. Read more about this campaign here.

Our amazing Twitter Curator,Vandita Morarka @vanditamorarka,held a TweetChat during #AntiSHWeek on Street Sexual Harassment with respect to the Indian Subcontinent. What ensued was a passionate exchange of views & solutions. Here is the whole TweetChat!

This was our earnest way of trying to end Street Sexual Harassment and we are still at it. What are you going to do in your everyday life to help end it? Write to us on info@reddotfoundation.org. You can also follow us on facebook and twitter!