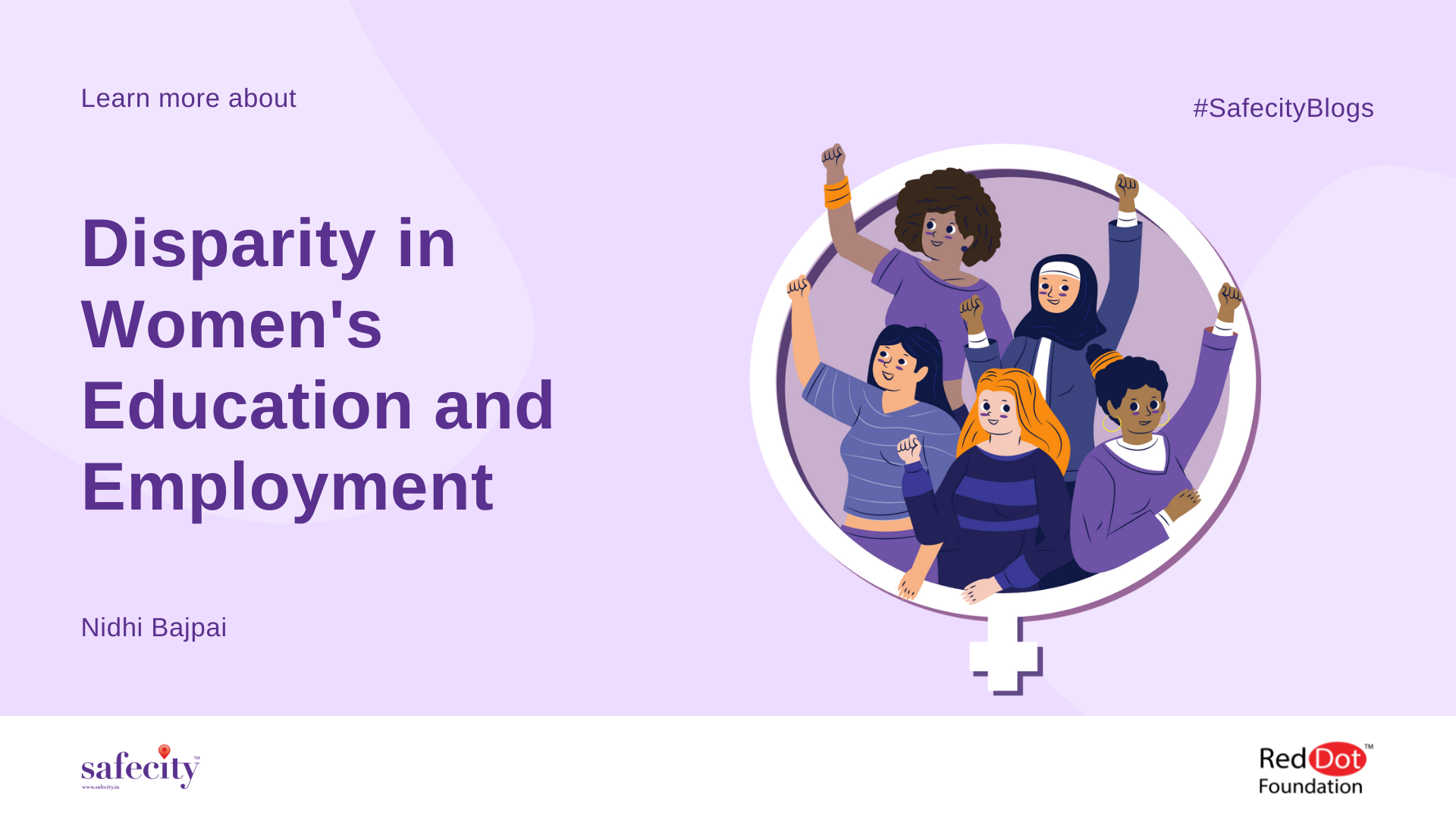 India is one of the largest and fastest-growing economies in the world. At least that’s what we hear and say! And according to The World Bank data, India has seen an ever declining female labour force participation in the past two decades. The female workforce participation rate in India had tripped down to 20.3% in 2019 from more than 26% in 2005, in comparison with 30.5% and 33.7% in neighbouring countries like Bangladesh and Sri Lanka respectively as per the World Bank estimates. Only one-fifth of the female Indian population was composed in the workforce in 2019, which is one of the lowest globally.

But at the very same time, India has seen commendable improvements in gender parity in education, higher literacy rates and toppled fertility rates. Gender Parity Index (GPI) in higher education in 2019-20 is 1.01 against 1.00 in 2018-19, and in 2020, fertility rate for India was 2.2 births per woman, falling gradually from 3.3 births per woman in 2000. Thus the bewildering question arises, if the gender analogy in education is as balanced as it has ever been, women are more literate, the fertility rates have toppled to the lowest in India’s history, then why are women still pulled back from the workforce? There are, unquestionably, more factors at play that are staging women’s economic participation. It must be understood that even though social norms partially affect female labour force participation (FLFP), challenging and attenuating them will definitely give a good push to the women workforce. The transformation of well-rooted social stereotypical norms will require continuous strategic action plans.

Obligated to child care
Even with much progress in education and awareness, stereotypical thought that puts the obligation of child care on the woman rules social spheres including workstations. Absence of childcare facilities and proper creche facilities make it taxing for women to join the labour force when social norms mandate that it’s their primary responsibility to look after children. Women who have at least one child under the age of six have lower participation in the workforce as compared to women with no children as per World Bank’s 2017 working paper on motherhood and female employment in India.

Low pay jobs
Meanwhile, the gender pay gap stood at 19% on average and has increased from 2017 when it was 15%. With education qualifications as well, women instead of going for low paying jobs, choose to remain out of the labour force altogether. Because working for such an unjustified salary and with the outer world pressure, they feel overwhelmingly overburdened.

Husband’s finances are good enough to run a household
According to research by Coffey et al 2018, 50% of adults living in India believed that a married woman should not be working outside the home if her husband earns a decent living. It is also interesting that such mentality is “more binding” among wealthier households, which explains the low female labour force participation (FLFP) in India. Female participation rates declined from 34.1 per cent in 1999-2000 to 27.2 percent in 2011-12. Thus, it is  predictable that according to the Time Use Survey 2019, females spent 16.9% of their time for unpaid domestic services and only 4.2% on paid employment compared to men who spent 18.3% of their time on paid employment itself.

Working women and unstable finances are proportional
With exceptionally increased literacy in women, 84.8% in 2016, 85.3% in 2017 and 87% in 2018 and with the household responsibilities imminently falling on them, their employment is seen only as a necessity at the time of financial dent in household income. Women’s employment isn’t considered as one of the pillars one must have to live a life.

Another important scenario noticed nowadays, according to an article by the University of British Columbia, is that educated women are getting married to more educated men who earn higher incomes. When the household income increases and the reliance on the women’s earnings plummets it spurs women to drop out of the labour force and focus on their “status production”. Families and caste groups gain status by a woman’s blockade from the labour market, except in cases of white-collar governmental jobs, which are considered highly respectful and thus, receive family support.

Workplace security concerns
Another reason for women suffering lies in sexual harassment and abuse that they have to face in their workspace. In 2019, 505 cases of “Insult to modesty of women at the workplace or in office premises” were recorded by the National Crime Records Bureau (NCRB), but the actual number of incidents is likely much higher, underreported due to multiple reasons. A study by Federation of Indian Chambers of Commerce and Industry (FICCI) and EY found that 36% of Indian companies and 25% of MNCs were not compliant with the Sexual Harassment Act 2013. To make the situation better we need to take some measures, like social security should directly be ensured to workers, migrant women must be provided with safe and secure infrastructure to work at, and workplaces must strictly adhere to the Sexual Harassment of Women at Workplace (Prevention, Prohibition and Redressal) Act 2013. This might not accelerate the women workforce but definitely will help fight against the actual issue.

As women stay within lines engraved by our very own society, their accessibility to bank accounts and mobile phones is supplanted by their unspoken ‘homemaker’ duties! As per National Family Health Survey (NFHS) 5 ( 2019-21) published data, women having mobile phones that they use themselves is 69.4% for urban women and 46.6% for rural women. Add on women having bank accounts that they use themselves is 78.6 % on an average. Most women depend on their families or communities for information about employment and entrepreneurship opportunities they might have. About 55 percent (in Mumbai) to 80 percent (in NCR) of women and girls report that lack of information is one of the barriers they face in seeking employment that aligns with their aspirations. Such situations limit women’s network size.

And above all the written and well-versed conditions and norms we deal with everyday, restrictions on women’s mobility cannot be sub-lined.

According to the National Family and Health Survey (2019-21), around 12% of surveyed women do not participate in decisions regarding their own healthcare or household purchases. For 17% of women, their employment decisions are made by their husbands.

Statistics of NFHS 2019-21 say that only 25% of women who worked in the past 12 months got paid in cash; it hasn’t improved from the previous year(2018-19) which landed around 24.6%. When curbing women is the norm, it is challenging to increase their participation in the workforce.

Amid all this chaos women fought against societal norms and flourished. One such story is of Maya Vishwakarma. She fought against taboo and stigma around menstruation that has been affecting society for quite long and actually not only worked for a social cause but also provided employment to a number of women through her own NGO Sukarma Foundation, which educates women on menstruation hygiene and has a manufacturing unit of sanitary pads. Women like her are an asset to society. Maya did some sincere work for society amounting to social and economic security for women.

Another inspiring story is of Gujarati fame, Pabiben Rabari, founder of one of the first women artisan enterprises in the country. Pabiben Rabari stands as a true brand ambassador of the colourful Kutch district. With the aim of expanding the tribal legacy of Rabari embroidery, she joined a Rabari women’s group and ended up crafting unique styles of embroidery, including Hari Jari and Pabi Jari. Currently, her eponymous business based in Kukadsar employs over 60 women making more than 25 designs, and her website is quite popular across the world.

And not forgetting, Lakshmi Menon, who founded in 2012, Pure Living (Products Upcycled, Recycled and Economised) offering an eco-friendly alternative to plastic pens and wooden pencils that grow into trees when they are disposed of. The venture has helped empower the elderly and differently-abled women in the region and uses upcycled paper waste from printing presses to manufacture pens.

We need to keep making efforts and paving paths for equality and fighting against social norms and typical mindsets to make this world a better place for everyone.