Naina Jha conducted a workshop on ‘Puberty and Sexual Harassment’ at Government Girls High School on September 9. It was attended by 24 girls. 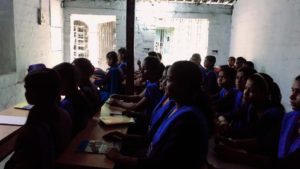 The workshop began by asking the students a sensitive and taboo question of how their bodies have changed over the years? What came in response was silence. The students were feeling very shy to speak about it since it was the first time when someone asked them this question. Therefore, Naina made the students feel safe and comfortable. She motivated them to speak. The answers received then, included an increase in the size of different parts of the body, periods, etc. After discussing various bodily changes, the girls were informed about the various psychological changes that take place during puberty. The discussion then turned towards debunking the myths attached to periods.

Lastly, the girls were asked to share their experiences. One girl shared that she filed an FIR against a boy who often harasses her, but no step has been taken against him. Her parents complained to the boy’s parents but that hasn’t been fruitful either. The boy continues to harass her every now and then. Another girl shared that once she was molested during Durga Pooja and since then she doesn’t go out during Pooja at all. What’s noteworthy is the girls felt happy to talk about these topics because no one had ever conversed with them about the same. This indicates that we need to have a dialogue with every child so that they feel safe.

Thank you Trupti. We will continue conducting such workshops and posting such articles.