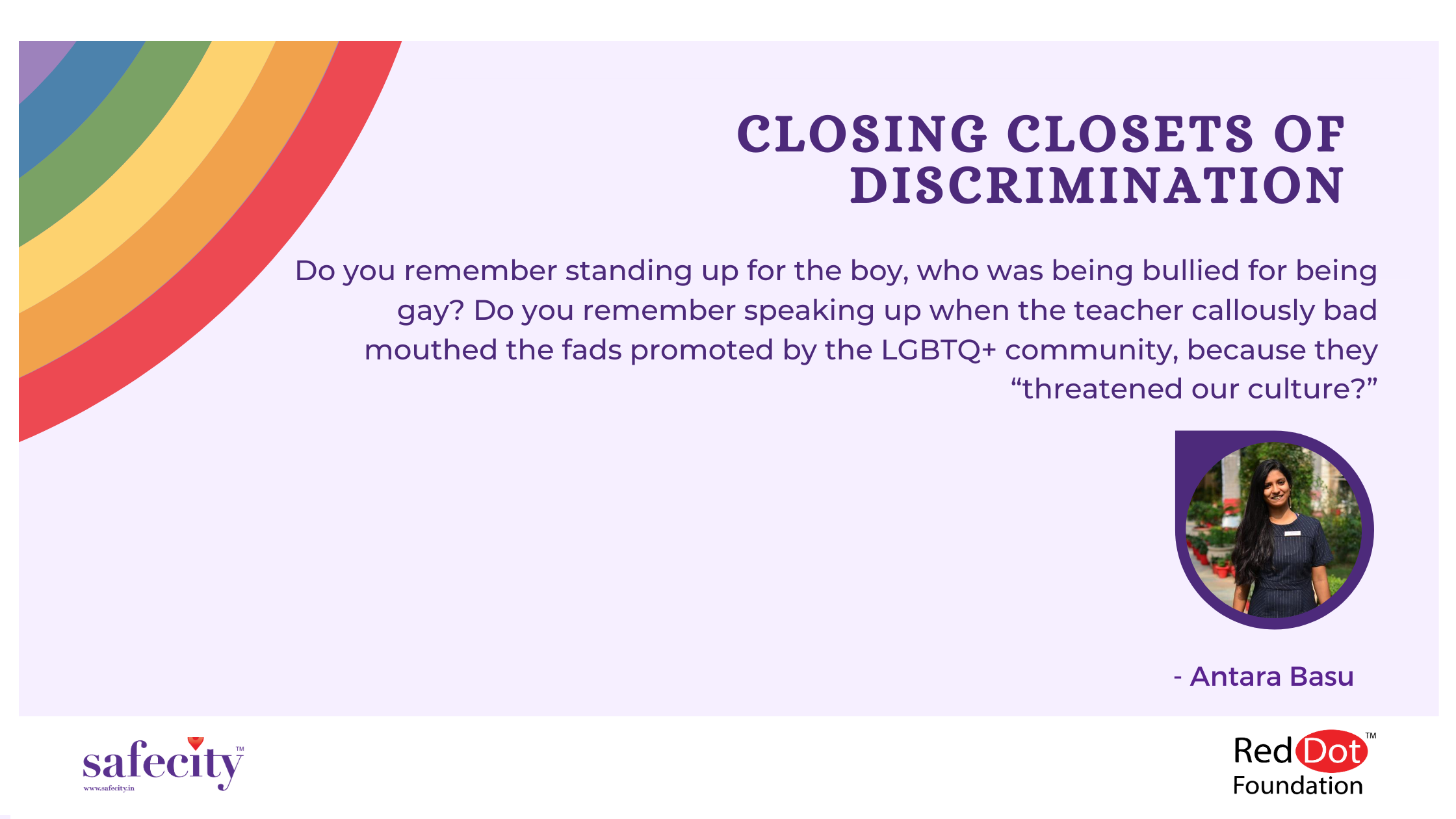 Do you remember standing up for the boy, who was being bullied for being gay? Do you remember speaking up when the teacher callously bad mouthed the fads promoted by the LGBTQ+ community, because they “threatened our culture?” Do you remember defending the girl who told you about her first crush, when your friends laughed at demeaning jokes directed at lesbians.

You don’t, because it never happened. Every time you wanted to speak up, the words remained stuck in a net, fearing ridicule, embarrassment and strange looks.

In a survey of almost 400 LGBT+ youth in Tamil Nadu by the United Nations’ cultural agency, UNESCO, more than half skipped classes to avoid bullying, while a third dropped out of school altogether.

And that is why we direly need Gay-Straight Alliances and LGBTQ+ sensitization in high schools across India.

One of the most heart-breaking realities of the society we live in is that the same teachers, educationists and counsellors who ought to be working to create a security blanket, turn out to be the rips threatening to tear it apart. Can we even begin to comprehend the fear of always having to watch out for insensitive fools, who seem to take pleasure out of tormenting others on the basis of their sexual orientation, or a gender that they identify with. In a country where schools don’t even incorporate comprehensive sex education, discussing sex and gender, non-conforming to traditional notions of femininity and masculinity seems like a huge leap. A country which educates its youth on a foundation of how biological processes are taboo and against Indian traditions, natural issues that might corrupt our Indian values, a reform seems like a giant step. And sometimes I wonder if our flawed core system is strong enough to handle such reforms.

Something I’ve never been able to grasp in my 13 years of education is, does living in denial closet the problems so clearly in front of us? Can we deny the existence of LGBTQ+ students, can we deny the bullying they have to encounter, or the dropout rates that keep rising amongst the community? Or is our education system so wrapped in the pride of our Indian culture that it chooses to exist in the utopia of its concocted perfection.

How can we even begin to assume that in the interconnected society we live in today, such issues relating to the LGBTQ+ don’t reach the technology enthusiastic youth. But the way it reaches them through varied means can have a large and mostly adverse impact. Many of them grow up to be bigoted, steeped in the orthodoxy that seems to have in its clutches most people today. Many turn to become the abusers when really, we should be speaking up for solidarity, standing up for equality and defending dignity.

Creating a GSA in the school, but punishing all those who stand up for their LGBTQ+ counterparts isn’t going to support the solution.

The need isn’t for simple creation of GSA’s, but actually according to them, what is necessary is enough freedom, enough flexibility so that students are confident to speak out against prejudice and demeaning remarks without the fear of ill-intentioned consequences. The need is to create a generation by educating them on these important issues, to provide them with a fresh perspective, a clear outlook, not clouded by years of judgement and homophobia.

By promoting the creation of GSA’s in schools, by initiating conversations about the community, by conducting LGBTQ sensitisation workshops, we take a step forwards towards creating a safer space for our LGBTQ youth. To empower students to fight against bias, and start diminishing the sexual orientation discrimination against students should be our priority.