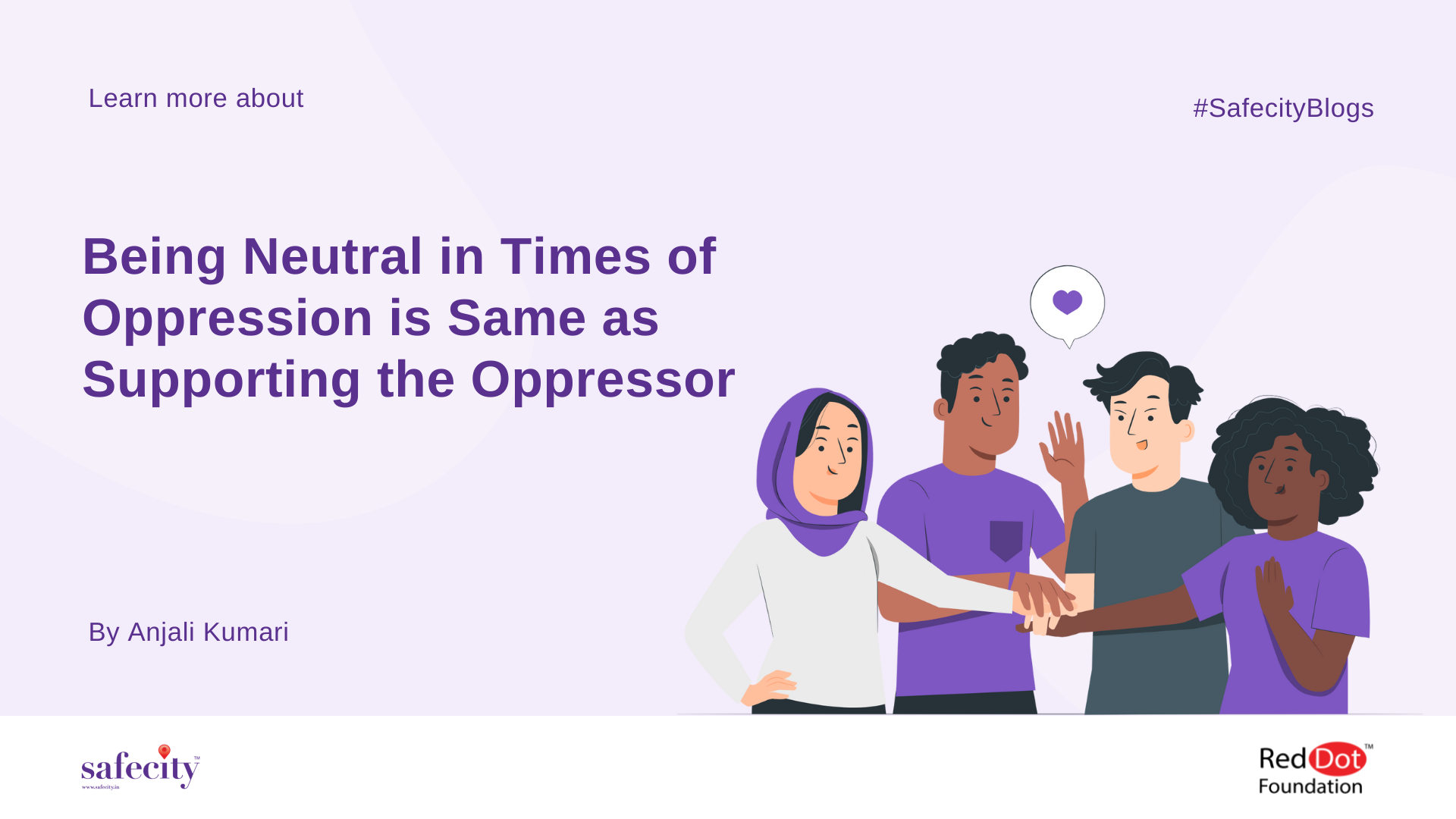 Archbishop Desmond Tutu once stated, “If you are neutral in situations of injustice, you have chosen the side of the oppressor”. There is no clear definition of oppression given by scholars, but according to the Social Work Dictionary, “oppression is the social act of placing severe restrictions on an individual group or institution”, thus implying the existence of a rigid hierarchy. Oppression means to weigh someone down. One’s sense of self might alter because of an oppressive relationship.

Nowadays, it has become common for us to witness the signs or events of oppression. The real question is how many of us acknowledge and talk about it. Many of us dismiss certain news by insinuating ‘it’s their problem’. Audre Lorde in her essay, ‘Poetry makes something happen’ highlights how we are being paid to become poisonous creatures of comfort, we are living in our false securities, and we are fine with everything as long as “the knock at midnight will always be on somebody else’s door”. The attitude of not caring for oppressed people reveals what we have become as human beings.

We are familiar with daily violence, based on religion, caste, race, class, gender, sexuality, etc. Humans have formed hierarchical systems everywhere. 12 Years A Slave (2013) is a film that talks about the oppression faced by black people at the hands of white folx. One of the characters, Bass, asks an important question regarding discrimination, “I’m only asking, in the eyes of God, what is the difference?” He spoke out against the unfair law, and how people conform to it without questioning it. It is asinine for anyone to consider any race inferior.

The 2020 incident in the United States, which sparked the Black Lives Matter Movement after the death of George Floyd, a 46-year-old black man, came to light after a video started circulating online, showing a police officer holding his knee on George Floyd’s neck, as he begged to be released. People from the community started the social media campaign with slogans such as “enough is enough”. The phrase “White silence is violence”, also has been popularized to make the white community realize that racism is also a ‘white problem’.

In India, casteism is one of the biggest challenges. It is not that different from the racism the black community is subjected to. Both are part of the marginalized section in their respective countries, they are continuously being oppressed by people occupying the upper rungs in the social hierarchy. Oppressor caste people in India have used caste for centuries against oppressed caste folx. Their formed behavior towards anyone is determined by the person’s caste. Such inequalities and discriminative practices normalize caste-based violence. Despite a 1989 law in India to prevent atrocities against marginalised caste communities, according to National Crime Records Bureau’s recent data, there were reports of an average of ten women from the oppressed caste being raped every day.

Religious minorities also face institutional oppression in India. In the wake of terror attacks, certain religious groups have increasingly faced profiling, forced encounters, or false accusations repeatedly by the state, especially after the introduction of the Unlawful Activities Prevention Act (UAPA) in India. The state has snatched their rights to even speak for themselves. In most countries, because they belong to vulnerable sections of the society, women are major targets and women from religious minorities face multiple layers of marginalisation. Bilkis Bano case is one of the supreme examples; Muslim women were gang raped and Bilkis’ family was murdered, yet the court freed the 11 men who were convicted in this case of 2002 under the Gujarat government remission policy. However, very few people have decided to protest while a majority are either blissfully unaware or have decided to sweep it under the rug.

Standing up against violence and discrimination, and advocating for human rights is our collective responsibility because human rights are non-negotiable. However, many choose to be ‘neutral’ or ‘apolitical’, but such a stance comes from a place of privilege too. Those who are being oppressed, discriminated against, harassed, and facing the brunt of violence can not afford to stay silent, as doing so only strengthens the oppressor. Being ‘neutral’ and ‘apolitical’ does not come with a low price; a UCLA study has found that discrimination increases risk of mental health challenges. According to the study, 75 percent of all lifetime mental health disorders start by age 24, and in our society, we are constantly surrounded by discrimination related to racism, sexism, or other cases.

The lack of representation and engagement of oppressed people in decision-making processes is another challenge that we need to overcome. Most policymakers and legislators do not understand the plight of marginalized sections as they lack the lived experiences and oppressed folx are often pushed to the margins where their voice is not heard or conveniently ignored. The introduction of schemes aimed at uplifting the people from oppressed communities whilst involving members of the community as stakeholders can help empower them.

The State has some programmes such as the Sukanya Samriddhi Yojana that aim to cover the expense of the education of the girl child from marginalized communities. The minimum deposit starts at 250 Indian rupees and should not exceed 1.5 lakh within a financial year. Partial withdrawal is only permitted after the girl child attains 18 years of age. This yojana has a lock-in period of 21 years so that parents do not use these funds for their benefit. The scheme can benefit many rural and urban families in the long run, especially the girl child. Nai Manzil scheme is another scheme to uplift the youth belonging to the minority communities, who could not finish their formal schooling. It particularly had a powerful impact on young women who got married early. But schemes such as post-matric scholarship, Maulana Azad National Fellowship Scheme, and Begum Hazrat Mahal National Scholarship scheme’s beneficiaries have declined over the years, one of the reasons is improper allotment of funds. This means the establishment of schemes is not enough, we need to keep an eye on its proper implementation.

As we grapple with these issues in our countries, there’s an urgent need to address them at a larger level. We cannot always stand quietly by playing the figurative violin as Rome burns. Remaining silent or being neutral perpetuates violence against the marginalized.