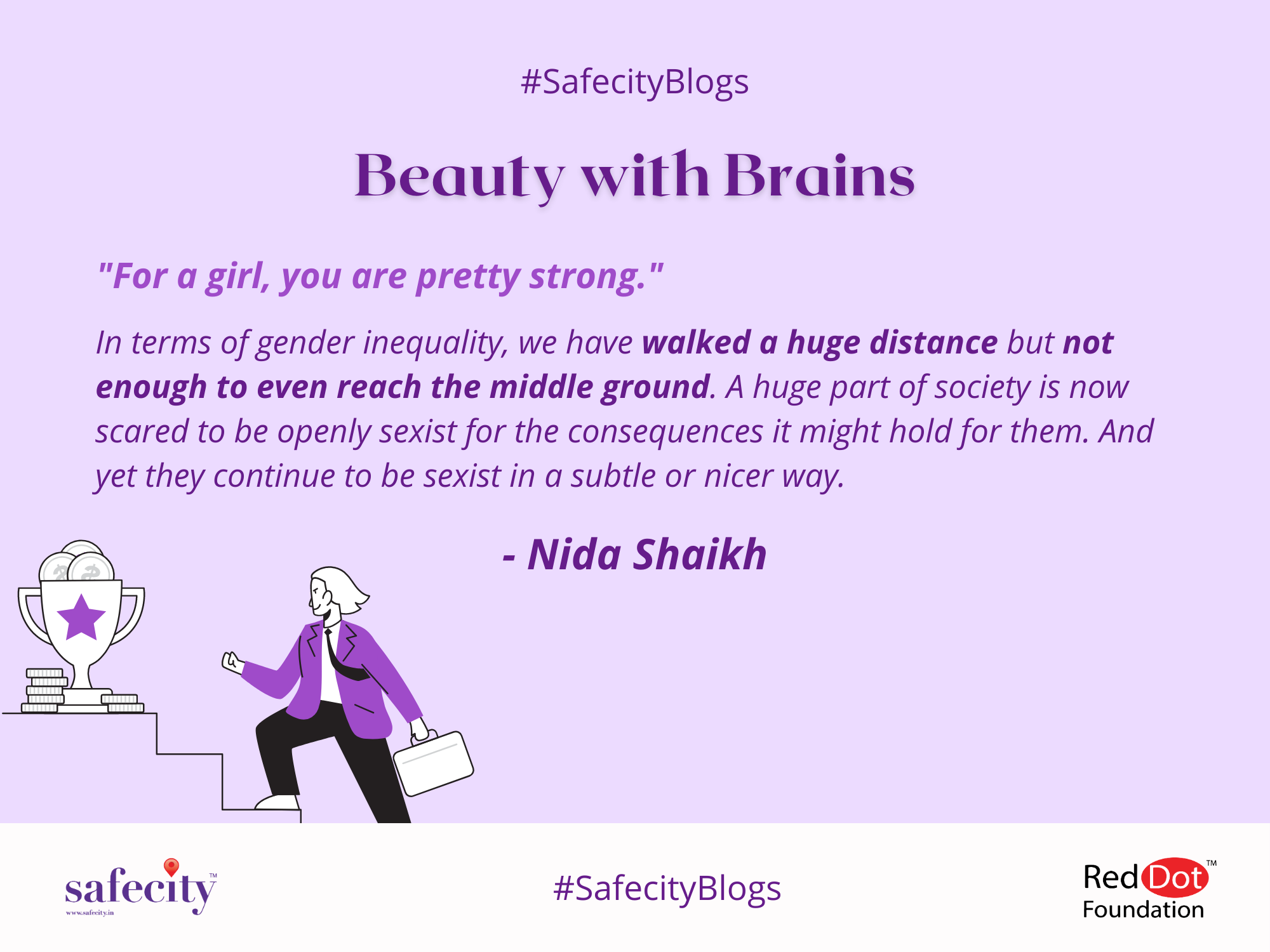 Finance & Women, Safecity, Safecity Blogs
Comments are off for this post

Nida Shaikh is a self-proclaimed feminist and a writer who wants to stay on the right side of history. Pursuing her passion for writing, she has taken up English Literature hoping that somehow she helps society to be better than what it has always been.

“For a girl, you are pretty strong.”

Ever received a compliment and yet it felt like something was wrong? This is a form of sexism that comes under Benevolent Sexism.

What is Benevolent Sexism you ask? If put into simple words, this sexism is displayed by people who perceive women as a weaker section and believe they need to be protected. It includes every kind of sexist behaviour that society makes us believe is positive, nice and right.

In terms of gender inequality we have walked a huge distance but not enough to even reach the middle ground. The privileged part of society is now scared to be openly sexist for the consequences it might hold for them. And yet they continue to be sexist in a subtle or nicer way.

I remember when I was taught that picking up dishes after dinner is my duty but my brother was applauded for picking up his own plate, which is literally the bare minimum of what any human should do. The little instances of sexism at home that are easily passed off, the ones that irritate you and yet you have no idea why, the ones that you were taught to accept, the ones that come off as positive are all a part of benevolence sexism.

For all my life I have heard ‘beti bachao’ as if that was the problem. Why didn’t someone tell them that a girl needed protection because you taught your boys it’s easy to harm them. You called us someone’s daughter, mother, sister, wife. But you forgot that we are someone.

Doesn’t it sound nice when your grandpa tells you how grandma would cook for him as he worked day and night. How he could have never gotten where he is without her help. The romanticizing of a woman’s sacrifice. Haven’t you all been in awe of how Naina, Tara and Heer healed the very broken Ranbir Kapoor. Like all women are meant for is to hold the broken pieces of men together even if it means breaking themselves apart.

Try to remember all your praises for the progressive women in your life. It’d always be along the lines of how she managed to be successful while managing her family. Now wouldn’t the same praise sound fundamentally wrong if it was for a man?

But why is this a problem? If it is seemingly positive and nice.

It’s 2021, and privileged people have formed a notion that sexism isn’t a real problem anymore. Even though we have walked away from problems like sati in India, we are still dealing with foeticide killing, child marriage, illiteracy in women, dowry and so much more. When these problems exist how can something like benevolence sexism won’t. And how can someone invalidate someone else’s experiences, when I and so many like me experience this casual, nice experience on a daily basis. Benevolent sexism may seem so harmless but so does a serial killer until it attacks you. I mean imagine being denied paternity leave because a company feels women are better candidates to stay at home.

2 comments on “Beauty with Brains”

This is such an interesting article to read.
am really impressed by this article.

This is such an interesting article to read.
am really happy about it.