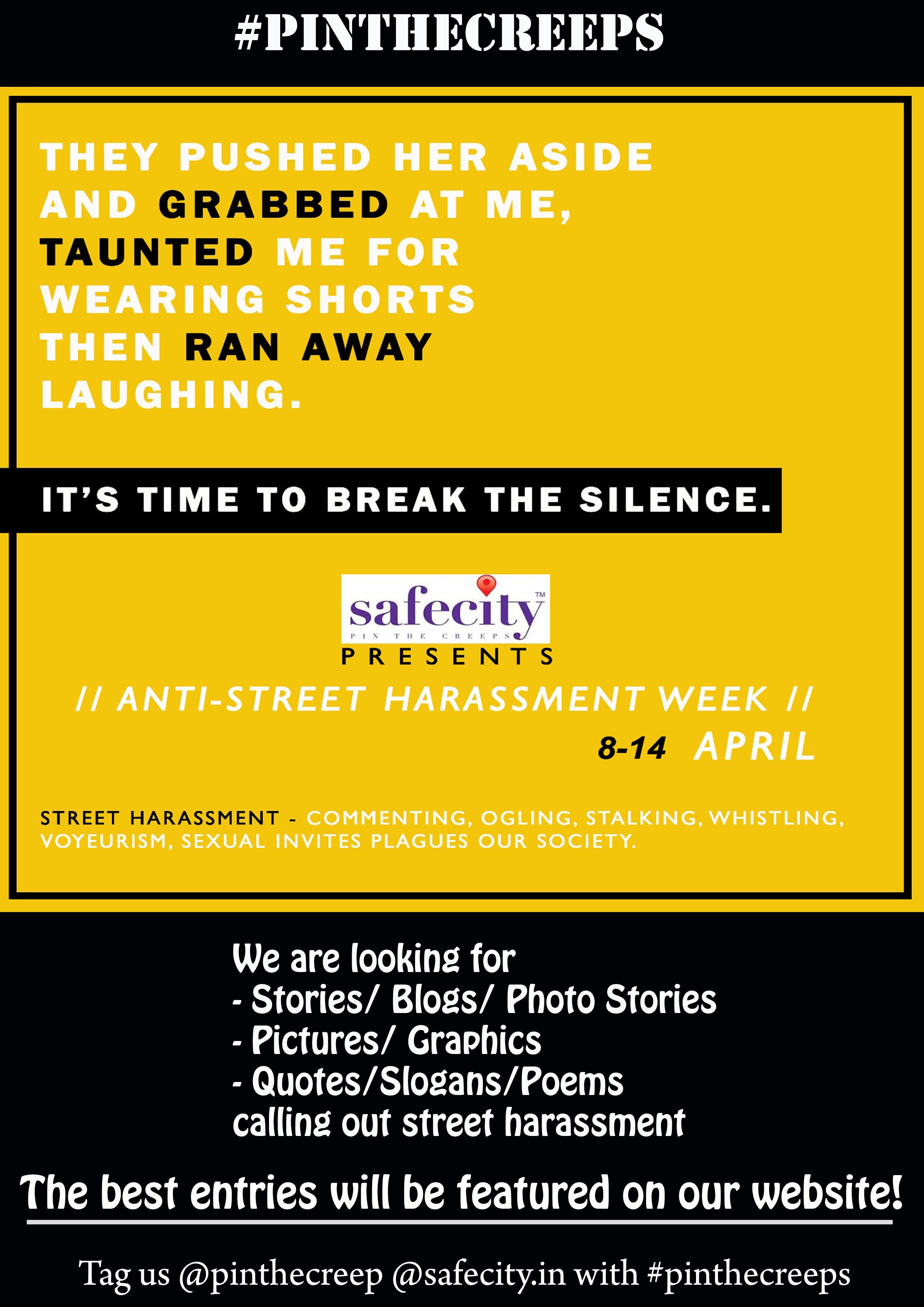 Pinky Bajaj shared with us this poem on eve-teasing 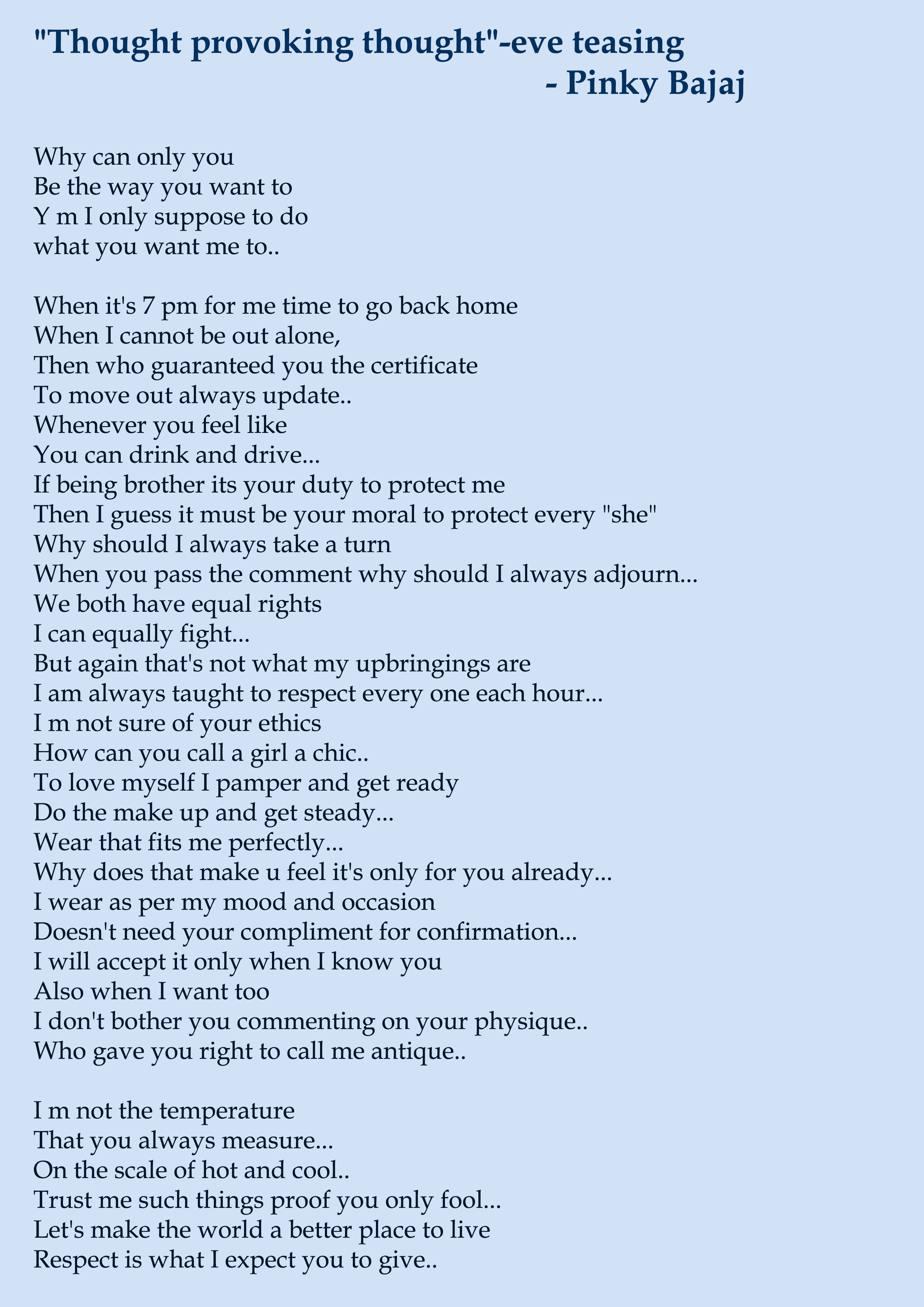 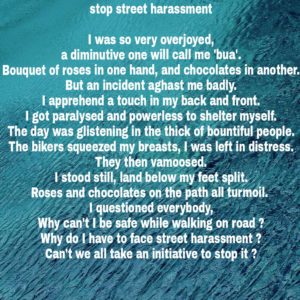 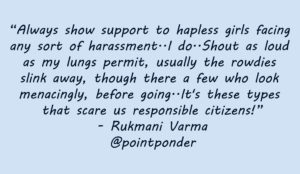 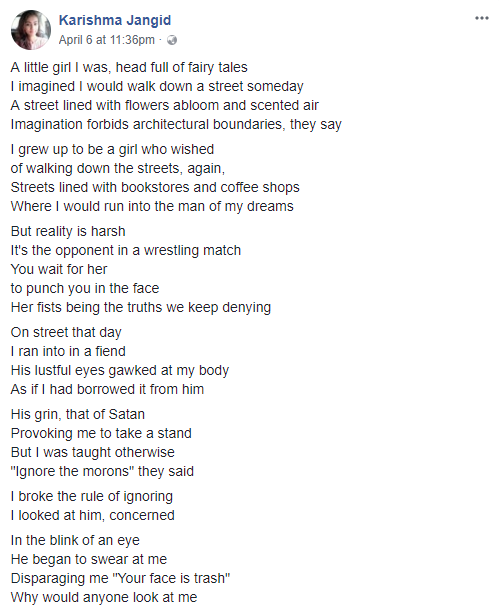 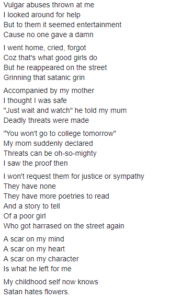 “Nor could my shrieks stop them.
They walked away.” – Mudita Gupta "I have a name, and it isn't baby." While you're walking down the street, a lot of things happen; you see the road, sky, surroundings and (inevitably) people. It's okay if they look at you and go back to minding their own business, but it's not okay if they keep looking at you and start catcalling you or making comments about you or the way you dress or the hundred other things they do, which results in lowering their dignity and your self-esteem . It's simply NOT OKAY. Help us put an end to this. Start standing up for yourself and other people who go through this. Spread awareness. #pinthecreeps #antistreetharassment #spreadtheword #stopcatcalling #notyourbaby

“She don’t.
She doesn’t walk in the shadows.
The shadow is where she was born.” writes Sabah Batul

She don't. Don't care about what others think. Don't let them break you. Don't be labelled. Don't do the don'ts. She don't. She doesn't walk in the shadows. The shadow is where she was born. She isn't broken, she bows down. She isn't labeled. She already hates what the mirror shows. She doesn't fear your abyss. She breathes better in it. She isn't a legend. Or your story to write. She isn't rabid about much. About stuff that you say matters. She isn't modest. She knows there isn't an inside. You touch her soul, it's not black. It is colorless. Like water. Taking shape of its mould, but unable to stay without support. Her mind is empty, No matter her stride. It's blank, with no note to leave. She won't leave a mark behind. She is foul, vile, loathsome, your lesser than ordinary. A mere observer who forgets. Like you will her. You take a look at her, She straps on a fake smile. So fake, she forgets what's real. She stifles herself slowly. Slowly believing in what she doesn't understand. And when her wars over, she isn't changed or victorious. Still lacks substance. Yet what you say doesn't matter. She is lost and stray. Don't try to find her for your day. She isn't yours or anyone else's. Now that you think you know her, You cannot afford her, Or try to patronize, Or make her oblige. Because… She don't. -Sabah Batul

If you faced harassment, it’s not your fault. Don’t worry about log kya kehenge.- Lizzie 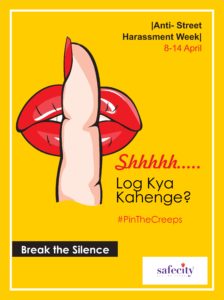 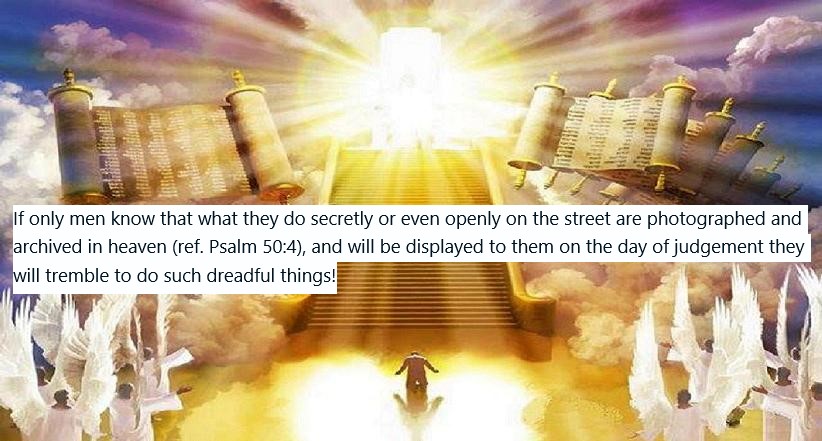 “Catcalls, sexual comments, homophobic and transphobic slurs, groping, stalking, and assault in public spaces. Gender-based street harassment is a global problem. It makes us feel less safe, it restricts where we go. IT MUST END!” – Lisa

Catcalls, sexual comments, homophobic and transphobic slurs, groping, stalking, and assault in public spaces. Gender-based street harassment is a global problem. It makes us feel less safe, it restricts where we go. IT MUST END. #antistreetharassmentweek @pinthecreep #pinthecreeps #roses #nofilter

“It’s not a compliment if it makes her uncomfortable!” – Pulkit Bhasin 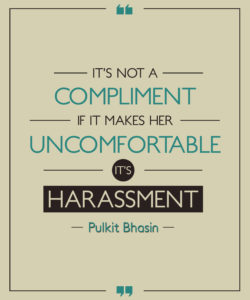 You can read her entire piece here- https://safecity.in/rise-against-the-injustice/

“Intimidation, harassment and violence have no place in a democracy.” sent  by Vipul Safety and equality isn’t a one way street.- Lizzie Braganza 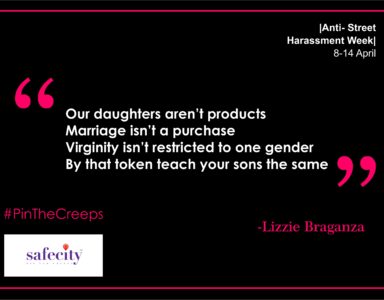 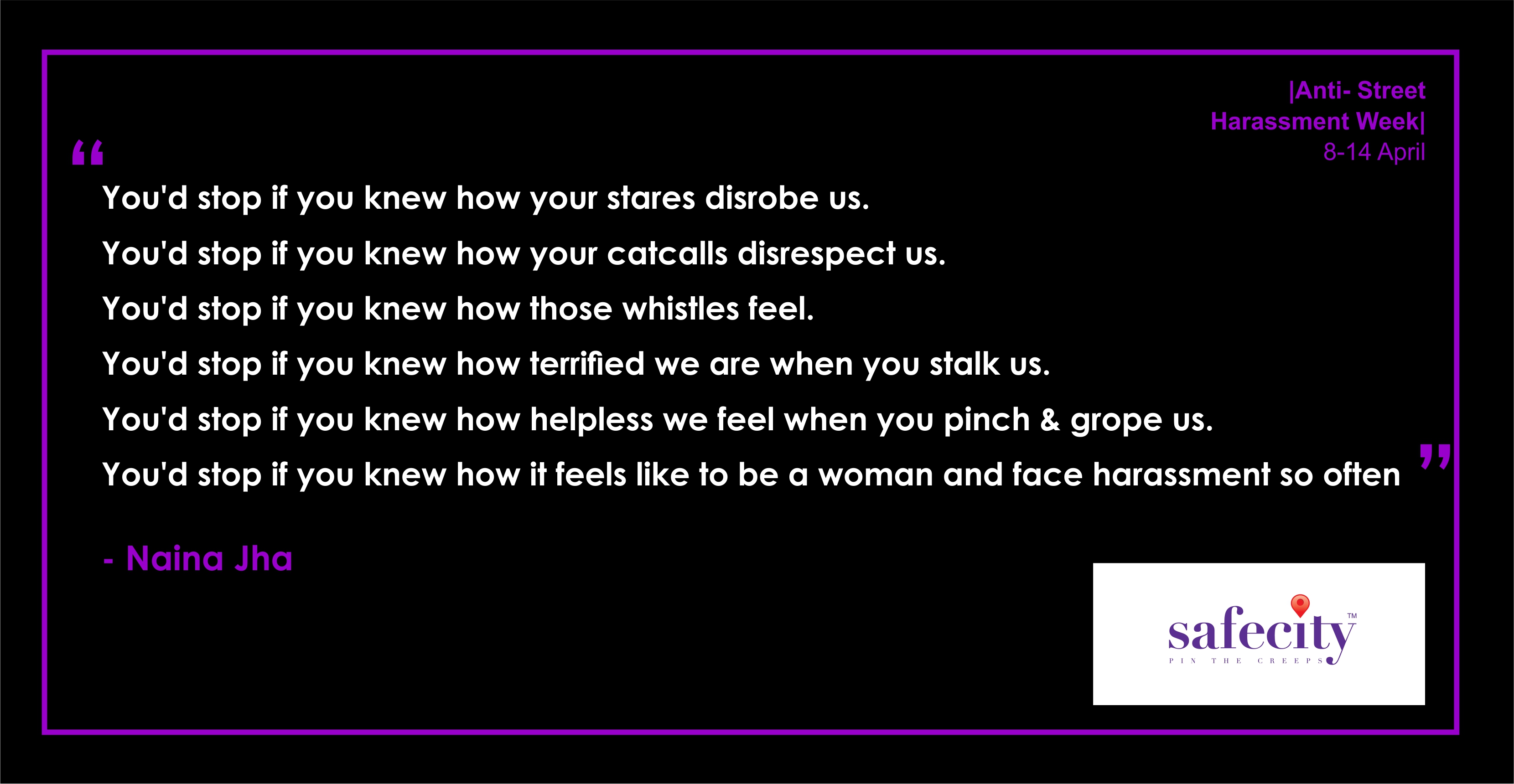 We had Jaswinder Singh, from PROTSAHAN talking about the huge battle we face against street harassment and measures that we can take.

The Battle against Street Harassment

8th-14th April, 2018 was marked as International Anti-Street Harassment week. This week was an opportunity to collectively raise awareness that street harassment happens and that it’s not okay. Safecity Delhi conducted a Mannequin Challenge is showcase street harassment.