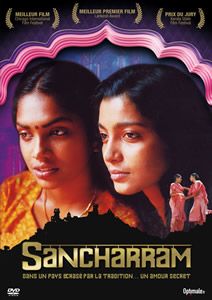 This Malayalam film was released in 2004 and it is amazing how ahead of its time it was. The film explores a lesbian relationship forged between two teens, Kiran and Delilah, in a rural area, and how their family and society react to it. Sancharram is a beautiful journey of self discovery. While the love story’s end is unconventional in terms of the happy ending we would expect, the outcome is  hopeful and realistic.

Even though Deepa Mehta’s “Fire” was based on a similar theme, it still somehow made the women’s loneliness as a factor for them turning to a homosexual relationship. Sancharram, on the other hand, makes no such explanations. The girls fall in love, because that’s what came naturally to them, no matter how unnatural it seemed to their family and gossiping neighbours.

The sensitivity with which their attraction and eventual falling out is handled, is unparalleled in contemporary cinema. The girls are like any heterosexual couple happily in love, until society decides to intervene in the form of admonition by parents, sermons of ‘repenting sin’ by religious elders, and a hastily fixed arranged marriage as the ultimate fix. As Delilah is locked up in her room by her mother for daring to love as she chooses, what hits you, is that every day, so many women are denied their right to love. Some may be locked up, or beaten up, killed, or face ‘corrective’ rapes, all in the name of ‘honour’. Kiran’s mother even tells her she needs treatment for her pervasive desire, while well-wishers point out how a girl should dress and adorn herself to be an ideal woman.

Delilah’s confusion, guilt, and fear about being in a lesbian relationship are very much a reality for many women even today. The constant concern that no one will marry a girl with a ‘tainted reputation’, and that a woman ‘needs’ a man to survive, are phrases we may have easily heard in some of our own families. Such biases place marriage as the ultimate goal of a woman’s existence. Delilah’s mother nonchalantly tells her that even as a widow who runs all affairs of her family on her own, she could only do so because marriage had given her the respect a woman needs to live in society.

Sancharram portrays the heartbreaking reality that being a woman in India is hard enough, and having an alternate sexuality as a woman is an impossible situation. But still, there is hope. As a butterfly emerges from its cocoon while Kiran watches, we know she has come to terms with who she is and how she is going to lead her life. She cuts away the long tresses her parents forced her to maintain and walks off, with the wind in her hair, and freedom in her heart. Every parent needs to watch this movie to understand that children deserve love and understanding, irrespective of their sexual orientation; that sexual orientation is not a choice but an inherent trait; that their daughters are to be cherished for who they are and not sacrificed in the name of family honour.